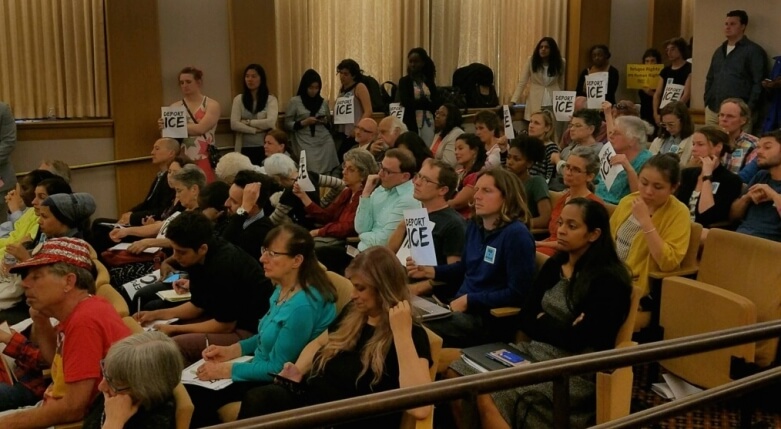 ACLU of Northern California organizer Tessa D'Arcangelew gave the following statement at tonight's meeting of the Oakland Public Safety Committee as it voted to disentangle Oakland and the Oakland Police Department from ICE's deportation machine and the FBI's discriminatory surveillance initiatives:

"Entangling our local and state governments in the dirty business of deportations is a threat to the civil rights and safety of all people. ICE does not make our communities safe, healthy, or whole.

Similarly, there is no place for racially motivated harassment of and spying on the Muslim communities of Oakland by the Terrorism Taskforce.

The entanglement of ICE and the FBI with OPD unleashes more racial profiling, wrongful arrests, and mistreatment — further undermining trust between local communities and law enforcement.

Over 600 counties nationwide, many with large immigrant populations, have decided to limit local law enforcement’s participation in federal immigration enforcement through the creation of sanctuary policies. When immigrants and our Muslim neighbors are too afraid to report crimes because they fear they will be targeted for deportation or FBI interviews, everyone’s safety suffers.

Please take note of the people who have shown up tonight to speak in support of these items. Please make the right decision for the entire community of Oakland."