For the Resistance: A Sanctuary Toolkit 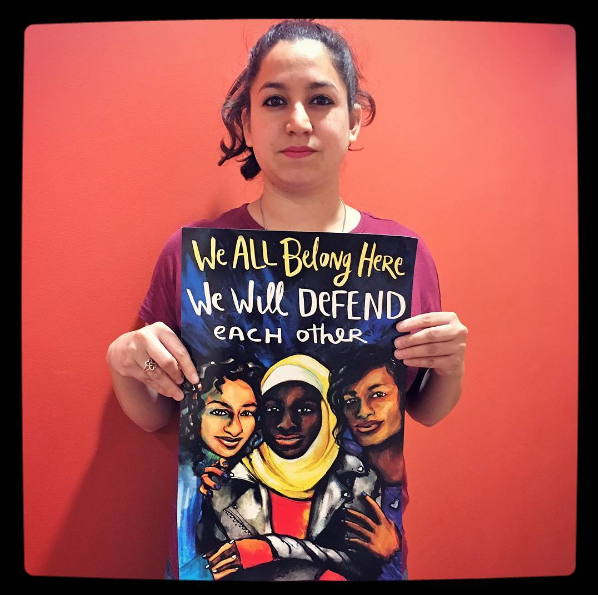 How to advance local sanctuary laws and policies in California to protect the rights of our immigrant and Muslim community members.

Among some of the most problematic directives in Trump’s Executive Orders on immigration are:

In addition, Trump’s immigration plans could lead to the federal government seeking information about noncitizen residents who access public services and institutions. He has said that he will rescind existing federal immigration policies, which may include a long-standing ICE policy that the agency will not take enforcement actions at sensitive locations, such as schools, churches, or hospitals. Courthouses may also become a site of increased immigration enforcement, as it has been in the past. For example, ICE recently arrested a woman seeking domestic abuse protection at a courthouse.

Trump's plans to target Muslim community members for federal government surveillance and registration may also depend on local and state cooperation. For example, Mr. Trump has threatened to revive the National Security Entry-Exit System (NSEERS) program adopted after September 11, 2001. NSEERS required noncitizens born in predominantly Muslim countries to register with the federal government and submit to intrusive and abusive interviews. Under that program, federal immigration agents would add the names of people who failed to register to the National Crime Information Center’s (NCIC) “wants and warrants” list, purporting to authorize any local law enforcement agency that encountered these people to arrest and transfer them to federal authorities.

In California, together we can stand up to Trump’s unconstitutional and un-American plans.

We must act now. It’s on all of us. We must get together and organize with our neighbors and other concerned residents of our communities to stand up and actively resist Trump’s anti-immigrant, anti-Muslim agenda (check out this basic primer on organizing). Further, we must urge our local officials to take a stand and ensure that our public entities and institutions in California in no way are complicit with Trump’s agenda.

First, we must demand municipal leaders make strong, clear public statements. Mayors from cities across the nation—including New York, Boston, Chicago, San Francisco, Philadelphia, and others—have sent a clear message in response to Trump’s promises: we will protect our immigrant and Muslim community members. It matters for municipal leaders to declare that they will not acquiesce to mass deportations and discrimination of Muslim communities that would devastate their municipalities socially and economically. It is imperative that immigrant and Muslim community members be reassured that their local governments stand by them and will do everything in their power to protect them. Abstract statements or vague promises just do not cut it.

At the state level, there are several legislative efforts that can serve to resist Trump’s agenda. In particular, the State of California should ensure that no state or local resources are diverted to fuel any attempt by the federal government to carry out mass deportations or a Muslim registry. Further, immigrants facing deportation must have qualified immigration lawyers to represent them, to ensure that they have a shot at a fair immigration court hearing. And to prevent avoidable deportations, public defenders must have the necessary resources and training to adequately represent their noncitizen clients and advise them about any possible immigration consequences in their cases.

Relatedly, as enforcement priorities have been eviscerated, and individuals who are charged but not convicted of crimes and even those who have not been charged but are believed to have committed “acts that constitute a chargeable criminal offense” are now priorities for enforcement, prosecutors must abide by California Penal Code Sections 1016.2-3. They must meaningfully consider the avoidance of adverse immigration consequences in the course of charging, plea bargaining, and sentencing of noncitizen individuals. Concurrently, there must be a serious effort for decriminalization at both the local and state levels. For example, the City of Los Angeles has recently moved to decriminalize street vending, an act that for too long had led to misdemeanor charges and convictions placing immigrants at risk of deportation.

This toolkit is designed to help you advocate in your community for laws and policies that ensure that your local institutions do not cooperate in an immigration dragnet and in the targeting of religious communities. You will find here model policies that can be adopted by County Boards of Supervisors, City Councils, Sheriff’s Departments, Police Departments, and Public School Districts and Colleges and Universities. They are meant to serve as a guide for you as you work with your local officials to craft the best policies for your community.

Note: Federal law in this area can be complicated and the attached policies have been drafted to protect state and local interests and resources without running afoul of two federal statutes that place restrictions on state, local, or federal agencies and officers from limiting other federal, state, or local actors from sharing immigration status and citizenship information with federal immigration authorities. See 8 U.S.C. §§ 1373 and 1644.

The Constitution is on our side: Mr. Trump can’t force state and local government agencies to enforce his deportation plans. See this legal memorandum regarding the legality of sanctuaries (and this guidance document from the New York Attorney General). It is also a matter of ensuring that local resources are used for local government. And, as a new study shows, crime is lower and the economy is stronger in sanctuary jurisdictions.

Ultimately, these local sanctuary laws and policies can reaffirm our rights as Californians to be free from unlawful discrimination and surveillance, and uphold the human dignity inherent in each and every one of us.

In California, counties are led by boards of supervisors. These are the county legislatures that have the authority to pass county budgets and enact countywide laws and policies.

Advocacy: Board of Supervisors

Demand that your county’s board of supervisors adopt an ordinance that provides strong prohibitions against County cooperation with federal immigration authorities. Such an ordinance should also preclude any county participation in any federal “Muslim registry” type program.

A county ordinance should include provisions addressing the following:

See a proposed county ordinance for the Los Angeles County Board of Supervisors.

It is important to advocate that sheriff’s departments:

Find a sample advocacy letter sent to a Sheriff’s Department

Municipalities must pass concrete, practical policies to provide their immigrant and Muslim community members the maximum protection under the law. Generally, these ordinances are similar to the model county ordinance above but more streamlined.

Here is a sample proposed ordinance for the City of Los Angeles.

Similar to sheriff’s department policies, demand that your local police department not engage in immigration enforcement and focus instead on public trust and safety.

For example, Santa Monica Police Department Chief Jacqueline Seabrooks has explained that SMPD does not enforce immigration violations to encourage undocumented community members who are crime victims or witnesses to feel more at ease when coming forward to report occurrences of crime to the police. By not enforcing immigration laws, SMPD encourages willing participation in our community safety efforts by those who might not otherwise come forward for fear of having to disclose their immigration status and risk deportation.

It is important to advocate that police departments:

LAPD Chief Beck, for example, has said his department would not change its policy, Special Order 40, which was adopted in 1979 and bars LAPD officers from stopping people based solely on their suspected immigration status. This policy, however, does not go far enough. Here is our proposed policy for the LAPD.

There has been a significant increase in reported incidents of fear, concern, and hateful actions, including racial slurs, name calling, and intimidation of students in California and across the country.

We know, however, that California is and must be a beacon of diversity and inclusion for all students. Foremost among our rights is the fundamental right to education guaranteed by the California Constitution, and the right to equal educational opportunity enshrined in the California and United States constitutions. Long-standing federal and state civil rights statutes additionally affirm that every student in our state must be provided with an educational environment that is safe and welcoming regardless of the student’s race, ethnicity, color, national origin, religion, age, gender, gender identity, sexual orientation, genetic information, or disability. Here is a Know Your Rights for immigrant students.

In response to student and parent organizing, school districts and colleges and universities can set certain policies to protect immigrant and Muslim students from deportation and the proposed Muslim registry. See this example of an ordinary citizen who organized to have the school district become a sanctuary safe haven for immigrant students.

Many school districts have already begun to take additional measures to protect their students. For example, the Los Angeles Unified School District is opening additional centers to direct parents to social services and legal help in light of the election. In San Francisco, an automated voice mail went out to every public school parent: “We are committed to providing a safe space for learning for each and every one of our students, including recent immigrants regardless of immigration status. We will continue to uphold San Francisco’s sanctuary city for all immigrants.” This message, along with a letter, was sent in English, Spanish, Chinese, Arabic, Vietnamese and Tagalog to students and families.

It is important to advocate that school districts or colleges and universities:

​For a comprehensive resource on the sanctuary schools movement, go here. And here is a resource regarding legal issues related to schools and undocumented immigrants.

Under federal and state law, school districts have an affirmative duty to protect students from discrimination and harassment whether perpetrated by district employees or by students. Both the United States and California Constitutions guarantee students equal protection under the law and free expression of religious faith.

Demand safe schools from your School Board and Superintendent.

School Board: Every school district in California is governed by a board of several elected individuals, commonly referred to as the “school board.” The School Board has exclusive authority to adopt rules and policies, which are called “board policies,” that govern school employees and students. In addition to board policies, school boards can also adopt resolutions, which typically include two sections. The first section describes the history and facts behind the issue giving rise to the resolution. The second section sets forth the district’s proposed course of action. In some circumstances, a resolution alone can create actual policy change. More often, however, school boards should supplement the resolution with board policies that establish concrete guidelines about what the resolution requires or prohibits.

If you are unsure how to approach your school board, check out our Parents’ Guide to School Board Advocacy in California, which explains how to connect with your district’s school board members through letter, phone call, and public comment at school board meetings. You can also start a petition (find a sample petition here).

Our ACLU of California letter to superintendents throughout California that provides recommendations for superintendents to implement policies immediately to create a safe, inclusive, and equitable educational environment for all students in our schools.

A toolkit for advocates for undocumented youth and unaccompanied and refugee children currently living in the United States.

As with schools, start a petition for colleges or universities to adopt certain policies and take concrete actions, like those mentioned in the introduction section above (find a sample petition here for UCLA).

Pitzer College also released a strong letter in support of its students.