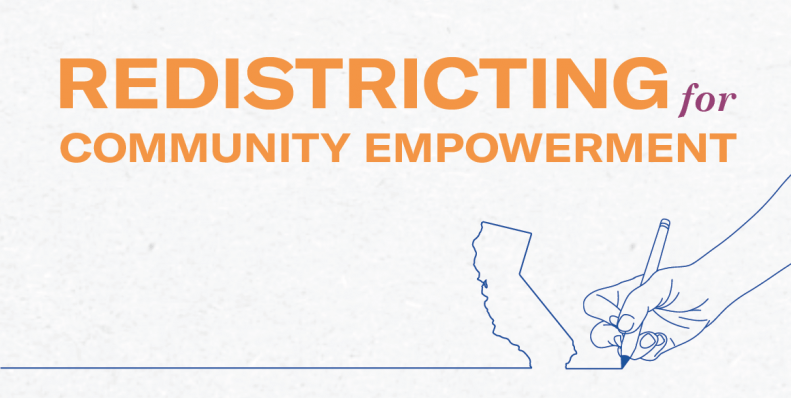 Redistricting is a process that takes place every decade to redraw maps used to elect public officials, such as members of congress, city council members, and school board members. The way district lines are drawn will not only impact who communities have the power to elect, but ultimately their ability to shape the local, state, and federal policies that affect their everyday lives for years to come, from ordinances on local minimum wage and sick days, to policies on affordable housing, how we support people who are unhoused, police accountability and k-12 education.

Below, you can find resources to get involved and help draw lines that represent you and your community!

What are single-member district elections?

There are other forms of electing representatives. For example, at-large elections are a system where all voters in a jurisdiction vote for every seat in the legislative body. Redistricting, however, only applies to jurisdictions that use voting districts.

Redistricting is a process that takes place every decade to redraw district maps used to elect public officials. The primary purpose of redistricting is to ensure that each district is substantially equal in population so that each person is equally represented in government. But there are other very important considerations that are served by having decennial redistricting. This includes, among other things, ensuring that district maps do not dilute the vote of historically disenfranchised communities and ensuring that communities of interest and neighborhoods are kept together.

Why is redistricting important?

District lines adopted this cycle will be in place for the next ten years, and these lines may affect how lines are drawn in future decades.

At the most basic level, the way district lines are drawn impacts who communities have the power to elect. Keeping communities together makes it easier for them to elect preferred candidates. If communities, however, are improperly split apart this makes it harder for them to elect candidates. Communities can also be packed into districts so that they have influence in fewer districts than their size merits. To prevent these sorts of abuses and manipulations, there are federal and state laws that provide communities with protections in the redistricting process.

Where lines are drawn impacts not just who gets elected but, in turn, also impacts communities’ ability to shape the local, state, and federal policies that affect their everyday lives. This includes everything from ordinances on local minimum wage and sick days, to policies on affordable housing, how we support people who are unhoused, police accountability, and K-12 education.

Who draws the lines?

Historically, members of the legislative body (e.g., county boards of supervisors, city councils, and governing boards of school districts) have drawn the lines, and this remains the practice today in most jurisdictions. It has become more and more common, however, for redistricting commissions to draw the lines. This includes advisory commissions that recommend but do not adopt maps, independent commissions that have the power to adopt maps without input from legislative bodies, and hybrid versions of the two. For example, the California Citizens Redistricting Commission is an independent commission that will be drawing the lines for congressional, state legislative, and board of equalization maps. Other examples include the City of Los Angles, which has an advisory commission, and San Diego County, which has an independent commission.

What are the basics of line-drawing?

There are many factors that go into redistricting. The following criteria, however, guide all line drawing:

Maintaining communities of interest is one of the most important traditional redistricting principles. A jurisdiction’s communities of interest are its overlapping sets of neighborhoods, networks, and groups that share interests, priorities, views, cultures, histories, languages, and values. Line drawers depend on the public’s testimony to identify these communities.

To learn more about redistricting criteria, including communities of interest, you can refer to our guide: Redistricting for Community Empowerment.

What is the timeline for redistricting?

Redistricting is happening now! Jurisdictions across the state are already holding meetings to inform the public about the process and to receive testimony about communities of interest.

The final deadline for jurisdictions to adopt maps depends on when they are having their next regular election. The California Citizens Redistricting Commission and cities and counties with June 2022 primaries must adopt maps in December 2021, while cities without primaries have until April 2022. School districts, county boards of education, special districts, and some charter cities have deadlines varying from late-February to May 2022.

How can I get involved?

Depending on the jurisdiction, line drawers must hold anywhere from one to seven or more public hearings to receive testimony from the public on where the lines should be drawn. The California Citizens Redistricting Commission and most cities and counties are also required to have a page on their website on their redistricting process. You can get involved in the process by attending meetings or submitting written feedback on your communities of interest. To access resources and learn more about the various ways to get involved, visit our page on redistricting. If you have any questions, you can email us at redistricting@aclunc.org (ACLU of Northern California) or redistricting@aclusocal.org(ACLU of Southern California).

This Local Redistricting Legal Guide is geared towards community-based organizations interested in engaging in the local redistricting process, but everyone can benefit from reading this guide. The Guide provides fundamental information, including:

Throughout the Guide, we provide tips about how community organizations can best engage with the decision-making bodies and advocate on behalf of their communities. It’s not just a how-to guide, it’s a legal how-to guide so it cites to key cases, statutes, and explains how different choices may be viewed by courts.

Below you will find information about California ACLU affiliates’ redistricting advocacy work, including letters to public officials. We will update this page as our work develops.

Letter to Madera County Board of Supervisors Regarding Supervisorial Redistricting Process (October 25, 2021)

Letter Regarding the Selection of Commissioners for the LA County Citizens Redistricting Commission (December 15, 2020)

Below you will find news, updates, and blog posts regarding our redistricting work.

Many of our partners have created incredibly helpful redistricting tools and resources. We recommend checking this out as you engage in redistricting advocacy.

If you weren't able to make it to our Redistricting 101 training session, we got you covered! Bookmark and watch the video of our first training session that covers the basics of the redistricting process and why it matters for our communities.
Watch the Recording