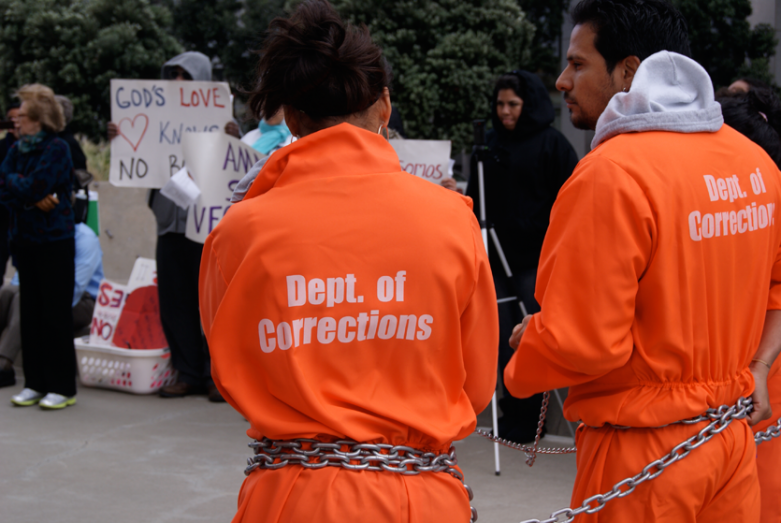 A class action settlement ending the blanket policy of shackling adult detainees in immigration court, regardless of their history or capacity for disruption.

On Jan. 23, 2014, the District Court preliminarily approved a class action settlement in this case. The Court has ordered the parties to provide notice of the settlement terms to members of the settlement class so that they can file objections to the settlement agreement before the Court’s final approval hearing on April 10, 2014.

In August 2011, the American Civil Liberties Union Foundation of Northern California (ACLU-NC), the Lawyers' Committee for Civil Rights of the San Francisco Bay Area (Lawyers' Committee), and Wilson Sonsini Goodrich & Rosati (WSGR) filed a class action suit against the Department of Homeland Security (DHS) and the U.S. Immigrations and Customs Enforcement Agency (ICE) on behalf of adult immigration detainees, all of whom were forced to appear in immigration court shackled at the wrists, waist, and ankles, regardless of their history or capacity for disruption.

At the time the complaint was filed, there were no channels to challenge application of the practice based on individual risk level, potential for flight or medical care needs. People are held in immigration detention for a variety of reasons, including because they could not raise the money to post bond, ICE or court officials believe they pose a flight risk or other possible danger, detention is mandatory under federal immigration law, or they are not eligible for bond because they have committed a crime of "moral turpitude," such as passing a bad check. The lawsuit asserted that being in detention—for one of these many reasons—is not a legitimate basis to subject individuals to shackles in immigration court.

The lawsuit was filed in U.S. District Court in San Francisco by four individuals on behalf of a class of people who are or will be detained for their immigration proceedings in San Francisco. The suit called for replacement of ICE's blanket policy on shackling detainees in San Francisco immigration court with a case-by-case policy that would protect due process rights while maintaining ICE's ability to use restraints as needed for individuals who pose a true security threat.

Uelian De Abadia-Peixoto, a 35-year-old woman from Brazil currently in immigration custody in Yuba County, is one of the plaintiffs in the suit. Ms. De Abadia, who has no history of violence or disruption in court, has plastic and steel plates in her knees, legs, feet, back, and head. The shackles used during transportation and in-court proceedings aggravate her previous injury and current medical condition. An asylum applicant and domestic violence survivor, Ms. De Abadia's injury from being shackled is intensified by the memories of being bound and raped by her abusive husband and his brother. At the time the complaint was filed, Ms. De Abadia had been placed in metal hand and leg restraints for travel to and participation in immigration court proceedings on about five occasions.

Another plaintiff in the case, who had developed permanent nerve damage, also due to a previous injury, experienced intense pain when he was shackled for his immigration court appearances. Neither of these plaintiffs had a history of violence or disruption in court; they would have posed no threat to the safety and security of the courtroom or threat of flight had they been allowed to appear without physical restraints.

The suit is expected to have national implications. ACLU Foundation of Northern California staff attorney Julia Harumi Mass was appointed class counsel along with attorneys from the Lawyers’ Committee for Civil Rights of the San Francisco Bay Area and Wilson Sonsini Goodrich & Rosati.

Notice to the Class

Opposition to Defendants' Motion to Dismiss

Reply Brief in Support of Plaintiffs' Motion for Class Certification

Memo in Opposition to Plaintiffs' Motion

Vote NO on the CA Recall