Stop Trump's Illegal Ban on Trans People in the Military 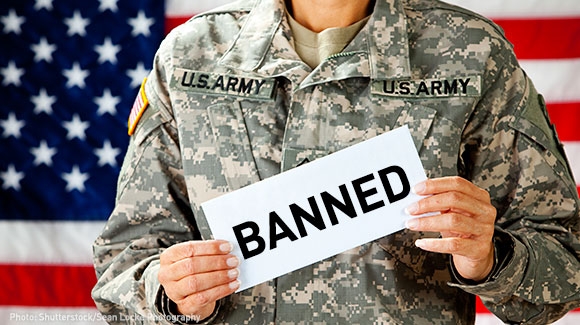 In an early-morning tweetstorm, President Trump announced a shattering new plan to ban transgender individuals from serving in the military. This is unacceptable – and illegal.

Trump has no basis for his assertion that the U.S. military is “burdened with the tremendous medical costs and disruption” because transgender people serve in the military. The cost is almost zero. Disruption, non-existent. In fact, a 2014 report co-authored by a former U.S. Surgeon General concluded that the then-ban on transgender military service wasn’t based on sound medical reasoning.

But of course, we know this plan has nothing to do with facts. It’s about ignorance and prejudice and fear.

Anyone who wants to serve and protect our freedoms deserves the same rights as everyone. Period.

Trans people – particularly youth – are already subject to some of the highest rates of bullying, harassment, hate crimes, discrimination, and suicide. This decision will only further alienate the transgender community.

The thousands of transgender service members serving on the front lines deserve better than a commander-in-chief who rejects their basic humanity. Add your name to take action now.

Don’t ban transgender people from military service. Such an illegal, cruel, and discriminatory policy would be based on nothing more than your own ignorance and prejudice. We will fight back and win.