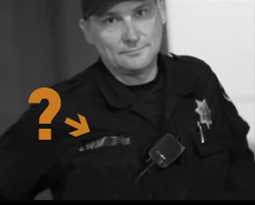 You’ve seen police uniforms on TV. Some have medals, some have stripes, some are blue and some are tan, but they always have a badge, and a little nameplate on the chest bearing the officers name. In California, officers are required by state law to wear that nameplate identifying them. Why? Accountability.

A strong democracy requires transparency. And today the California Supreme Court gave a boost to transparent policing by ruling that the names of officers involved in shootings aren't confidential under state law.

At issue in this case are officers from the Long Beach Police Department who shot and killed 35 year-old Douglas Zerby in December 2010 when they mistakenly believed the garden hose nozzle he was holding was a gun. In response to the concerns that the shooting might indicate deeper problems within the police department, a Los Angeles Times journalist filed a request under the California Public Record Act seeking the names of the officers involved in that shooting, and other shootings in the preceding five years. The City of Long Beach refused to disclose that information, and fought the Los Angeles Times all the way to the California Supreme Court to keep it secret. The ACLU of California filed an amicus brief arguing that the public has the right to know the names of officers involved in shootings. In today’s ruling the state Supreme Court agreed with us.

A need for sunlight

Officers have extraordinary authority – to investigate us and our neighbors, to detain us to conduct investigations, to search us or arrest us if they have reason to believe we’ve committed crimes.

But with great power comes great responsibility…and, in a democracy, a great need for transparency. Supreme Court Justice Louis Brandeis famously said that “sunlight is the best disinfectant.” And policing experts – from the Christopher Commission that examined LAPD in the wake of the Rodney King incident to the 9/11 Commission – have observed that public disclosure provides the strongest form of oversight. Because police must identify themselves at all times, they know that if they engage in misconduct they can be reported and held responsible for their actions. A “secret police” isn’t usually a hallmark of a free democracy, for good reason.

A police officer’s decision to use his or her authority to shoot to kill is the ultimate government power. And that’s when the need for transparency and accountability is the strongest. When names of the officers involved in a shooting are disclosed to the public, the media and the community can tell when a particular officer is responsible for string of shootings or when a department seems not to notice that the same officers are shooting again and again. We’ve seen this in Oakland and Fresno, for example.

So why is this even an issue? Under the California Public Records Act, government agencies must make records readily available upon request. But the law also makes an exception for police officers’ personnel records, so that matters like complaints against officers, internal investigations, or discipline aren’t open to the public.

There’s reason to think that law is too broad – Californians have a right to access sustained complaints of misconduct against other government employees, but not police officers, who have the most power.

But in this case, the police department went even further, arguing that the law extended beyond even personnel investigations – that because there’s an investigation into every shooting, the names of officers involved in a shooting would reveal confidential information about internal investigations.

In our amicus brief, the ACLU of California said that argument was too broad, as it would have made many of the details of the how police departments operate confidential and drawn a shroud of secrecy over what happens in the most serious incidents where the public’s right to know should be strongest.

To be sure, courts should retain the authority to withhold disclosure when there’s a specific threat of harm if the officer’s name were released. But officers do all kinds of things that might expose them to retribution – they enforce the laws, arrest criminals, testify against criminals in trials – all publicly. There’s no reason that shootings should be anonymous, and today’s ruling rightly makes clear that even general evidence that officers might face retaliation isn’t enough to withhold information; there must be a specific threat of violence.

We’re cheering today’s ruling, but there is still more to do. It’s still too difficult to get information on how public departments have handled certain incidents, which can reveal in practice what their policies are and what they are not.

When the public and the media have access to this kind of information about police officers, it can be an important tool for change in departments where there are problematic patterns. Ultimately, transparency is a check on the power that police hold – and that is crucial for our democracy.

Peter Bibring is a senior staff attorney at the ACLU of Southern California.