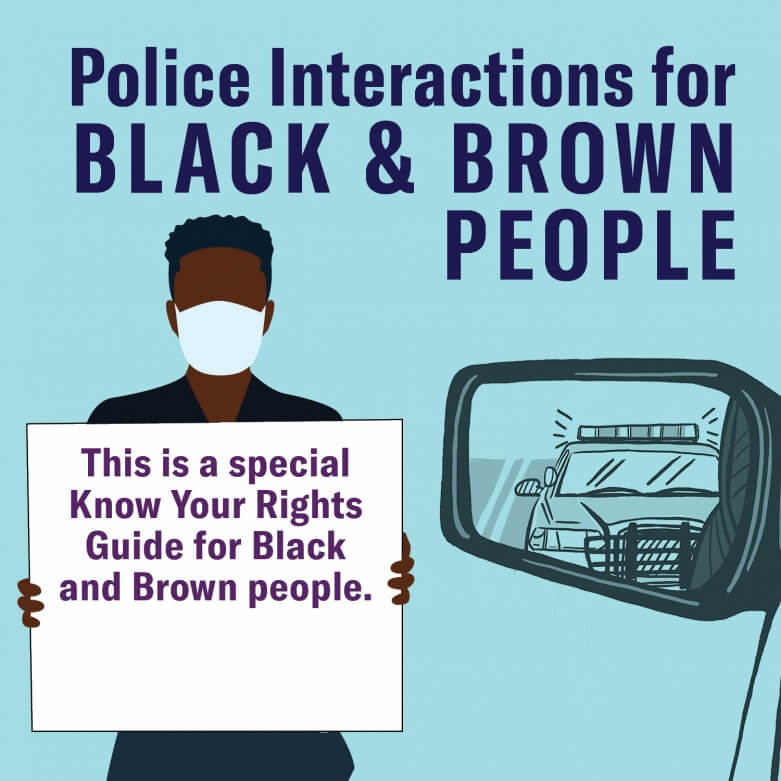 Black and Brown people are also more likely to be detained, handcuffed, searched, and have police point guns at them. These encounters aren’t just stressful; as history and recent events have shown, they can be deadly.

Here is information to let you know what your constitutional rights are during police interactions. But it’s important to remember that even though you have legal rights, you must use good judgment in deciding when to exercise them. If a law enforcement officer starts acting in an aggressive way toward you, it might not be wise or safe to assert your rights in that moment. If you believe your rights were violated, you can file a complaint against the law enforcement officer once you are no longer in a potentially harmful situation.

The Dos and Don’ts of Police Pedestrian Stops

If you are stopped for questioning, DO...

If you are stopped for questioning, DON’T...

If you are searched, DO…

If you are searched, DON'T…

The Do’s and Don’ts of Police Car Stops

If you are pulled over in a traffic stop and have a hands-free phone station in your vehicle, consider turning on your camera to record the interaction. Make sure to do this before the officer gets out of the police car so they don’t see you and mistakenly think you are reaching for a weapon.

If you are stopped in your car, DO...

NOTE: An AB 60 license, issued with proof of identity and California residency, should be accepted by state and local law enforcement in California, the same as other state-issued IDs.

If you are stopped in your car, DON’T...

The Do’s and Don’ts of Arrests

If you are arrested or taken to a police station, DO...

If you are arrested or taken to a police station, DON’T...

Pdf version available in English here and in Spanish here.