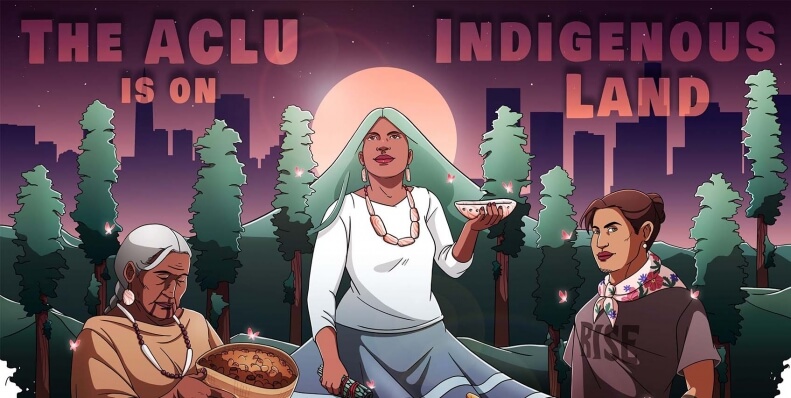 We acknowledge that the ACLU of Northern California exists on the occupied territory of over 100 tribes. This land has been stewarded by Indigenous people since time immemorial.

We acknowledge the critical importance of the land and water to the Indigenous peoples of California today, and that the existence of tribal communities and preservation of traditional Indigenous ways of life depend on secure and permanent land bases and the right of self-determination.

We recognize the painful history upon which the state of California was created, and how policies, systems, and structures continue to oppress and erase Indigenous peoples today.

Beginning with the brutal Mission system during the Spanish colonial period, this history continued through genocide sanctioned and funded by the new state government as California entered the union. Laws and policies sought to erase Indigenous peoples altogether. These included the malignant 1850 “Act for the Governance and Protection of Indians,” termination and continued non-recognition of California tribes and tribal governments, and prohibition of traditional and cultural practices. For the past two centuries, tribal communities have been displaced from and dispossessed of their ancestral lands, sacred sites have been destroyed, and families and communities have been torn apart through residential boarding schools and relocation programs.

We further recognize the diverse Native American diaspora of California, including thousands who were brought here from other parts of the United States without their consent or through false promises of opportunity. These policies had a purpose: to permanently remove Indigenous communities from their ancestral lands, force their assimilation, and erase their culture and identity.

Our shared history compels us to grapple with this legacy, taking action to interrupt the continued harm of colonialism and genocide and to redress the erasure of Indigenous peoples.

The ACLU of Northern California is committed to working alongside Indigenous peoples—and following their lead—as they work to uphold their sovereignty, dignity, and identities.

We support and defend the rights of all Indigenous peoples to retain their specific cultural and religious traditions and practices. We strive to honor Indigenous cultures and traditions and, when possible and appropriate, integrate Indigenous worldviews and values into our approaches and strategies.

By committing ourselves to Indigenous justice, building authentic, mutual, and lasting relationships with tribes and Indigenous communities, we honor all Indigenous people who work tirelessly towards justice and healing. 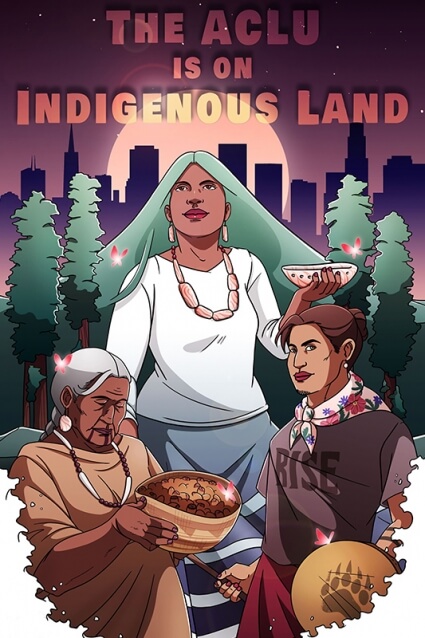 Jackie Fawn is a Yurok/Washoe/Filipino artist who currently resides in Mohawk territory, Akwesasne. She uses her art to address social and environmental issues in Native American communities.

"This art is how I see the vast beauty and rich culture of Native California. From the ancient redwood giants to the concrete towers of the city, California (as the rest of the country) will always be Native Land. It is important to honor and recognize the land we stand upon.

This illustration is of a woman standing strong with the medicines our ancestors prayed with, a Two Spirit youth holding the drum and songs of our ancestors and wearing red for our MMIP (Murdered and Missing Indigenous Peoples), and of an elder, who has carried the knowledge of our ancestors for us to carry into future generations."

A land acknowledgement can be a simple, powerful gesture to honor Indigenous peoples and lands and recognize our shared history. A land acknowledgement is only a beginning, and if done respectfully and intentionally, can lead to greater public awareness and understanding of Indigenous Justice. It can help us and our audiences further narratives that honor and recognize our collective history and the current struggles and strengths of Indigenous peoples. Combatting erasure is a first step towards greater cultural awareness, necessary as a foundation to work towards justice. And for many, land acknowledgements can serve as a first and important introductory step into Indigenous Justice.

The most basic acknowledgment can be very simple:
"We would like to begin by acknowledging that the land on which we gather is the occupied/seized/stolen ancestral/traditional land/territory of the _______ People."

It can name the common history that is so often ignored:
"We are gathered today on the ancestral and seized land of the _______ People. We recognize them, the legacy of violence, settlement, and displacement these people suffered and survived, and we recognize the important of reverting this common history, of which we are all a part, by engaging in meaningful indigenous justice work today."

And it can both name colonialism and its harms, and name what that commits us to doing (and even, invite others to join):
"We would like to begin by acknowledging that the land on which we gather is the occupied/seized ancestral land/territory of the _______ People. We recognize that these people cared for and stewarded this land for generations prior to our arrival.  And we call attention to the history of the US and the state of California towards these peoples, through state-sanctioned and state-funded genocide, residential boarding schools, and laws and courts that sought to erase indigenous peoples altogether. We recognize how these systems and structures continue to impact indigenous peoples today. This history compels us to take action to interrupt the legacies of colonialism and genocide, and calls us to take meaningful action, building authentic and mutual relationships with Tribes and indigenous communities towards justice and sovereignty."

The process to reach our land acknowledgement statement – and engage across our organization in this ongoing practice to recognize the Indigenous peoples who came before us and who continue to fight today – has been critical to the creation of the statement itself.

Working with an internal committee, made up of staff and Board members that identify as Indigenous and of people connected to our Indigenous Justice work; based on research and guidance on land acknowledgements; and in consultation with tribal leaders in our region, we drafted an institutional land acknowledgement statement.

We worked with a California Indian artist, Jackie Fawn, to create a visual to accompany our statement – and paid her for her work. We then sent the draft statement to more than a dozen tribal councils throughout our region with whom we have existing and sometimes long-standing relationships, along with tribally-affiliated and Native-led organizations in Northern California, to seek their input.

We will continue to engage our allies, members, donors, staff, and the broader community to join us in this ongoing, reflective process of acknowledging the land we are on and the Indigenous peoples who belonged to the land, and in deepening our commitment to Indigenous Justice.

The institutional statement is not intended as a script to be read from at public events.