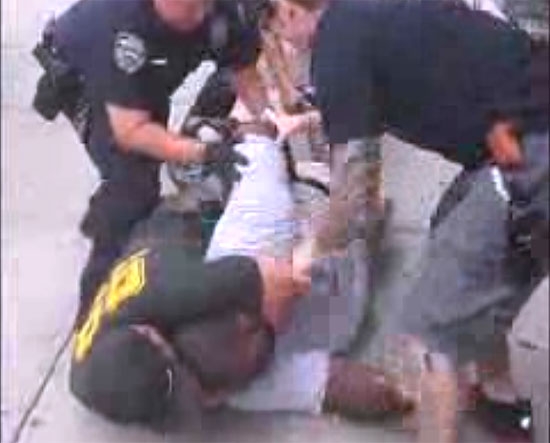 Perhaps the most surprising thing about yesterday's announcement from the Staten Island grand jury is our own surprise at the outcome.

After years of hearing of the killing of unarmed black men by police officers with no accountability and no widespread acknowledgement beyond particular communities that a problem even exists, the news that there would be no criminal liability for the death of a man at the hands of a phalanx of police officers in the course of an "investigation" into the sale of loose cigarettes is just the latest installment in a sad, unending serial about the improper use of force by law enforcement against people of color.

But this time seemed different because of the existence of a videotape that clearly showed the grotesque use of what turned out to be deadly force by a group of police officers the size of which would have been appropriate for the investigation of a serious, deadly offense rather than the most minor of nuisances.

Surely, in the face of the shocking video, no grand jury could decline to initiate a criminal proceeding during which all of the facts could be explored and presented in a public proceeding with all of the due process protections which attach to those proceedings.

But those hopes turned out to be unrealistic. When the results were announced, I found myself thinking, improbably, of an old Richard Pryor comedy routine in which a man, caught in bed with his girlfriend by his wife, argues his innocence of clear infidelity by asking, "Who are you going to believe, me? Or your lying eyes?"

This time the clear testimony of what was seen and recorded, along with the truth itself, lost out. We are all left wondering what will have to happen before there is accountability and an honest recognition of the enormous problem we face as a country, as the bitter taste of despair fills our mouths.

Out of the depths of this despair, there comes some hope that there may be the chance of some progress notwithstanding the long history of police violence and discrimination against communities of color. Increasingly, there is some indication of the collective sense of alarm and recognition of the need to discuss that is necessary before there can be any meaningful change. The white mayor of New York City has painfully acknowledged his fear for the safety of his own black son at the hands of his own police department. Protestors of all races have risen up in greater numbers to speak up for accountability and change. And, increasingly, there are discussions of things too long denied by too many: that there are, in fact, two systems of law enforcement in this country.

In a recent interview on WNYC, New York City's public radio station, a Brooklyn man scoffed at the notion that he should fear police while carrying marijuana, observing that they would never stop him because he is white. The twitter hashtag #CrimingWhileWhite documents story after story like this of whites who suffered no criminal consequences after engaging in behavior far worse than selling loose cigarettes. It is past time that we admit what so many have known for too long: That all too often, our justice system simply is not just.

On the videotape of his killing, Mr. Garner is heard explaining that he did nothing wrong and that he was tired of the daily harassment and abuse to which he was subjected. We cannot allow his sadly prophetic next words, "It stops today," to refer only to his life. We owe it to him and to ourselves as a nation of laws to make sure that the day of his death is also the beginning of the end of the unlawful and discriminatory use of force by police all over the county.