On Immigration, a Ray of Fairness Shines Bright in California 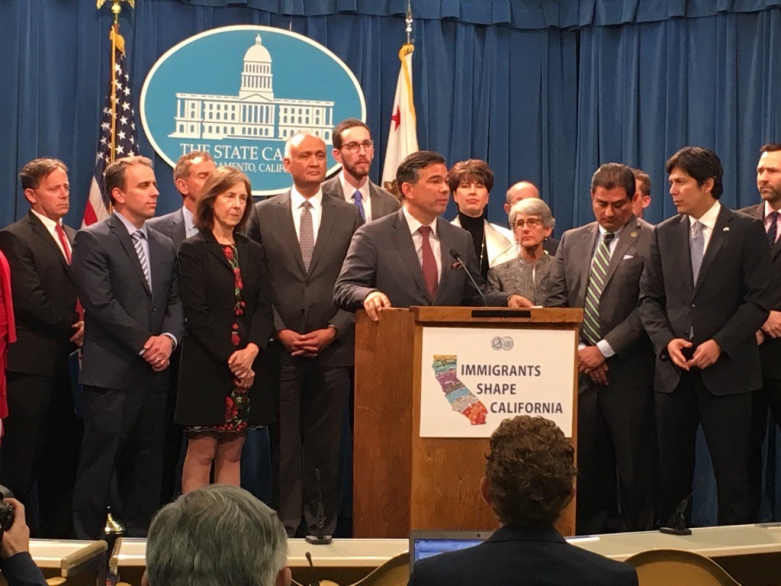 California state lawmakers recently introduced three groundbreaking bills that could prevent thousands of immigrants from being torn from their families, communities, and the lives they built in the United States.

Similarly, AB 3 provides our public defenders with the necessary resources and training to adequately advise their clients about any possible immigration consequences in their cases. If passed, California would take a significant step toward helping prevent avoidable deportations.

SB 54 ensures that no state or local resources are diverted to fuel any attempt by the federal government to carry out mass deportations or a Muslim registry. The bill rightly turns off the valve to a mass deportation pipeline and closes the door on shameful attempts to scapegoat the Muslim community in California, a state that values diversity, public safety, and the humanity of all its residents.

By introducing these bills, the Golden State is standing firm in its resolve to uphold its values of fairness and due process. This is huge.

In a recent interview with 60 Minutes, President-Elect Donald J. Trump said that he planned to deport some three million immigrants—allegedly all “criminal immigrants.” Many people, myself included, were alarmed to hear this. The details of these new mass-deportation policies remain unclear, although some reports have surfaced that the policies would include anyone who has ever been arrested, even if the person was later found innocent or the charges were eventually dropped.

But California is moving in the opposite direction and instead undertaking efforts to make things fairer for immigrant and Muslim communities. Due process, the idea that everyone deserves fair treatment by our government whenever any of their civil liberties are at stake, is a cornerstone of our democracy and one of the most cherished American values.

And at bottom, that is what these three bills are all about: fairness. It is about how we treat other human beings and about bringing some semblance of fairness into an inherently unfair immigration system.

Because the fact is that our immigration system is deeply flawed and outdated, and relies on an equally flawed and biased criminal justice system as its deportation pipeline. Many of the people with arrests or convictions have been subjected to racial profiling and discrimination.

Take for example the California Gang Database (CalGang). For years, community members and advocates alike denounced CalGang as an error-prone database that lacks transparency and accountability, and relies on racial profiling and discrimination. This year, a state audit confirmed what many of us have been saying all along when it revealed that 42 children younger than one year had been erroneously included in the database. Yet we know that the federal government relies on CalGang data to deport immigrants.

More importantly, these three bills recognize the humanity of people who have arrests or convictions, rather than playing into anti-immigrant attempts to demonize entire communities in one fell swoop, which were all too common during the presidential campaign. We must remember that people put at risk by President-Elect Trump’s deportation threat are members of our communities that have long ago served their time and changed their lives. They include immigrants like deported veteran Fabian Rebolledo, who served as an Army paratrooper from 1997 to 2000, including duty in Kosovo in 1999. In 2010, he was deported following a conviction for writing a bad check. He is 100 percent disabled due to his military service and a VA doctor has confirmed he suffers from PTSD. His U.S. citizen son was 10 years old when Fabian was deported.

In California, we do not abandon people like Fabian just because he has a record. We stand by him and his family and fight for him to get a fair shot in his immigration case.

We thank the legislators championing AB 3, SB 6, and SB 54 for their ability to see past demonizing rhetoric and prioritizing diversity, true public safety, and the humanity of all Californians. And to the countless immigrants that call California home, we hope they know that the ACLU will always stand by their side.

Carmen Iguina is a staff attorney with the ACLU of Southern California.