These Central Valley Residents Designed Their Own Public Transit Line, and They’re Just Getting Started 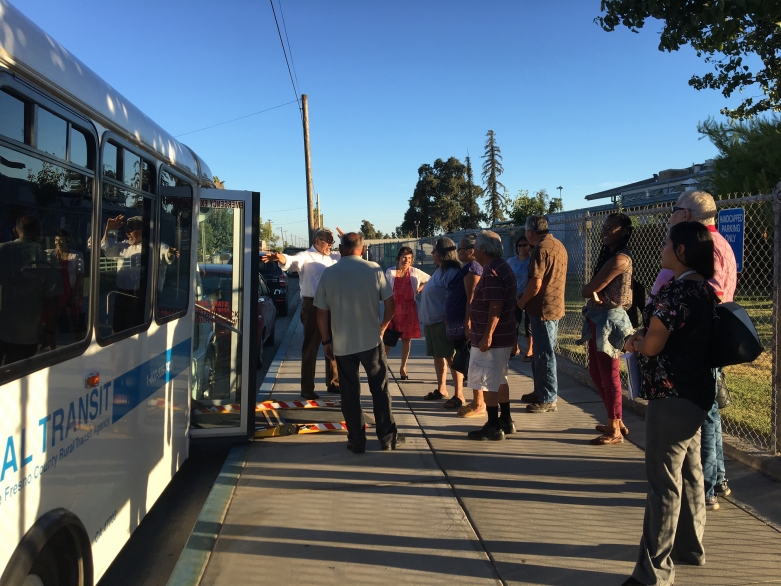 The community of West Park sits less than half a mile outside the city limits of Fresno. It’s a small place, around 130 homes, and tightly-knit. If you ask residents why they live in West Park, you’ll likely receive a variation of “I love it here, we are like family,” quickly followed by “it’s quiet, unlike the city.”

The community has a rural feel: on any given evening there are men on horseback riding slowly down Prospect Ave, the main street in the community; a number of residents raise chickens and other livestock. Farmworker families are common, and many residents work long hours in fields and packing houses supporting the San Joaquin Valley’s booming agricultural industry. The organization I work for, California Rural Legal Assistance, Inc, (CRLA) has spent more than half a century working side-by-side with residents in communities like West Park.

Despite its proximity to the city, West Park is unserved by infrastructure and services most urban Californians take for granted. The community lacks sidewalks, a sewer system, gutters, street lights, green space, and park space. It does not have typical small town amenities such as restaurants, banks, or gas stations. Residents must travel into the city for all of their needs, and until recently, a lack of public transit service to the community was a significant obstacle for residents accessing jobs, services, schools, doctors, and other daily necessities. West Park residents walked or biked over a mile to the nearest bus stop, or into town—a safety hazard on the unlit busy country roads near the community—or paid high prices for rides.

The West Park community knew there had to be a better way. So residents formed a community group called Los Olvidados (The Forgotten) to tackle the community’s most pressing needs. California law requires that local governments increase investment in communities such as West Park to close the opportunity gap for those residents, but residents know from experience that they face an uphill battle and must fight for their rights. It’s vitally important that county officials work hand-in-hand with residents to ensure these communities have the resources they need. Los Olvidados retained CRLA as counsel to provide community legal education, leadership development training, and legal representation to support resident leaders. 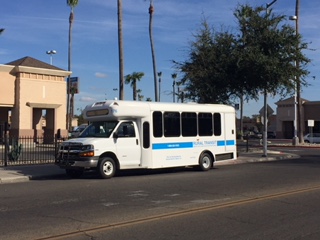 Los Olvidados achieved their first big victory in November: a public transit line serving the community. The route represents a milestone for the community and demonstrates the strength of community leadership. The transit project also represents an example of how local planning agencies can, and must, work directly with residents to provide access to critical services in a way that meets community needs.

Residents worked with Fresno County Rural Transit Agency (FCRTA) to design the route from scratch to best serve the needs of the community. It is community-driven processes such as these that are essential for creating thriving, robust communities.

On the day the bus line opened, people who have lived in West Park for years were able to take public transportation into Fresno for the first time ever.  According to resident David Sanchez, before the transit line “[the] community was doing whatever it could with what it had to get to the city of Fresno and back.”  Now, “[the transit line] is going to empower the residents of West Park and will allow us to be more independent!” explains resident Terri Hernandez.

To understand why West Park residents have had to fight so hard for basic services, it’s important to understand West Park’s relationship to the cities, towns, and local governments around it. West Park is what is known as a “disadvantaged, unincorporated community” (DUC). DUCs are “unincorporated” communities—meaning they are not part of a city—with a median household income of less than 80% of the California median. While each community has a unique history and character, many DUCs share two similar characteristics: they are primarily low-income communities of color with a significant number of people who qualify as “limited English proficient,” and they have experienced decades of disinvestment and exclusion from the land use processes that shape their communities. 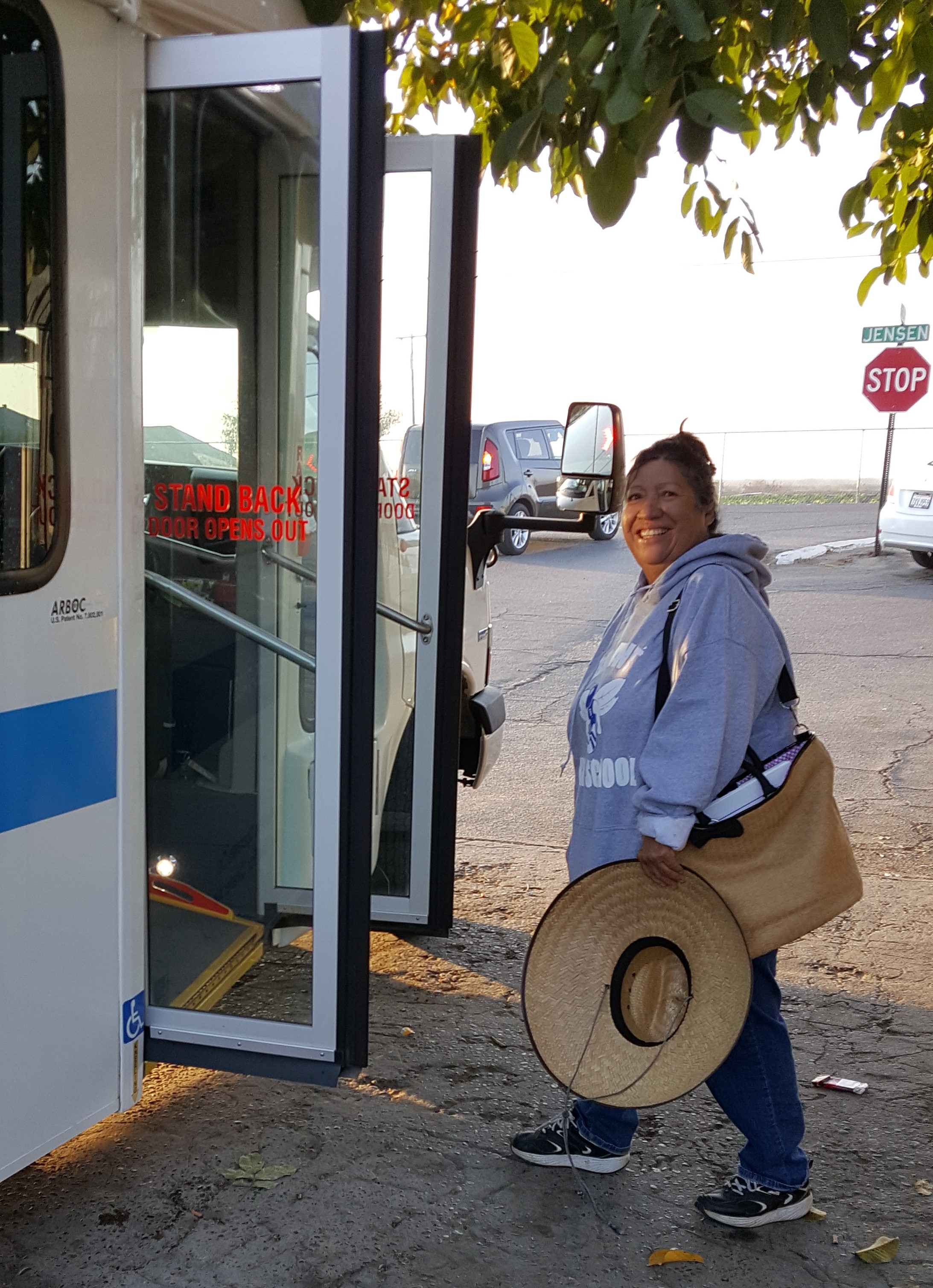 Like urban areas, rural areas are affirmatively shaped by land use decisions made at the local government level. These decisions determine what types of uses—such as industrial, agricultural, residential, commercial—are permitted in each area, as well as where investments flow for infrastructure and services like law enforcement and fire protection. Low-income and non-white communities frequently shoulder the burdens of development: industrial centers, packing houses, dairies, feed lots, rendering facilities and waste disposal sites are more likely to be sited near poorer, non-white communities while investments in parks, bike paths, transportation, street lights, commercial centers, and office space are more likely in affluent and whiter areas.

Decades of inequitable investment and land use policies ultimately led to the development of federal and state legal protections aimed at reversing these patterns. Yet despite the fact that local governments are legally required to invest in disadvantaged communities and improve disparities in access to resources, residents in DUCs often spend decades fighting for access to clean drinking water, sidewalks, street lights, and other basic infrastructure, while counties funnel resources elsewhere.

CRLA has a unique effort to work with DUCs – the Community Equity Initiative (CEI) – that combines innovative environmental justice efforts with unique legal strategies to make sure low-income communities aren’t left behind. CEI works alongside community leaders to raise awareness of DUCs, increase investment in community infrastructure, advocate for equitable development, guarantee fair representation, and build leadership capacity, so that residents can engage meaningfully in decision-making that impacts their neighborhoods and their families.

In the coming months, Los Olvidados will tackle additional goals. The group is hosting a community toy drive this December, is addressing code enforcement issues in their community, and is tracking local land use projects. Fresno County is also updating its General Plan and must prioritize equitable planning and include West Park in its plan to comply with state law on DUCs. The update is an opportunity for Fresno County to demonstrate its commitment to its legal obligations and to the residents of West Park. Los Olvidados and other local leaders will be involved in these processes to ensure that the West Park community and others like them receive the investments that they are entitled to and have been waiting on for too long.

Mariah Thompson is a staff attorney for California Rural Legal Assistance, Inc's Community Equity Initiative, addressing environmental and racial justice issues in rural San Joaquin Valley communities. She earned her J.D. from the University of Virginia School of Law in 2014.

Founded in 1966, California Rural Legal Assistance’s mission is to fight for justice and individual rights alongside the most exploited communities of our society. Through a network of regional offices and cross-cutting programs, CRLA provides legal services to over 50,000 low-income people annually. CRLA’s work impacts farmworkers, individuals with disabilities, immigrant populations, LGBT communities, women, children and families in rural areas. For more information on CRLA, please visit www.crla.org.