VICTORY! Clergy Can’t be Shut Out of Immigration Court Anymore 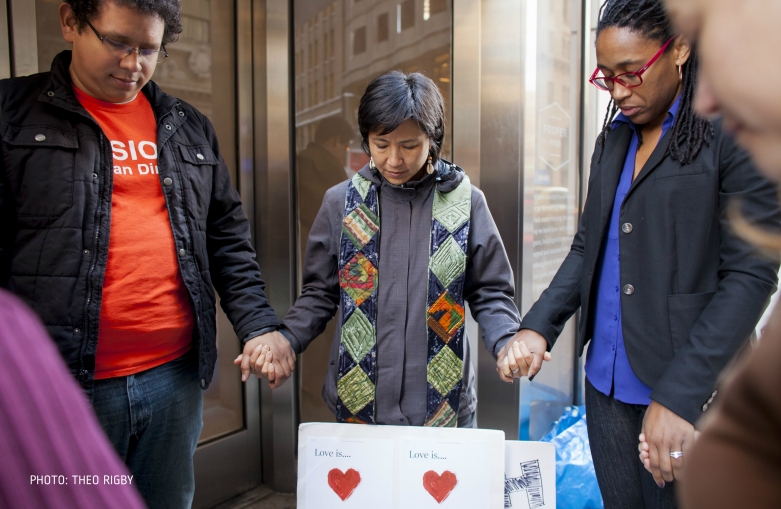 In times of crisis, many people rely on their religious leaders for support. Yet, until recently, private security and court bureaucrats refused to permit pastors to accompany children and families to their hearings at the San Francisco Immigration Court. Even more disturbing, the denial of access was in apparent retaliation for the pastors’ participation in a peaceful vigil outside the building.

In the fall of last year, the  Interfaith Coalition of Immigrant Rights began holding regular vigils outside of the San Francisco immigration court to silently protest and draw public attention to the government’s practice of shuffling thousands of families and unaccompanied minors through rapid-fire immigration court proceedings, with little regard for their legal rights or the danger they may face on return to their home countries.

As part of the vigils, clergy and other members also support families attending these hearings by handing out lists of pro bono service providers to families without attorneys and giving children stuffed animals and coloring books on their way into court.

Many children and families endured harrowing experiences of persecution and violence and relive the trauma through testimony at court - often with no one present to support them, not even a lawyer. On occasion, families request that the pastors accompany them to their hearings to provide spiritual and moral support.

Disturbingly, building security at the San Francisco Immigration Court forbade pastors who participated in the peaceful vigils from accompanying the families to their court hearings in what we saw as blatant retaliation, even though both activities are strongly protected by our country’s First Amendment.

Barring clergy from attending immigration hearings carries with it serious constitutional implications and takes an emotional toll on families fighting for their right to refuge in this country. In response to these events, the ACLU of Northern California sent a letter to the immigration court and building management urging them to comply with the law and permit pastors to accompany immigrant families to court. In response, the Court Administrator quickly agreed that the pastors should be allowed to enter the building and accompany families during their hearings.

We welcome their decision and will remain vigilant to ensure that building staff hold true to their word and that everyone’s constitutional rights are respected.

The First Amendment and federal regulation guarantees the public’s right to attend most immigration court hearings (with a few specific exceptions). If you believe this right is being violated, please contact us.

Megan Sallomi is a Legal Fellow at the ACLU of Northern California. Reverend Deborah Lee is the Director of the Interfaith Coalition of Immigrant Rights.