People of Color Are Disproportionately Affected by State’s Action 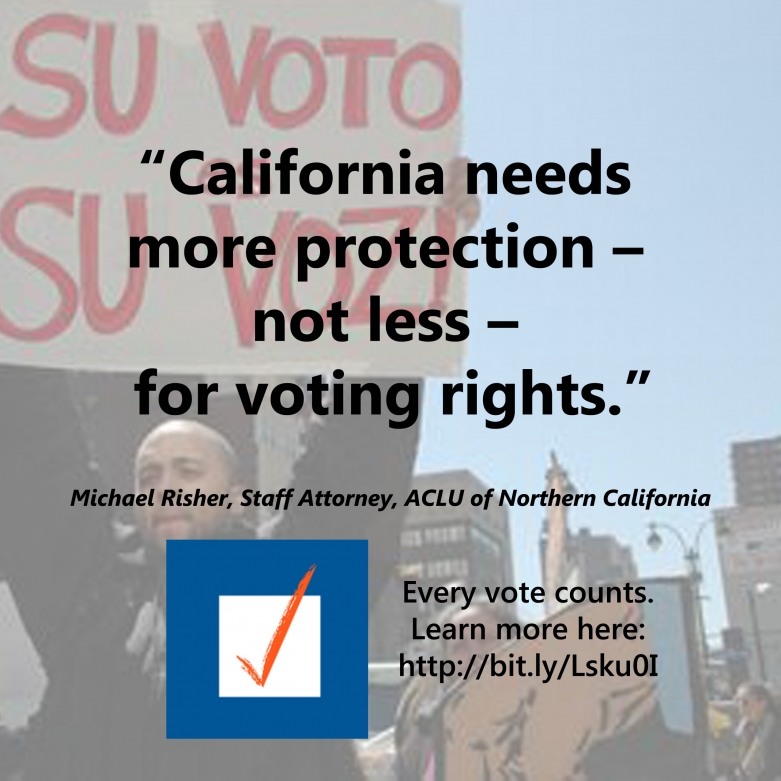 Oakland – The ACLU of California and the Lawyers’ Committee for Civil Rights of the San Francisco Bay Area (LCCR) today filed a lawsuit charging the state with unconstitutionally stripping tens of thousands of people of their right to vote.

According to the lawsuit, filed in Alameda County Superior Court, the state’s actions clearly violated state law when the secretary of state issued a directive to local elections officials in December 2011 asserting that people are ineligible to vote if they are on post-release community supervision or mandatory supervision. These are two new and innovative forms of community-based supervision created under California’s Criminal Justice Realignment Act for people recently incarcerated for low-level, non-violent, non-serious crimes.

The Secretary of State should be working to increase voter participation, not to undermine it,” said Michael Risher, staff attorney with the ACLU of Northern California. “California has dismal rates of voter registration and participation. The Secretary of State is making this even worse by disenfranchising tens of thousands of California citizens who are trying to re-engage with their communities. With voting rights under attack across the nation, and the U.S. Supreme Court’s disappointing decision striking down a critical law that protected the right to vote for people of color and language minorities, California needs more protection – not less – for voting rights.”

The lawsuit was filed on behalf of three people who have or will soon lose their right to vote, along with the League of Women Voters of California and All of Us Or None, a nonprofit organization that advocates for the rights of formerly and currently incarcerated people and their families.

The law clearly establishes a presumption in favor of the right to vote, with only limited and specific exceptions,” said Meredith Desautels, staff attorney with the Lawyers’ Committee for Civil Rights of the San Francisco Bay Area. “The Secretary of State unilaterally expanded these exceptions, without any public comment or input, disenfranchising thousands of members of our community and creating confusion around the voting rights of formerly incarcerated people. This unconstitutional disenfranchisement particularly impacts communities of color, who are too often excluded from the democratic process.”

Society is much more secure when all people feel they are fully part of it,” said Dorsey Nunn, executive director of All of Us Or None, one of the plaintiff organizations. “If we want formerly incarcerated Californians to be good citizens, we need to convince them that they are a part of society too. I have never met a graffiti artist who spray paints his own home or business.”

After California voters in 1974 approved Proposition 10, state law has been clear that the only people ineligible to vote in California are those who are in state prison or on parole.

Voting should be part of a successful reintegration into one’s community, but the Secretary of State’s memo takes us in the wrong direction,” said Jennifer A. Waggoner, President, League of Women Voters of California, another organizational plaintiff. “People of color are being disenfranchised and thousands of voters and county officials are being confused about their voting rights. The strength of our democracy comes from allowing everyone to fulfill their civic responsibility to vote.” The League has been fighting for expanded voting rights for all since 1920, when it was founded by the activists who secured the right to vote for women.

A copy of the complaint is available here.