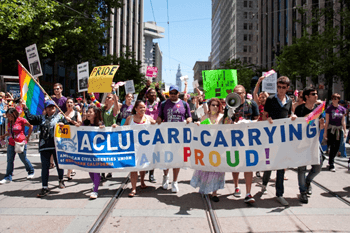 The ACLU of Northern California has been named the Community Organization Grand Marshal for San Francisco Pride 2012. The ACLU has a decades-long history advocating equality for LGBT people. It brought its first LGBT rights suit in 1936 and over many decades helped what became a strong movement for LGBT equality. Today, the ACLU remains in the thick of the battle, fighting for the recognition of same-sex married couples, respect for gender identity and expression, and respect for LGBT students.

Among the historical highlights:

Today the ACLU brings more LGBT cases and advocacy initiatives than any other national organization. Recent victories include:

During June 2012 Pride Month, the ACLU will participate in a number of Pride-related activities and has expert spokespeople available on LGBT history as well as current lawsuits and campaigns.

The ACLU is sponsoring two films in the Frameline LGBT Film Festival:

The ACLU will be blogging and Tweeting throughout Pride month. Follow @ACLU_NorCal to stay updated.

Additionally, ACLU supporters are encouraged to march with the organization’s contingent in the Pride Parade on Sunday, June 24. Breakfast, coffee and an exclusive ACLU Pride 2012 t-shirt will be provided. RSVP online.

March with ACLU in the SF Pride Parade, 6/24