Bullies In Blue: Origins and Consequences of School Policing 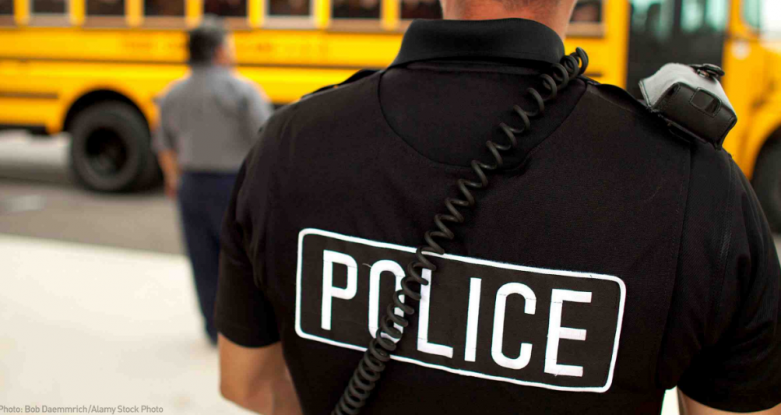 Like many teenage boys, Nathan and Caleb, 14- and 16-year-old brothers who were students at Clarkston High School in rural Washington, liked to play pranks. At least they did until an incident at school landed both boys with felony charges.

One morning the boys were in the same class with a substitute teacher watching a movie when they remembered the small bottles of fart spray they had with them. They unleashed the spray, causing students to complain with disgust and then spray their own cologne and perfume to mask the smell.

Later that day, Nathan was caught with the spray. When Caleb found out, he didn’t think it would be fair for his brother to get all of the blame, so he confessed that he had been involved in the prank, too. The boys were issued suspensions and told that their prank had caused a girl to have an asthma attack.

But when Nathan and Caleb returned to class after suspension, they were brought in for questioning by the police officer stationed at their school. A few weeks later, a letter from the prosecutor arrived in the mail. The boys were being charged with felony assault and disturbing the school — a charge similar to disorderly conduct that can be applied to students acting inappropriately in schools.

The family was shocked. How could a simple prank result in a felony assault charge that the boys might have to carry for the rest of their lives? The boys were scared. Would they be put in a detention center? How would it affect their schooling? When they came of age, would they even be allowed to vote? Eventually the charges were reduced, but not without first humiliating the boys and leaving the entire family traumatized. “It’s sad to think you could go to school one day with fart spray and come home a felon,” said their father, Robert. “And for their entire life, this system would want a kid to pay for that.”

This story may seem outrageous, but it is not uncommon. Every day in our nation’s schools, children as young as five are charged with “crimes” for everyday misbehavior: throwing a paper airplane, kicking a trashcan, and wearing sagging pants. In the 2013-14 school year, the most recent year for which statistics are available, schools reported over 223,000 referrals to law enforcement.

A 13-year-old Texas boy who attempted to pay for school lunch with a $2 bill that turned out to be fake faced prison time on charges of felony forgery. In Virginia, a middle school student was charged with assault and battery with a weapon for throwing a baby carrot at her teacher. The criminalization of typical youth behavior has engendered a bizarre reality — students are arrested in schools, places meant to provide safe haven, for behavior that is noncriminal in any other venue.

The ACLU’s newly released white paper, “Bullies in Blue: Origins and Consequences of School Policing,” examines the origins of school policing, which has been driven by the same punitive criminal justice policies and assumptions that drove the overcriminalization of Black and Latino communities and spawned an era of mass incarceration. Tracing school policing back to civil rights struggles to end Jim Crow segregation, the report challenges assumptions that the function of police in schools is to protect children.

By the 1970s, police regularly patrolled newly integrating or majority Black and Latino schools in 40 states, looking for behaviors deemed disruptive under the justification that it would prevent the outbreak of larger crime. In fact, when “broken windows” theory was popularized in 1982, its architects pointed to “rowdy youth” as a critical target of the strategy, further justifying the presence of police in schools even as youth crime went down.

At its inception, the concept of preventative policing in schools targeted relatively few schools. Heinous school shootings in the late 1990s, coupled with a growing, but misplaced fear in a coming juvenile crime wave of “superpredators”, led to an expansion of school policing. This expansion was fueled by an outpouring of federal funds and enshrined in federal criminal justice and education policy. Still, school policing continued to be concentrated in low-income neighborhoods of color, although the worst of crimes — these school shootings — occurred in majority-white suburban schools.

Given that school policing originated and is concentrated in Black neighborhoods, it should be no surprise that school arrests disproportionately affect students of color. Nationally, Black students are more than twice as likely as their white classmates to be referred to law enforcement. And as “Bullies in Blue” shows, in South Carolina, Black students are almost four times as likely as their white counterparts to be charged with “disturbing schools” — an unconstitutionally vague and broadly worded law that allows police to arrest students for any behavior deemed “disruptive” or “obnoxious.”

Click on the map below to see the details for each grant location.

Our report dispels mythology that has kept school police in place. Advocates for school policing, such as the National Association of School Resource Officers, describe the role of school police as that of disciplinarian, mentor, and teacher. “Bullies in Blue” argues that those roles should not be the role of police officers who have neither the training nor direct mandate to act as mental health specialists or trauma counselors. Trained professionals and educators whose responsibility is foremost to the students and the school should fill these roles.

The white paper identifies the significant risks to students’ rights when police are placed in schools. Law enforcement officers in schools often become involved in noncriminal matters, jeopardizing students’ rights to be free of unwarranted “search and seizure” in violation of the Fourth Amendment. Young people’s privacy rights are further undermined when police in schools surveil students, access student education records, and share this information with outside law enforcement.

School referrals to law enforcement and arrests also disparately affect students of color and students with disabilities. School policing must be assessed for its contributions to these disparate contacts with the justice system and for infringement of students’ rights to be free from discrimination on the basis of race and disability.

“The often toxic relationship between law enforcement and communities of color frequently begins in the schools,” said Dennis Parker, director of the ACLU’s Racial Justice Program. “The atmosphere of fear and mistrust experienced by many people of color on the streets as a result of abusive and unwarranted stops and arrests has even greater consequences when it occurs in schools, which are supposed to be safe spaces conducive to learning, not places to prepare young people for a place in the criminal justice system and correctional institutions.”

The fact is the use of police in schools oftentimes results in physical harm to children. “Bullies in Blue” reviews incidents where children have been body slammed, tased, pepper sprayed, choked, and placed in handcuffs. In one incident, a four-year-old was shackled in his pre-kindergarten class for throwing a temper tantrum. In another, a 16-year-old boy was arrested and struck 18 times with a metal nightstick — half of which occurred after the student had already fallen to the ground in pain.

New data from the New York Civil Liberties Union demonstrates that students are handcuffed regularly for incidents considered noncriminal even by school standards. Police are using handcuffs to “de-escalate” mental health crises or to interview students who have not done anything criminally wrong.

“As with other aspects of the school to prison pipeline, students of color are far more likely to be subjected to use of force and handcuffing,” said NYCLU Advocacy Director Johanna Miller. “In incidents involving Black or Latino students, police used handcuffs 34 percent of the time versus 26 percent of the time for white students.” When children have been injured — a wrist broken, a jaw broken — law enforcement has been quick to justify their actions as legitimate, blaming students for the need to exercise force and even lying to hide their actions.

The Expansion of School Policing Through Federal COPS Grants,
1995 - 2016

The psychological impact of school policing on children has lifelong consequences. When schools respond to children, even teenagers, by engaging law enforcement for minor discipline issues, children experience alienation, anxiety, and rejection. They then associate schools and the adults within those institutions with potential harm.

Importantly, school policing also impacts how children understand and interpret notions of justice and fairness. The notion of procedural justice is critical here. If students have contact with law enforcement for minor and noncriminal reasons, they lose faith that the system of law enforcement is one that is fair. This can lead to further misbehavior and undermines student engagement.

Tim Kornegay, a formerly incarcerated activist whose first encounter with the police was in 1968 at the tender age of six, said of the police in schools, “They were there to label you as a criminal and to remind you that no matter where you were, you were always subject to police contact.” 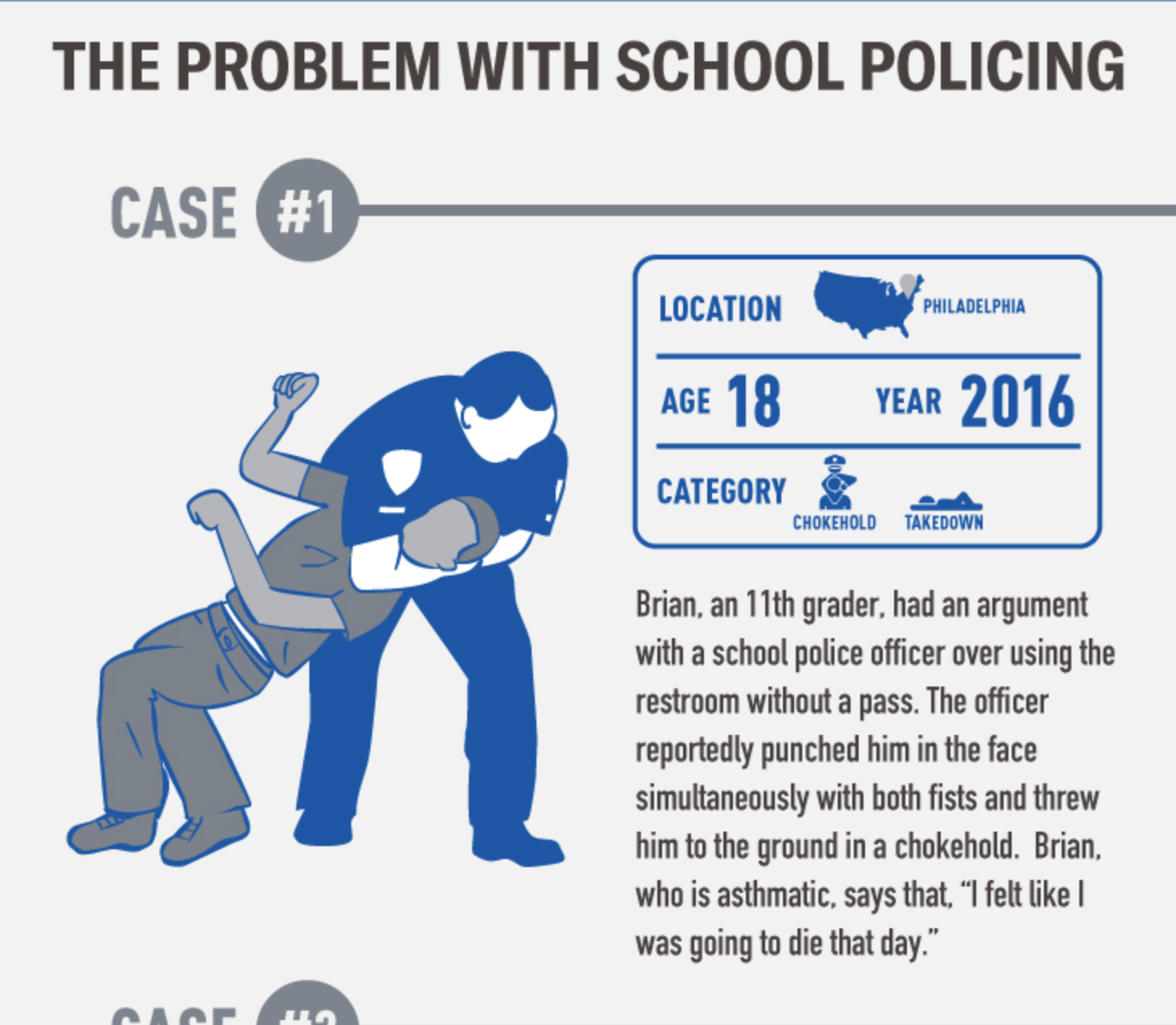 Students carry the mark of an arrest with peers and teachers, who see them now as troublemakers, and school police officers, who may interfere with them more regularly. Arrests can also have consequences for student achievement and life attainment. A student who is arrested in the course of schooling is twice as likely to drop out of school. If it results in a court case, their chance of dropping out skyrockets to 400 percent. For those students who do drop out of high school as a result of an arrest, the chances that they will serve time in prison increases exponentially.

Police in schools do not make schools safer; caring and trained adults do. The “Bullies in Blue” report shows that there is no routine place for police in our public schools. Students with the greatest need for positive and quality education end up being those most punished in our schools.

If schools are to be positive learning environments for all students, places that nurture and protect the rights and capacities of all students, we must recognize how school policing and the criminalization of youth of color denies students access to an equitable future.

“Bullies in Blue” is designed to equip advocates and activists with the real hard facts behind school policing — where it came from, how it’s justified, and what its impact is on children. We hope that advocates will join the ACLU in calling for counselors, not cops, in schools.