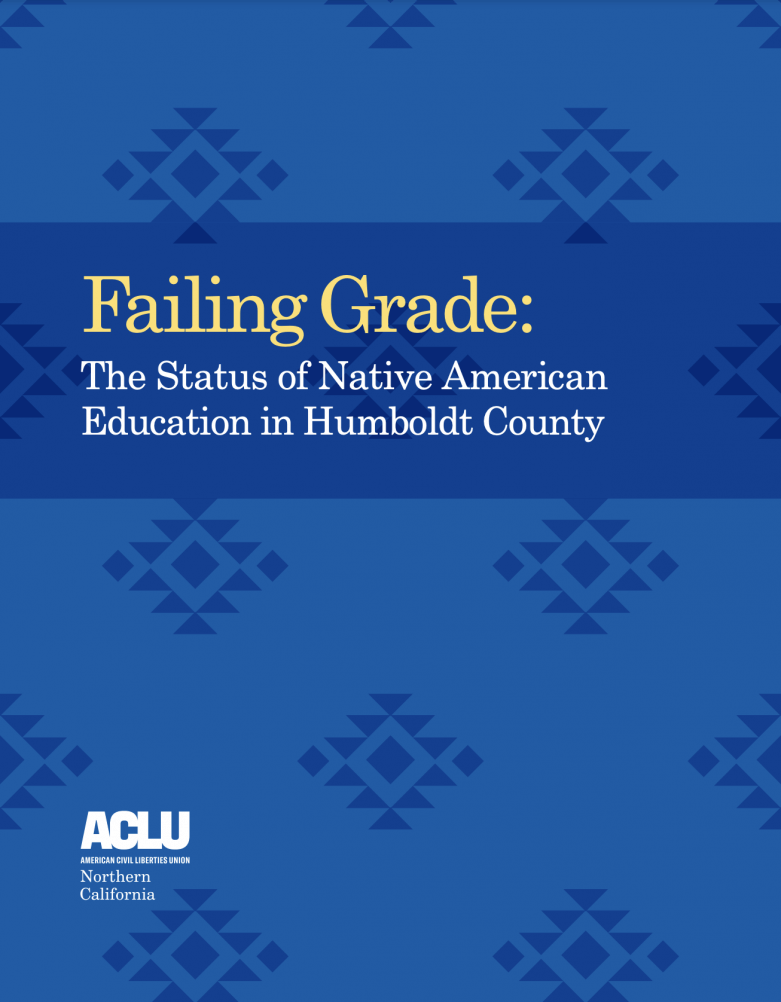 Since time immemorial, tribes have passed down their cultures, languages and traditions through Indigenous ways of learning and knowing; holistic learning through direct engagement with rivers, forests, and the natural world, through oral histories, with the participation of entire tribal communities. Education has always been key to Indigenous ways of life. But with the first contact between Indigenous and non-Indigenous peoples, public education became a tool of oppression.

Today, Native American students across the country and throughout California continue to face disproportionately higher rates of exclusionary discipline, chronic absenteeism, and lower academic outcomes than their nonIndigenous peers. In Humboldt County, home to nearly twenty times more Indigenous students than the statewide average, these disparities are egregious.

But with the first contact between Indigenous and non-Indigenous peoples, public education became a tool of oppression. Today, Native American students across the country and throughout California continue to face disproportionately higher rates of exclusionary discipline, chronic absenteeism, and lower academic outcomes than their nonIndigenous peers. In Humboldt County, home to nearly twenty times more Indigenous students than the statewide average, these disparities are egregious.

These data reflect a system that poorly equips Native American students with the skills and tools they need to succeed in primary or secondary education as well as in college and the workforce. This has lasting ripple effects, including overrepresentation in the criminal justice system, disparities in life-long health outcomes, and limited access to economic opportunities. Appallingly high numbers of Indigenous students are leaving the public school system unprepared for professional careers or to serve in formal leadership and decision-making roles within their communities.

Schools Do Not Foster School Climates Where Indigenous Students Can Thrive

All students in Humboldt County, including Indigenous students, are deprived of the care and attention of critical school-based health professionals. The need for these supports is especially acute in Humboldt County, where higher than average numbers of people report significant life trauma. While there are community-based organizations and grassroots movements working, against the current, to transform systems of care and provide culturally based, locally driven services, the vast majority of students in Humboldt County attend schools where health professional staff are sorely lacking.

This data is especially alarming given the current COVID-19 health crisis when students need consistent physical and mental health care more than ever.

Public Education of Indigenous Youth Has Been A Tool of Colonization

The public education system was never intended to benefit Native American students or tribal communities. Beginning in the 19th century and lasting for generations, hundreds of thousands of Native American children were forcibly abducted from their families, communities and tribes by government agents and sent to boarding schools, often hundreds of miles away from home. Education was used as a weapon of cultural genocide and forced assimilation. Children faced severe physical and emotional abuse if they were caught speaking their native tongue in the classroom. They were forced to abandon their tribal customs, traditions, and languages; in short, to give up everything that made them Indigenous. As a result of the Boarding School Era and countless other oppressive governmental policies and practices intended to erase Indigenous peoples, history, identity, and culture, Indigenous children and communities share a legacy of historical and intergenerational trauma. Today, some students are only two generations removed from the traumatic boarding school experience, with grandparents and other extended family who were abused and degraded in these schools.

In accessing an equitable education, one that prepares students for college and career, Indigenous students have unique educational needs and continue to face a number of overwhelming systemic barriers that can lead to student alienation and disengagement from school, including:

Native American students in Humboldt County are thus more likely to experience worse life outcomes because they are not receiving the support and resources they need to thrive in school. These data are a call to action for parents, educators and leaders across Humboldt County to find solutions and resources to address the crisis of under-education, de facto exclusion, and failure to provide a meaningful foundation for Indigenous students to achieve their true potential.