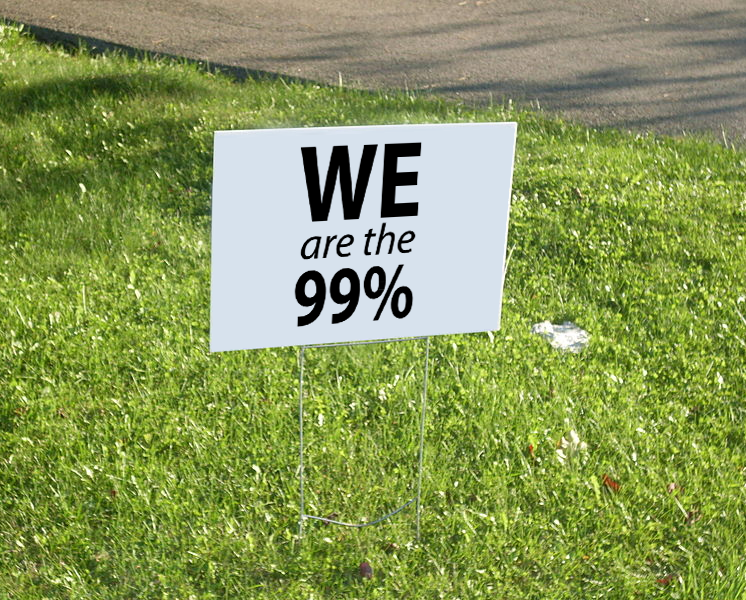 The ACLU-NC filed suit against the City of Milpitas today over its overly-restrictive and vague sign ordinance that is curtailing free speech in the city.

Milpitas resident Rob Means put up a 26" x 16" lawn sign in his front yard that said "We are the 99%" to make a statement about economic inequality and to show support for the Occupy movement. Not long after that, the city sent him an abatement notice: he could either take the sign down, put up a smaller sign that wouldn't be readable from the street, or pay $700 to apply for an exception to a local ordinance concerning the size and placement of lawn signs.

Don Bloomer, another Milpitas resident who lives down the street from Rob, saw the sign and walked over to Rob's house (whom he did not know) to express his support. Rob offered him another "We are the 99%" sign. Don put it up on his front lawn, and received a similar notice from the city to take down the sign, replace it with a much smaller one or pay up. He took down the sign.

Clearly, this ordinance is having a chilling effect on residents' First Amendment rights. If you had to pay a hefty fee to communicate with your neighbors, would you?

The ordinance differentiates between signs for political candidates (which the ordinance calls "temporary" signs, which are allowed as long they are down within 15 days after an election) and "permanent" signs, which include all political signs not involving an election. Under the ordinance "permanent" signs must be no larger than one foot by one foot. The ordinance's limitation on "permanent" expressive lawn signs is an overly broad restriction - and it's keeping Milpitas residents from exercising their right to freedom of expression in a fundamental way.

The ACLU-NC asked the City of Milpitas to change the ordinance so that it wouldn't limit speech, and to suspend enforcement of the ordinance until then. After no meaningful action from the City, the ACLU-NC sued.

Freedom of speech and expression is an essential right, and the lifeblood of our democracy. Whether Robert Means wants to express his support for the Occupy movement through attending a rally, writing a blog post, or posting a sign on his own property he - and every other person in this country - has the right to do so.