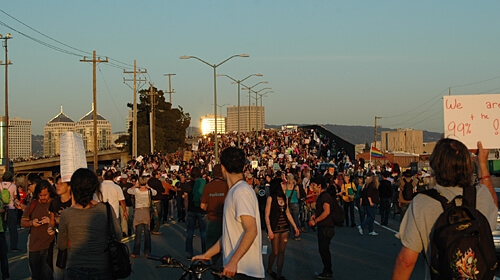 Today Oakland released a report it commissioned from the Frazier Group that reviewed police tactics in response to Occupy Oakland demonstrations. (The ACLU of Northern California widely criticized OPD for excessive force and violence against protesters, and along with the National Lawyers Guild, sued OPD. That lawsuit is ongoing.) The report is widely critical of the Oakland Police Department's tactics. It notes that the department failed to meet standards on crowd control and dealing with the shooting of Scott Olsen, an Iraq veteran who was severely injured during the Oct 25 protest when he was shot by police.

Ultimately, the report concludes that OPD is in terrible shape and needs serious reform, including in training, leadership and implementation.

For better or for worse, the report released today was designed was to look only a big picture systemic issues on Oct 25. It says that its purpose was not to assign blame, and didn't target individual officers and actions. That still needs to happen. The report punts on key issues including whether the use of munitions on Oct. 25 was even justified.

OPD's process of making the necessary changes should be transparent and should include all relevant stakeholders, including the ACLU and the general public.

The City of Oakland says that 74% of the recommendations are currently completed or underway. However, Oakland does not have a great history of implementing reforms, considering that it has been 9 years since the current Crowd Control Policy came out of a court settlement, and it's not being properly followed. So we are skeptical that OPD is meaningfully implementing these recommended reforms.