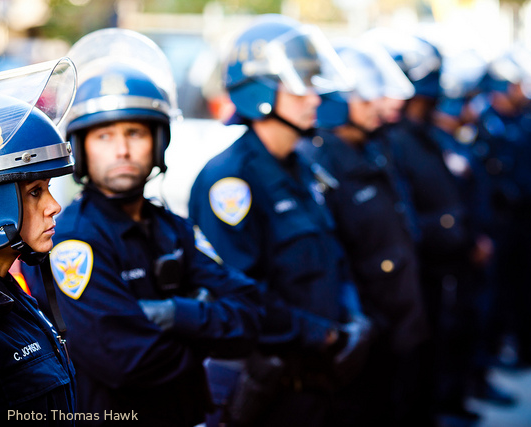 The failure of the grand juries in Ferguson, Missouri and New York City to bring any criminal charges against the police officers involved in the shooting deaths of Michael Brown and Eric Garner understandably led to widespread protests around the country.

These deaths were just two examples of an epidemic of young African-American men shot and killed by police officers. The failure of the criminal justice system to respond in any meaningful way to these police-involved shootings led to protests in the streets marked by rage and despair. Some of the most vigorous and sustained protests took place in Oakland and Berkeley.

While some law enforcement response was called for, there were disturbing signs of a familiar pattern – the use of excessive force against demonstrators, particularly the use of dangerous less-lethal weapons such as beanbag projectiles and “flash” bang grenades.

In 2003, after these less-lethal weapons were first used against political demonstrators, the ACLU and the Bay Area Chapter of the National Lawyers Guild (NLG) sued Oakland, which led to a landmark Crowd Control Policy that prohibited the use of the most dangerous of these weapons for crowd control purposes. However, during the Occupy demonstrations in 2011, a protestor was shot in the head by an Oakland police officer firing a beanbag projectile into the crowd, resulting in permanent brain damage and a court award of $4.5 million in damages.

While the Occupy protests showed that Oakland still has problems enforcing the Crowd Control policy, the recent protests strongly suggest that the California Highway Patrol (CHP) and Berkeley are operating without such policy restraints. In response to the protestors’ nonviolent takeover of freeways, the CHP were very quick and aggressive in their use of force, aiming projectiles at the chest and heads of demonstrators, and firing at protestors who were not on the freeways or disrupting traffic.

Also, an undercover CHP officer who was embedded in the crowd brandished a gun at protestors and journalists after his presence became known to the crowd. The Berkeley Police were also very aggressive about using less lethal weapons, including baton strikes against demonstrators, resulting in some serious injuries.

Show us your records

The ACLU and the NLG want to determine whether the police tactics used in response to these demonstrations were lawful and constitutional, and whether the policies of the agencies regarding the use of force against demonstrators reflect constitutional limits and best practices. The public has its own statutory right to have access to these records, as the need for government transparency is at its height when police actions result in injuries to protestors.

Accordingly, we have filed Public Records Act requests with the CHP, the Berkeley Police Department, and the Oakland Police Department, seeking both their relevant policies and training materials as well as individual arrest and use of force records to help us determine if further action is necessary.

Alan Schlosser is the legal director of the ACLU of Northern California.