After a Decade's Fight for Net Neutrality, Major Win for Internet Free Speech 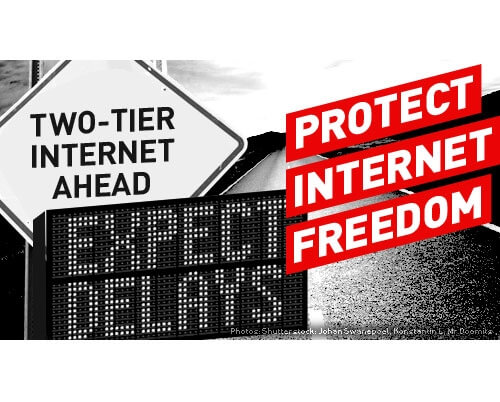 The people have spoken. And, today, the Federal Communications Commission listened. A majority of FCC commissioners voted in favor of historically strong open Internet rules.

It appears they have done what the ACLU and other free speech groups have been suggesting for years: put net neutrality rules on firm legal footing to prevent large internet companies from using their market power to extract money from content companies that rely on their networks to reach Internet users.

But some in Congress are looking to roll back these protections. Tell them you won't stand for it.

These are key protections for free speech online.

As the Internet has grown from dial-up to broadband, the underlying telecommunications providers have become the "gatekeepers" between content providers like Google or Netflix and their consumers. Further, because few companies have the infrastructure to carry the vast amount of data we consume every day, there's not that much competition for high speed broadband. That gives these gatekeepers an enormous amount of economic power over the content and service side of the internet.

To check that power in the public interest, the FCC will "reclassify" Internet service under Title II of the Communications Act, which applies to things like landline telephone and wireless voice services. Doing so will very likely mean that the new rule will be sufficient to ensure that Internet service providers can't slow down lawful services, charge big companies extra to reach consumers faster on a digital fast lane, or block services that are either controversial or compete with the ISP.

Today's proposal will apply only those regulations that are absolutely necessary to address the problem, while still providing ample space in the market for broadband providers to invest in new capacity and to promote broadband adoption. That said, it's worth noting that there is at least one new rule we'll need to look at carefully. As our friends over at EFF explain, the proposal includes an "open internet conduct standard," which sounds quite vague and could result in undue regulation of the Internet in the future.

Also, despite today's good news, there's more work to be done. Some companies and trade groups are likely to challenge the rule in court, and Congress is also threatening to gum up the works. Legislation is pending that would gut the new rule, and one senator has gone so far as to call the regulations "Obamacare for the internet."

The FCC did something very rare in Washington this week. It did the right thing by listening to the millions of Americans – including tens of thousands of ACLU supporters – that demanded a free and open internet. And it also made an awfully shrewd political move. Although the large broadband providers have pilloried the commissioners who voted for the rule today, a vastly more powerful constituency, the American public, is foursquare behind the commission.

There's a great line in the movie Serenity: "If you can't do something smart, do something right." The FCC did both today.