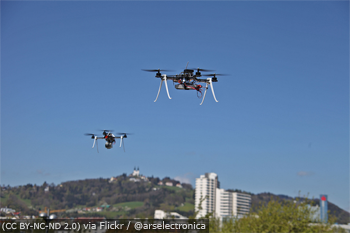 Buried on the Board of Supervisor's 66-item agenda for its December 4, 2012 hearing was a surprising request by the Alameda County Sheriff's Office for approval to "apply for, accept and administer" funds from the California Emergency Management Agency (Cal-EMA) to buy a drone.

This was very troubling for a number of reasons.

The Sheriff to date has not been forthcoming about his intentions and actions in acquiring a drone. The sheriff has told the public and the board that he intends to use the drone for search and rescue. Documents recently obtained by the ACLU of Northern California, however, confirm that he actually intends to use the drone for surveillance. Drones are capable of stockpiling detailed, personal information and are subject to tremendous abuse. Before any drone acquisition proceeds, we need to ask whether drones are really necessary in our community and have a transparent and democratic process for debating that question. If the decision is ultimately made to acquire a drone, we need to have rigid safeguards and accountability mechanisms in place, so that law enforcement does not use drones for warrantless, mass surveillance.

The Sheriff has also told the public that his office is only in the preliminary stages of potentially acquiring a drone. Documents we obtained show this also to be false. Additionally, by burying this important issue on the Board's agenda, the sheriff is attempting to bypass full scrutiny and review by the public and Board of Supervisors. Before we rush to acquire a drone, the county's civilian elected leaders should engage in a thoughtful and transparent debate, with ample opportunity for public participation.

Records recently obtained by the ACLU of Northern California through a Public Records Act request to Alameda County Sheriff Gregory J. Ahern undermine public statements by sheriff's office officials that drones would be used for search and rescue and other purposes unrelated to surveillance, and that the drone acquisition process was merely in a preliminary stage:

As soon as we learned of the Sheriff's effort to obtain summary approval for its drone request from the Board of Supervisors, we sent a letter to the Board demanding that it withhold approval. The sheriff's effort to slip in his request for approval of the drone on the Board's agenda was particularly troubling not only because it skips the basic question whether the county should buy a drone at all (many residents say no), but also because there are no written safeguards yet in place for how the drone would be used. The Sheriff in his submission to the board promised to abide by the constitution and all applicable laws – in other words, to trust him to do the right thing. But if he has not even been candid that he intends to use the drone for surveillance, can he be trusted to use a drone in a way that respects our privacy rights?

A few hours after we sent our letter to the Board of Supervisors, we received a call from the county counsel's office saying that the sheriff would voluntarily withdraw the request for drone approval from the board's agenda. While that is good news – sort of – it shows that the sheriff, by putting the matter on the agenda to begin with, has not been taking concerns about drones seriously. It's time to bring the drone debate where it belongs – into full public view.