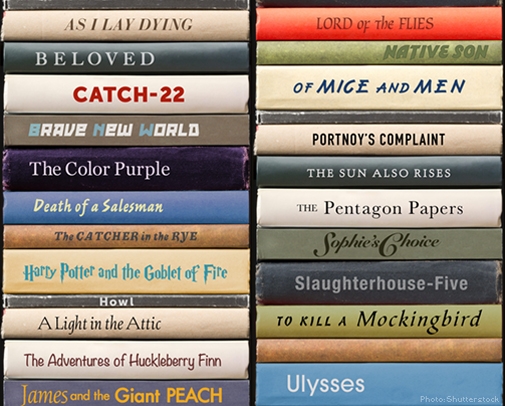 This week is the 32nd annual Banned Books Week, the celebration of the freedom to read. All week, ACLU-NC staff members will be blogging about the impact that banned books have had on their lives.

To kick off the week, here’s an overview of the dangers of censorship and some of the books that have been banned in this country. Think censorship is a thing of the past? Read on.

Since its founding in 1920, the ACLU has opposed censorship in all its forms. From books and radio to film, television, and the Internet, we have consistently fought to make sure Americans have the right to say, think, read, and write whatever they want, without fear of government reprisal. In 1926, we defended H.L. Mencken when he was charged with distributing copies of his banned magazine, American Mercury. In 1952, we won Joseph Burstyn, Inc. v. Wilson (aka the "Miracle Decision"), in which the Supreme Court finally struck down film censorship laws. In 1978, we filed a Supreme Court friend-of-the-court brief challenging the government's power to suppress radio broadcasts of George Carlin's "Seven Words You Can't Say On Television." And in 1997, we won Reno v. ACLU, which held that Internet speech is entitled to full First Amendment protection. And those are just a few of my personal favorites: more of the ACLU's most notable "Banned Book" cases are listed below – and some are from the not-so-distant past.

We are proud of this legacy, but we're not resting on our laurels. In the last five years, we joined in the Supreme Court challenge against the Federal Communications Commission's "fleeting expletive" rule. We successfully challenged the government's ideological exclusion of Professors Tariq Ramadan and Adam Habib from the country's borders. We launched a campaign to prevent public schools throughout the country from filtering LGBT web content.  And we continue to challenge the government's use of its surveillance powers in ways that chill individual expression. (See here and here). We remain passionately committed to the First Amendment values that keep our society open. And we will continue to oppose censorship wherever it rears its ugly head.

The Vietnam Reader, various authors
After a parent complained about passages from "The Vietnam Reader" that included violence and were sexually explicit, a committee in the North Kitsap School District in Washington deleted four readings without opening the discussion to members of the community. ACLU advocacy resulted in the creation of a policy to provide a fairer process for considering book challenges.

Sophie's Choice, William Styron
The Norwalk-La Mirada High School District in California removed "Sophie's Choice" from the La Mirada High School library shelves after a parent complained about sections of the acclaimed novel. When students expressed concerns that their First Amendment rights were being violated, the ACLU wrote a letter to the school district asking that the book be returned to the school library shelves. The book has since been returned.

Harry Potter series, J.K. Rowling
A Zeeland, Mich., school district banned students in grades K-4 from taking the "Harry Potter" books out of the school library and required students in grades 5-8 to obtain parental permission before borrowing them. The policy also forbade teachers from reading the books out loud during classes. After the ACLU sent letters to the public schools, the district formed a committee to review the issue and rescinded the policy.

As I Lay Dying, William Faulkner
Faulkner's classic was banned in a Mayfield, Ky., school district because it was deemed offensive and obscene. After intense pressure from the ACLU, the school district reversed its decision.

Howl and Other Poems, Allen Ginsberg
Poet Lawrence Ferlinghetti contacted the ACLU to defend the publication of "Howl." U.S. Customs officials had seized the books, stating, "You wouldn't want your children to come across it." A state court judge ruled that the poem could not be suppressed as obscene by local authorities.

The Grapes of Wrath, John Steinbeck
Along with several other groups, the ACLU protested the Kern County, Calif., Board of Supervisors' resolution banning "The Grapes of Wrath." The board argued that the book "offended our citizenry." Kern County is in the center of the agricultural region featured in the novel.

Ulysses, James Joyce
In one of the organization's most famous cases, the ACLU defended Joyce's "Ulysses" after U.S. Customs officials seized copies of the novel, calling it obscenity "of the rottenest and vilest character." After a decade-long struggle, it was ruled that "Ulysses" was not obscene.