California Values Act: It’s About More than Dollars and Cents 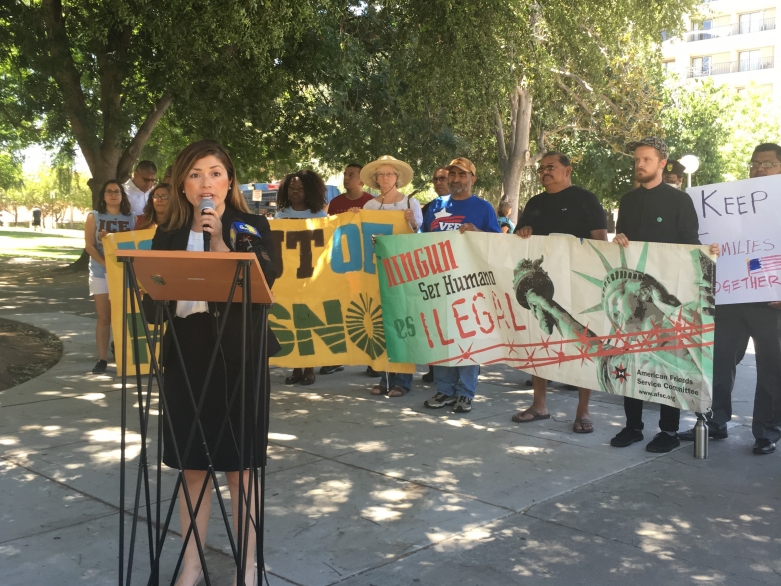 3/23 Update: Council Member Steve Brandau’s resolution for the City of Fresno to oppose the California Values Act was pulled from the city council agenda and will no longer be voted on.

While our immigrant communities are living in fear, wondering if immigration agents will come knocking on their doors or if a simple traffic stop might lead to their deportation, Fresno City Council Member Steve Brandau wants Fresno to turn its back on them and our state values of inclusion and human dignity.

Make no mistake, any policy targeting immigrants – or turning its back on immigrants – will undoubtedly have swift and significant negative impacts on our communities, neighborhoods, classrooms, and economy.

That is one of the many reasons why the Fresno City Council should stand on the right side of history, and say “No” to Council Member Brandau’s resolution against SB 54, the California Values Act.

The bill was introduced in Sacramento to protect the safety and wellbeing of all Californians by ensuring that state and local resources are not used to fuel mass deportations, separate families, or terrorize our communities.

The federal government wants to use local law enforcement as “force multipliers” of immigration agents, relying heavily on police to carry out mass deportations. We’ve been down this road before and we know how badly this will end.

From 2009-2015, Immigration and Customs Enforcement’s (ICE) controversial and failed S-Comm program had local law enforcement detain and transfer people to ICE.  This program operated in California as an indiscriminate mass deportation program that cost the state’s taxpayers $65M annually.  California law enforcement were responsible for 30% of all deportations nationwide under this program.  President Trump has now reactivated S-Comm. Nearly half of the people deported under the program had no criminal history whatsoever.

We also know that aggressive federal immigration enforcement strategies are continuing to increase with the new administration. ICE arrests in courthouses and outside schools are an alarming new trend that California state and local governments should take absolutely no part in.

What we need is to disentangle California from the business of mass deportations and ensure that immigrants are able to continue working, providing for their families, and raising their children.

The California Values act would do this by ensuring state and local law enforcement agencies and school police do not engage in immigration enforcement. The bill would also make sure that no state or local resources will be used to investigate, detain, report, assist, or arrest persons for immigration enforcement purposes, and that no police officer can be deputized as a federal immigration agent.

Sadly, Council Member Brandau wants Fresno to pass a resolution against the bill. We must recognize Brandau’s thinly veiled excuse that the bill would result in loss of federal funding dollars for what it is: an excuse to give the Trump administration a free pass to terrorize our immigrant communities.

We know that Brandau is basing his argument on a threat that Trump has no legal authority to actually carry out. The City Council shouldn’t fall for this misrepresentation.

Angélica Salceda is a staff attorney in the ACLU of Northern California's Fresno office.