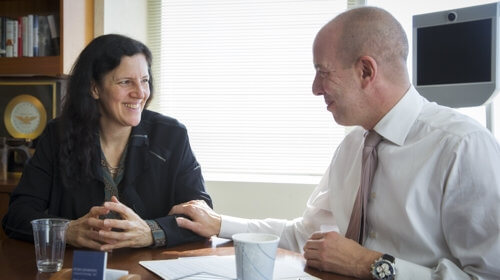 The following is a conversation between Laura Poitras, director of CITIZENFOUR, and Anthony D. Romero in October 2014. They discussed her film, the surveillance state, and Edward Snowden.

Anthony Romero: Your film offers an understanding of Ed Snowden and the NSA revelations in a way that we can't fully do in paper and writing. It brings it to life. And you're behind the scenes in the film, but you're also a protagonist. Talk to me a little bit about your relationship with Ed and about the trust that was built over time. How did he pick you?

Laura Poitras: Ed reached out to me in January 2013 anonymously. I didn't know who he was, and of course the first question I asked him was, "Who are you? And why are you picking me?" He said something very peculiar – that I had picked him. I had been put on a watchlist by the U.S. government. I had been stopped at the border many, many times. He felt that since I had been through that, I would have a unique understanding of the dangers of surveillance.

AR: What has changed since the Snowden revelations? What do you think has happened in our country and across the globe?

LP: We've seen a global shift in consciousness in people's understanding of the dragnet, bulk collection of communications globally. We've also seen technology companies understand that customers want privacy, and come forward with new encryption tools. And we've learned that encryption works. Ed and I wouldn't have been able to communicate for five months without encryption. Unfortunately, we haven't seen enough movement in our government. But, and this relates to the work the ACLU does, we now have documents that tell us what the government is doing, which has opened up the possibility for legal challenges. So we have the ACLU's litigation over the bulk collection of U.S. call records. Judges have called that Orwellian and unconstitutional.

AR: Your film beautifully chronicles the coming of age of a political dissident, from the moment when he first reaches out to you, to the revelations in Hong Kong, to his role as whistleblower and dissident. What does your film do to bring out a fuller picture of Ed Snowden and his motivations?

LP: In previous cases, like Chelsea Manning's, whistleblowers remained incommunicado, so they never got to voice why they made the choices they did. Ed made the choice early on to take responsibility, which allowed me and Glenn [Greenwald] and others to talk to him about why. He sees the expansion of these technologies as a real threat to democracy, and the fact that they're happening in secret without any public debate as really dangerous. He's also someone who grew up on the Internet and felt that it should be a force for good, not a force for human surveillance and control. You see when you meet him in this hotel room that he's undeniably motivated by principles. He's an idealist and he believes in the Constitution. He believes that these are everybody's issues and that the American public has a right to know what their government is doing.

Freedom of the press

AR: Tell me a little bit about the restrictions placed on you. It has not been an easy documentary for you to make.

LP: As a journalist, I have an obligation to protect sources that I work with. I actually moved to Germany because I felt I could no longer protect source material while crossing the border, because I've had things like my computer confiscated. It's not a good sign when journalists feel they cannot freely work or freely cross the U.S. border. So I've had to go to some pretty drastic measures to do my job, which is to protect the sources that entrust me with information. You hear that from lawyers, too. Lawyers don't feel like they can talk on their phone with certain clients, so they have to get on airplanes to meet with them.

AR: How does the film debunk some of the myths that were commonly held about Ed Snowden?

LP: He has said multiple times: I don't want to be the story. That has been consistent. He's never wanted to be the focus of attention. When we were in correspondence, he said to me that he would come forward as the source of the disclosures. And I told him, way before Hong Kong, that if he planned to come forward then I wanted to meet and film him. He said "No, I'm not the story." So it was actually with great reluctance that he agreed to meet me and for my camera to be present. He explains that he's never worked with the media, and that he thinks the media focuses too much on personalities instead of issues.

I made a film about him because I felt it was important to understand why such a young person – with so much ahead of him, 29 years old, making a good salary with a partner that he loved – would risk everything. It was in that context that we met in Hong Kong. Glenn and I both experienced somebody at a point of no return, who decided he was going to sacrifice everything, including his personal life, to inform the public about what the government is doing.

AR: Was there a particular turning point for him that made him decide [to expose the documents]?

LP: I think it was an accumulation over time of what he had witnessed. He says he had been building the tools to amass more state power and more state secrecy, and at some point he couldn't be a part of it anymore. I think the decision to leave the country was informed by seeing what had happened to previous whistleblowers. He obviously knew of the "NSA Four," a group of NSA whistleblowers including Tom Drake and William Binney, who tried to go through the normal channels to expose these things. The government put them under investigation and raided their homes. The FBI showed up with guns drawn. Ed knew very well what happened to whistleblowers who tried to expose what the NSA was doing from inside the system.

AR: Why did Ed give you the documents rather than publish them himself?

LP: He wanted the press to make the decisions about what was in the public interest. In every case, stories have gone through an editorial process. The process isn't easy and these are tough choices. You saw, for example, with the PRISM story – you had both the Washington Post and the Guardian publishing articles on the same document at the same time, without coordinating, making the same choices about what to redact. That document had information that was clearly of the public interest, about the cooperation of Internet companies and the NSA. But that document also had operational things that both news organizations deemed should be redacted. Those decisions have been debated in newsrooms for every story.

There are some things in the documents that I think are operational and shouldn't be published. There are a lot of names in these documents that I don't think should be published and things that don't serve the public interest. But there is an enormous amount of information that exposes what the NSA is doing.

AR: Tell me more about what is on the horizon in terms of other revelations. Is there much more, a little more? And why should our members care? Do you really think that privacy is something still worth fighting for, and that we can win?

LP: In terms of the reporting, yes, there's still a lot more to do. The process does take time. I've worked on stories that take four months to go to print.

LP: Because they require research into the documents, outside reporting to verify, and other sources to get them right. Some documents speak for themselves, and some don't. I think the biggest story that has been underreported is what's called the Special Source Operations or SSO, which is the alliance between the NSA and the telecoms – the AT&Ts of the world – and how they've been working together and sharing information. I think that's the biggest story that hasn't been fully reported.

In terms of why privacy matters for ACLU members – did everyone read "1984" in high school? The chilling effect is profound. There's a point when Winston has to go to the corner of his room because that's the one place he can write in his journal without feeling that he might be monitored. What the government is able to collect is vast. The camera in your laptop can be turned on without you knowing. If you're an activist at Occupy Wall Street, the police use IMSI catchers, basically fake cell phone towers, to get a list of phone numbers of everybody who gathers.

We have the Fourth Amendment, we have freedom of assembly, freedom of expression, freedom of the press – these surveillance programs threaten all of those things at a fundamental level. The government is cracking down on sources and leaks, people who are trying to say that what the government is doing shouldn't happen in secret. Journalists who are working on these stories are now being targeted, rather than people responsible for things like CIA renditions. Where are the committees looking at those things? The White House is trying to hold back a Senate report on the CIA's engagement in torture. That's not what you want to see in a free country, a free democracy.

AR: What's next for you?

LP: I wish I could say that my work is done. I'm sure you wish that too, right? The post-9/11 era is a dark chapter in American history. There's been a moral drift away from fundamental principles of rule of law, full stop. It would be great to say, "Okay we're done. You can stop litigating these cases; I can stop focusing my filmmaking on them." But unfortunately the government is still engaging in policies that are not in line with our Constitution. So I think I'll be focusing on these issues for a while. And hopefully someday soon we can both focus on other things.

Anthony D. Romero is the executive director of the American Civil Liberties Union.