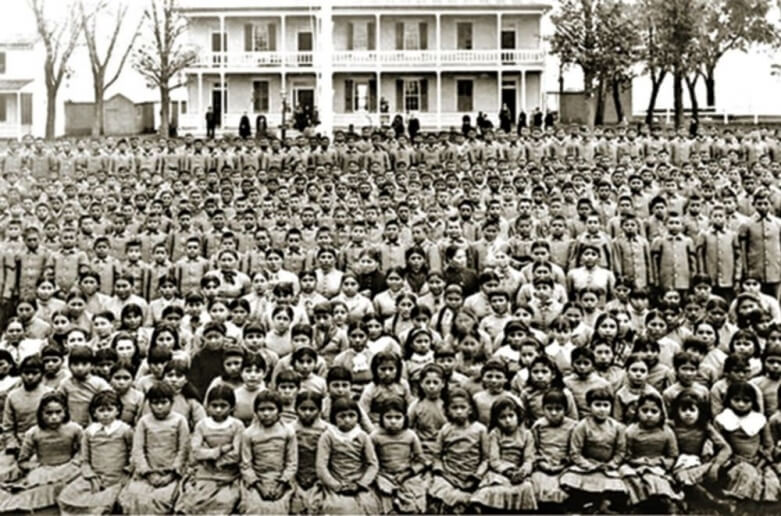 In May 2022, the United States Department of the Interior released Volume 1 of the Federal Indian Boarding School Initiative Report, investigating the centuries-long project that forcibly separated hundreds of thousands of Native American children from their families and tribes. In addition to documenting abuses at these schools, the investigation located 408 schools across 37 states and identified at least 53 previously unknown burial sites.

This report documents what many Indigenous families have known for generations—that the explicit goal of federal Indian boarding school program was to permanently destroy the physical, cultural, and spiritual connections Indigenous people had to their land and tribes in order to erase their identity and make way for the expansion of the United States.

Indigenous students as young as four years old were violently and forcibly taken from their homes and sent, often hundreds of miles away, to foreign and sparse prison-like settings. Upon arrival at these schools, Native children were stripped of all physical markers of their Indigeneity. They were given Anglo or biblical names, their hair was brushed with kerosene and cut, and their clothing was taken away. School staff forbade students from speaking their Native languages or engaging in cultural, religious, or traditional practices—under the threat of severe and “rampant physical, sexual, and emotional abuse.” The report summarizes: “Federal Indian boarding school rules were often enforced through punishment, including corporal punishment such as solitary confinement; flogging; withholding food; whipping; slapping, and cuffing. The Federal Indian boarding school system at times made older Indian children punish younger Indian children.” These purported “schools” were highly regimented and militarized. Students endured malnutrition and shockingly inhumane living conditions and were forced to undertake heavy manual labor as “vocational training,” often in place of academics.

But Indian Boarding schools were not simply places where Indigenous youth were stripped of their culture: The report found that hundreds of Indian children died at these schools and were often buried in unmarked graves. Their families may never have known what happened to them, and contrary to traditional practices, their bodies were never returned home for proper burial or ceremony. The Federal Boarding School Initiative expects to uncover more graves as it continues its investigation.

The report also acknowledges that tribes themselves were often forced to pay for the forced assimilation of their children. Perversely, the federal government took money from Indian Trust Funds – created as a result of massive land grabs and the removal of Indigenous peoples – to pay for the schools charged with civilizing and assimilating Native American children without tribes’ consent or knowledge. Children who survived these institutions lived with profound trauma and grief, as did their communities. Much scholarly research and lived experience demonstrate the deep intergenerational trauma the boarding school system created. Nearly every Native American person alive today is impacted by this history, and many issues facing Indigenous communities, such as inequities in rates of incarceration, housing, police violence, and the crisis of Missing and Murdered Indigenous People, can be traced to these federal policies.

California housed 12 of these institutions, including six in Northern California. Here, tribes are still grappling with this legacy—from the ongoing practice of removing children from their families through the family regulation system, to vast disparities in educational outcomes for Native American students.

Throughout California, Indigenous students face school climates that continue to cause harm. In a recent ACLU report, one Indigenous student in Humboldt County reflected: “I’ve gone to a school where most of the people thought Native Americans were a myth, made racial slurs, made [a] mockery of my culture, and had plenty of different stereotypes of what they thought were accurate representations of Native people.” In a recent incident in Riverside County, a teacher used racist tropes and stereotypes of Native Americans in her classroom as a “teaching tool.” Racism and trauma from incidents like these lead to vastly higher rates of exclusionary discipline, chronic absenteeism, and lower academic outcomes for Native American students.

Our Indigenous Justice work at the ACLU of Northern California seeks to address this painful history. We acknowledge that the public education system was never intended to benefit Native American students or tribal communities. Through work that is led, defined, and informed by tribal communities, we endeavor to end the use of public education as a tool of oppression and cultural genocide; to address disparities in funding and resources; to end excessive and discriminatory disciplinary actions that target Indigenous students; to advance school policies that provide for curriculum responsive to the unique cultures, languages, histories, and tribal-governance systems of native students; and to protect students’ rights to practice traditional customs and traditions at school.

This report is an important contribution to unearthing the full history of federal Indian boarding schools and a small step towards healing and reconciliation. We support the recommendations outlined in the report and agree that the Department of the Interior must fully and publicly acknowledge its role in this history and unequivocally denounce policies, past and present, that force the assimilation of Indigenous Tribes, Alaska Native Villages, and Native Hawaiian Communities. Indigenous communities and sovereign tribal nations have been responsible for the education of their own children since time immemorial and must be given full power to lead the way forward.

The full report can be read here.