Cop: "It's Your Word Against Mine." 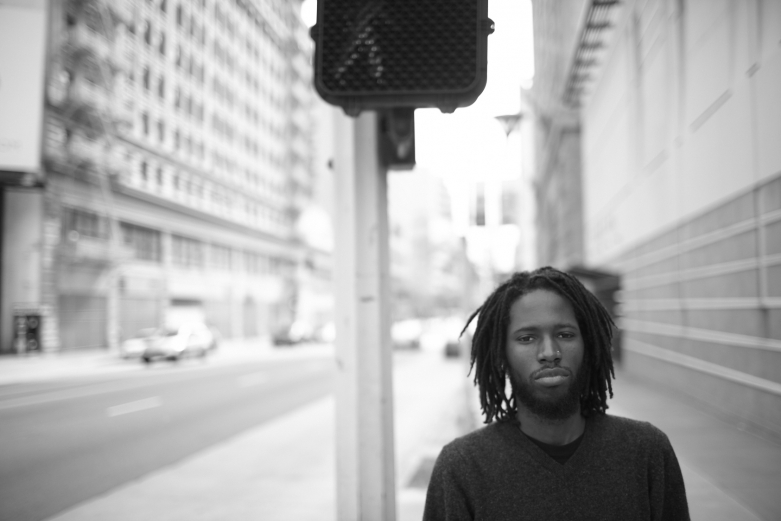 At times during my childhood in the ‘90s, I moved between two distinct communities—one with the sound of gunshots and police helicopters circling overhead in South Central LA, the other in the quieter confines of Westchester NY, where I was bussed to school. In NY, I was surrounded by friends who were black, white, Asian, Latino, Muslim, Jewish, Armenian—a great variety of colors and cultures. We sang Michael Jackson’s “Heal the World” at school assemblies, and inspirational posters featuring photos of ethnic diversity hung in our classrooms proclaiming, “One Race. The Human Race.”

There, we were taught to believe in these messages because diversity was reflected in our community. We were groomed to be colorblind, to ignore people’s hues, and to see people only by their character.

But in California, we lived a different reality. As soon as I was of age, the world stopped seeming so colorblind. Now, as a black male adult, I have become a “threat” in the public eye.

My instinct is to film...especially when alone. As soon as the officer got out of his car, I pulled out my phone and hit record.

One night last November, I was walking on my way to visit a friend in West Hollywood. At an intersection before his apartment, a couple ahead of me crossed successfully. I followed behind. But before I reached the other side of the street, a Los Angeles County Sheriff’s deputy flashed a bright light and signaled me to stop.

He swooped around and pulled up. I’ve been harassed by law enforcement so many times in my life that my instinct is to film any interactions I have with them, especially when alone. So, as soon as the officer got out of his car, I pulled out my phone and hit record.

The officer asked for my identification. I asked him why he stopped me and why I needed to show him my ID.

He refused to answer, and instead grabbed me and slammed me against his vehicle. I placed my phone on the hood of his car before he cuffed my hands tightly and frisked me aggressively. Then he put me in his car while he stood outside and searched through my wallet. He found nothing.

Several curious pedestrians passed by but continued on their way. From the back seat, I called out for help, hoping they would stop and film. But the officer rolled up the window.

I didn’t feel safe in his custody

He then picked up my phone, which was still recording, and deleted the video from the “Camera Roll” folder as well as the copy in the backup “Recently Deleted” folder. The deputy was apparently familiar with the model of my phone and automatically knew to go into that folder to erase evidence of our encounter.

Don't let this happen to you - get the free ACLU app for iOS and Android.

After the deputy re-entered the car, I told him that a friend had warned me of police targeting people of color in the neighborhood. He responded that I should have listened and not gone out in public. After almost a half hour in custody, I was released with an expensive jaywalking ticket. I was shaken but relieved to walk away alive.

Whenever I talked about being mistreated because of my skin color, I was often told that I was being “oversensitive” or “looking for racism where it doesn’t exist.” But I had grown up with other people of color whose experiences were very similar. The painful reality is that the world judges me by my skin color and on that basis alone. I wasn’t imagining it. It wasn’t “all in my head.” These were real experiences.

They are as real as police stopping me for no probable cause and giving the excuse that I fit the description of a burglary suspect. As real as seeing white people cross the street when they see me approaching with my dark skin. As real as hearing car locks snap shut when I walk by, or seeing salespeople follow me in stores, all the while asking: “Do you need any help?”

The truth is that black people in this country live in a completely different reality than others. Whether you’re a black person with the political leanings of Clarence Thomas or Cornel West, you are being judged by the color of your skin. Black encounters with racial prejudice transcend political party and socio-economic class. It is largely a shared experience of repression. And state-sponsored violence is at its core.

When I was a child in the D.A.R.E. program, police officers told us that they were there to protect and serve us. But even as a child, I saw and understood what they did to Rodney King. And I saw how the people rioted after a nearly all-white jury found the cops who beat King not guilty.

The plethora of video footage that has surfaced in the last year has given the public a more accessible view of what blacks experience. And the conversation has undeniably changed. More and more people are starting to understand the significance of #BlackLivesMatter. But how many videos have been deliberately deleted or held back from public view out of fear? How many black lives have been lost off camera in police custody?

Technology is only a tool, but for me it is my protection against police abuse, particularly when there are no witnesses around. The only potential witness that night in West Hollywood was a woman waiting at a nearby bus stop. The deputy ordered her to leave. Unfortunately, I didn’t have the video of my arrest backed up to the cloud.

As the deputy went through my phone, I told him at least three times that he was breaking the law and violating a Supreme Court ruling that declared it illegal for an officer to search through a person’s phone without a warrant.

He laughed and blurted, “It’s your word against mine.”

I was infuriated. But sadly, the reality is that he was right. Truly, how much weight does a black man's word carry in America?

Griffith Fuller, Jr., is a Los Angeles-based writer and activist.