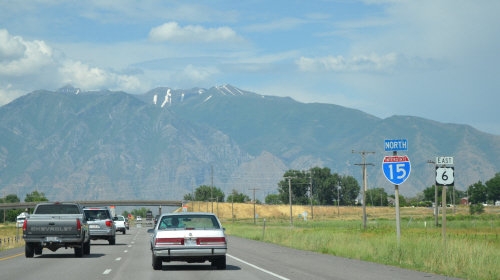 The DEA wants to capture the license plates of all vehicles traveling along Interstate 15 in Utah, and store that data for two years at their facility in Northern Virginia. And, as a DEA official told Utah legislators at a hearing this week (attended by ACLU of Utah staff and covered in local media), these scanners are already in place on “drug trafficking corridors” in California and Texas and are being considered for Arizona as well. The agency is also collecting plate data from unspecified other sources and sharing it with over ten thousand law enforcement agencies around the nation.

We know that automated license plate scanning (ALPR) technology is rapidly beingdeployed by local police around the country. However, its use by a federal agency raises new issues and questions. To begin with, the federal government is in more of a position to create a centralized repository of drivers’ movements, so federal deployment of the technology is even more serious a matter than widespread local deployment.

In addition, a federal agency is required by law (the Privacy Act of 1974) to disclose to the American people how it is collecting, using, and sharing data about them. However, we were not able to find a Privacy Act notice anywhere in the Federal Register in which the DEA describes any collection of license plate data. (The tworecent DEA Privacy Act notices we found do not mention the practice.)

The DEA official claimed to the Utah legislators that “we’re not trying to capture any personal information—all that this captures is the tag, regardless of who the driver is.” The idea that a license plate number is not personally identifiable information is laughable. It is true that different people can drive one vehicle, but they are usually closely related to the registered owner and their identities are rarely difficult to ascertain after the fact.

We have received reports from ACLU affiliates along what the government calls the “SWB” (southwest border) that ALPR technology appeared to be in use at border checkpoints. And we did find mention of ALPR in DEA written testimony to Congress. In May 2009, DEA and Justice Dept. officials mentioned the agency’s use of the technology along the border. They wrote:

Within the United States, DEA has worked with DHS to implement its “License Plate Reader Initiative” (LPR) in the Southwest border region to gather intelligence, particularly on movements of weapons and cash into Mexico. The system uses optical character recognition technology to read license plates on vehicles in the United States traveling southbound towards the border. The system also takes photographs of drivers and records statistical information such as the date, time, and traffic lane of the record. This information can be compared with DEA and CBP databases to help identify and interdict vehicles that are carrying large quantities of cash, weapons, and other illegal contraband toward Mexico.

The word “particularly” in that statement is particularly ominous. In March 2011written testimony, a top DEA official updated the picture:

DEA components have the ability to query and input alerts on license plates via an existing DEA database, and other law enforcement agencies can do the same via EPIC [the DEA’s El Paso Intelligence Center]. DEA and CBP are currently working together in order to merge existing CBP LPRs at the points of entry with DEA’s LPR Initiative. In addition, the FY2010 SWB supplemental provided $1.5 million to expand the LPR initiative by purchasing additional devices and barrels and support maintenance to allow DEA to monitor traffic and provide intelligence on bulk currency transiting toward Mexico.

Note that “the border” as described by the government is not what most people might think it is; the government’s “border” extends 100 miles inward, along with some of the extraordinary powers the government possesses at the true border. We have complained vociferously about this “Constitution-Free Zone,” which, according to our study, actually contains two-thirds of the entire U.S. population.

I note, however, that no part of Utah lies within 100 miles of the real border, so this latest initiative is something more than the one described in the Congressional testimony.

Utah state legislators are rightly skeptical. The law enforcement officials defended the program in part by describing it as an extension of already existing ALPR deployments in the rest of the state. But rather than mollifying the legislators, this answer prompted them to resolve to hold hearings on those local uses of the technology.

This is what you call sugaring a pill so that people will swallow it. Anyone who thinks all of the above will never happen doesn’t know much about history. We’ve seen this dynamic many times—a new surveillance technique is unveiled supposedly for use only against the most extreme criminals and is quickly expanded to much broader use. (To take just one example: DNA testing was first applied only to convicted murderers, then to all convicts, then to certain arrestees who haven’t even been convicted of a crime.)

The DEA official in charge of this program, Gary Newcomb, made it clear that this program is already envisioned as expanding dramatically. He told the Utah legislators that:

Back in 2008 the DEA started a program called the DEA National License Plate Reader Program. It’s going to be deployed in three parts. Part one is, we’re currently deploying all along the southwest border. We’re deployed in Texas, New Mexico, Arizona, and the eastern part of California....

It is not clear what the “other sources” are that are feeding their ALPR data to the DEA. We do know of state efforts to centralize data. Worst case, it’s a preponderance of the rapidly growing list of law enforcement agencies around the country that are deploying this technology.

We actually have data feeds coming from portable trailers all throughout the southern border, from fixed sites as well as from covert barrel cams too [i.e., cameras hidden in traffic barrels]. That is done on a strategic operational level. So that that data is then stored within our back-end. The feds have the ability to query it directly, and we also have the ability where we provided over ten thousand state, local, and tribal law enforcement the ability to access this through the Internet….

The final part is, we’re hoping to start with Phase II, phase II is where we want to deploy along the hub cities and the high-traffic corridors, to include this state, as well as phase III being the northern border. We hope to have this completed within about two to three years max.

Audio of the Utah hearing is online; discussion of ALPRs begins at 1:47:40.

Jay Stanley is the Senior Policy Analyst in free speech, privacy, and technology with the American Civil Liberties Union.