Detained for the Holidays 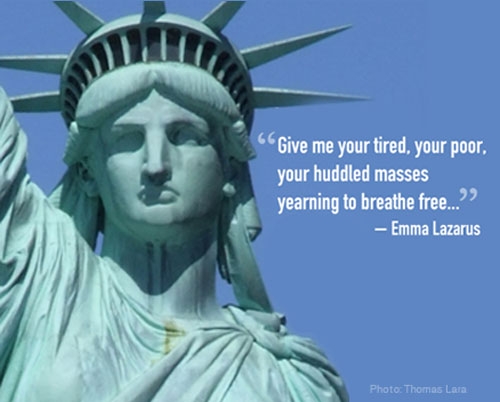 This fall, Zadia* and her son Jose* came to the United States to escape years of physical abuse by her common-law husband. With the help of members of their church, Zadia and Jose fled Honduras. But rather than find refuge, they have been locked up for the last seven weeks in Karnes City, Texas, at one of the federal government's new detention centers for migrant families.

Their detention continues even though the government has found that Zadia and Jose have a "credible fear" of persecution – meaning there's a "significant possibility" they will win asylum. Add to this that they have family they can live with in the United States, and it makes no sense that they could be spending Christmas in immigration detention.

Zadia and Jose's story, however, isn't abnormal, which is why the ACLU today filed a nationwide class-action lawsuit to challenge the Obama administration's shameful policy of locking up asylum-seeking families in order to intimidate migrants from coming to the United States. The case is brought on behalf of mothers and children who have fled extreme violence, death threats, rape, and persecution in Central America and come to our country for safety. Like Zadia and Jose, each has been found by an immigration officer or judge to have a credible fear of persecution. Yet, instead of releasing these families as they await their asylum hearings, which the Department of Homeland Security has typically done, the agency now categorically detains and denies them release on bond or other conditions.

The mass detention of families is cruel, unnecessary, and unconstitutional.

The government is punishing some of the most vulnerable among us – women and children who have legitimate asylum claims. America has now become a country that locks up families who have done nothing more than come here to ask for refuge.

Families seeking asylum don't need to be put in jail. The vast majority of these women and children pose no threat to anyone, and they have every incentive to show up for court to pursue their asylum claims. Their imprisonment also imposesmassive costs on U.S. taxpayers. The United States already spends about $2 billion annually on immigration detention, and the Senate estimates that family detention costs an average of $266 per person per day. In contrast, there are humane and effective alternatives to detention –including bond and ankle monitors—that start at just pennies per day.

Locking up mothers and children as a warning to other migrants is not what our detention system is for. Our Constitution and laws forbid the government from taking your liberty unless you've given it reason for doing so. But the government isn't even bothering to figure out if these women and children pose a danger or flight risk. And, in fact, the vast majority of these families are no threat to anyone and have strong incentives to show up for court and pursue their asylum claims.

Due process doesn't allow the government to lock up families by fiat. The Obama administration should stop using families as pawns and restore basic due process so that no mother or child is locked up arbitrarily.

*Names changed to protect their identities.

The case, RILR v. Johnson, was filed in U.S. District Court in Washington, D.C. Co-counsel are the ACLU's Immigrants' Rights Project, the ACLU of the Nation’s Capital, the ACLU of Pennsylvania, the ACLU of Texas, the Immigration Clinic at the University of Texas School of Law at Austin, and Covington & Burling LLP.

Michael Tan is a staff attorney with the ACLU Immigrants' Rights Project.