Detention Is No Place for Infants, Children, and Families 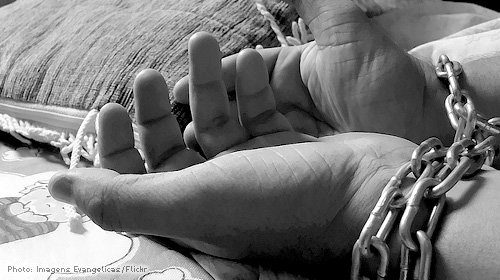 Just before she turned a month old, baby Darla* was released from the Berks family detention facility in Leesport, Pennsylvania. Darla and her mother had been in the custody of DHS since she was just 11 days old. And although Darla will now have the chance to lift her head for the first time in freedom, her mother won't be able to breast-feed her. The combination of malnutrition and the stress of incarceration left her unable to lactate.

Darla is one of the youngest people to be subjected to immigration detention, but the basic outlines of her story are all too common. Her pregnant mother traveled north from Guatemala to escape domestic violence and was apprehended by Customs and Border Protection just over a week after giving birth to Darla. For days, the mother says she and her newborn were detained in DHS hieleras, or "icebox" cells, and forced to sleep in extremely cold conditions with only an aluminum blanket. The two were then transferred to the custody of Immigration and Customs Enforcement and detained at Berks.

Simply put, detention is no place for infants and children. But the Obama administration's decision eight months ago to massively expand the detention of immigrant families with children means that more newborns, toddlers, and young children will suffer imprisonment for no good reason inside dangerous detention facilities.

Sexual abuse, for example, is far too common and detained women are uniquely vulnerable. In the immigration detention system as a whole, the Government Accountability Office found in 2013 that detained individuals face severe challenges in reporting sexual abuse. Although DHS promulgated regulations to stop the sexual abuse of people in its custody in accordance with the Prison Rape Elimination Act(PREA) last year, there is no deadline for implementation at 143 facilities that hold almost half of the people in ICE detention.

Despite being touted by ICE as a model civil detention facility, and one that agreed to implement PREA, Berks is no exception. Just over two weeks ago, a district attorney filed criminal charges against a guard at the facility for seven counts of institutional sexual assault.

The victim is a 20-year-old woman who fled from Honduras with her 3-year-old son after the boy's father beat her severely enough to cause a miscarriage, raped her in front of her son, and threatened her with torture and death. When she was sent to Berks, the guard gave favors to her and her son, and told her he could help with her immigration case. When he initiated sex with her, she did not feel comfortable saying no.

Because a guard can exercise control over so much of a detained person's daily life – including when she can eat, when she can sleep, and when she can be punished – notions of consent have little meaning in this context. That is why PREA treats any sexual contact by a guard as a form of sexual abuse, regardless of apparent consent.

But authorities at Berks apparently did not understand this rule. Rather than educate the women at the facility about their rights under PREA, the facility staff announced new, victim-blaming rules against wearing tight or revealing clothing after the assault. The new rules even restrict what women and girls can wear to bed. Ultimately, the blame for this grossly inappropriate response must fall on ICE for failing to ensure that the facility staff understood and complied with PREA's mandate.

Moreover, this sexual abuse may not have even happened if the Obama administration didn't pursue such a cruel, unnecessary, and unconstitutional policy of arbitrarily locking up families who are fleeing violence in Central America. History shows us that imprisoning families limits access to due process, harms the physical and mental health of parents and children, and undermines the family structure by stripping parents of their authority.

Instead of incarcerating thousands of mothers and children, DHS should be investing in effective, humane, and far less costly alternatives to detention.

*Darla is a pseudonym for the child identified in this post.

Carl Takei is a Staff Attorney with the ACLU National Prison Project.