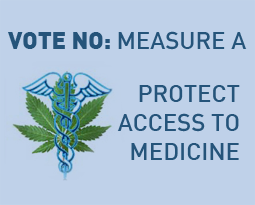 On a recent Saturday, the ACLU of Northern California Shasta-Tehama-Trinity Chapter held its meeting at a local pizza restaurant in Redding.

The room was packed with medical marijuana patients deeply frustrated by unfair efforts of local enforcement to deny them access to their medicine.

But these patients were not only concerned with the injustices of today – they were concerned that things will get a lot worse, and that their ability to access the medicine prescribed to them by their doctors will be even more constrained, if Shasta County’s Measure A passes during this November’s election.

The ACLU of Northern California, including its Shasta-Tehama-Trinity Chapter, urge Shasta County voters to vote no on Measure A. No one should ever be denied access to the medicine prescribed by their doctor. Medical marijuana is legal in California because voters recognized its legitimate value in alleviating the pain, nausea and other symptoms associated with debilitating medical conditions. And the government should never be allowed to intrude upon private medical decisions made by sick patients in consultation with their doctors.

The measure’s onerous requirement that all marijuana be cultivated indoors, in a separate structure, effectively means that most patients will not be able to cultivate the medicine they need. Wherever restrictions such as these are put in place, patients have to rely on dispensaries to get their medicine, which will be particularly difficult for low-income patients and people living in rural parts of the state.

Accessing medicine prescribed by a doctor should never be a crime, but Shasta County’s Measure A would make a violation of these new cultivation requirements a misdemeanor. Sick people should not be criminalized for their efforts to grow the medicine necessary to deal with the pain of debilitating diseases.

Shasta County is not the only community trying to impose restrictions on sick people’s ability to get their medicine. Across California, other communities are flying in the face of state law and attempting to do the same. In 1996, California voters approved the Compassionate Use Act, which allows patients to cultivate medicinal marijuana. California’s voters have spoken. The ACLU of Northern California urges Shasta County voters to stand with their friends and neighbors in need of medicine, and vote no on Measure A.

This blog post was co-authored by Abdi Soltani and Don Yost. Soltani is executive director of the ACLU of Northern California and Yost is chairperson of the Shasta-Tehama-Trinity Chapter.