From Edie to Jim - Same-Sex Love at the Supreme Court 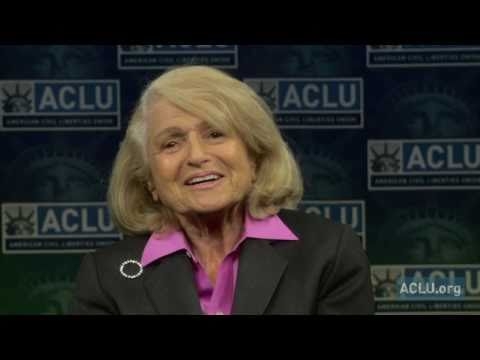 That is what Edie Windsor imagined her late spouse, Thea Spyer, would have said after their love story brought down the core of the federal Defense of Marriage Act in United States v. Windsor. Edie and Thea did do it. They brought down DOMA and – along with hundreds of thousands of other same-sex couples and their families– they transformed our nation’s understanding of same-sex couples and their families.

Their victory, however, wasn’t total, as states could still deny same-sex couples their right to marry and the recognition of their existing marriages. But they started a fire that couldn’t be put out. Just weeks after the Supreme Court struck down DOMA, another couple facing one of life’s greatest tragedies embarked on a journey that now will end before the nation’s highest court as well. Only this time, a win would end marriage discrimination for good.

Jim Obergefell and John Arthur, long-time residents of Cincinnati, Ohio, had been together over 20 years when John was diagnosed with amyotrophic lateral sclerosis, or ALS, also known as Lou Gehrig’s disease. With John already in hospice care, the court’s Windsor decision gave Jim and John a chance to marry and receive the federal benefits that flow from marriage before John’s death. So on July 11, 2013, Jim and John flew to Maryland, where same-sex marriage was legal, in a medically equipped plane. John was too sick to leave the plane so they wed on the tarmac before flying back to their home in Ohio.

A few weeks later, the two men filed a lawsuit in federal court challenging Ohio’s refusal to recognize the couple’s marriage, including on the last official document of John’s life – his death certificate. On that form, the state was going to say that John died “single,” leaving blank the line for surviving spouse.

Making history at the Supreme Court

Almost two years after filing the case, and 18 months after John’s death in October of 2013, Jim’s case, Obergefell v. Hodges, is at the Supreme Court. Just like Edie before him, Jim is about to make history.

On behalf of Jim and the other petitioners in the Ohio marriage cases – Obergefell v. Hodges and Henry v. Hodges – as well as the petitioners in the Kentucky marriage cases – Bourke v. Beshear and Love v. Beshear, – we today filed two briefs at the Supreme Court arguing for the freedom to marry. In addition, there are other couples at the Supreme Court from Michigan and Tennessee fighting for a right already recognized by 37 other states.

Arguing that Ohio’s marriage recognition bans violate the due process and equal protection provisions of the 14th Amendment, our brief in Obergefell begins:

Petitioners married seeking a cherished status that protects families throughout life, from cradle to grave. But Ohio refuses to respect the dignity and status conferred on Petitioners' marriages by other states. From the start of the marriage to the birth of children to the death of one spouse and beyond, Ohio erases the legal relationships of Petitioners' families. Ohio treats these spouses as legal strangers to one another and recognizes only one member of each couple as the legal parent to their children. Ohio even cruelly refuses to recognize Petitioners‘ marriages on death certificates when one spouse dies. Through its marriage recognition bans, Ohio strikes out at a class of individuals whose intimate, personal relationships have been afforded a solemn and special status by other states—men and women who love and marry a person of the same sex.

We call on the court to strike down the marriage bans because, among other things, “No more children should be demeaned by states like Ohio; no more loving spouses should die without the dignity that accompanies respect for their marriages, while the democratic process grinds its slow way towards justice.”

Jim and John had to wait too long to marry because the government thought it permissible to treat people different because of their sexual orientation. As Jim explained at the very first hearing in his case:

[T]his is about more than money or benefits. John will die soon. I love him deeply; more than any other person on earth. I want the world to know that we share the highest commitment two people can make to each other in our society. I recently reviewed a blank death certificate. When John dies he should be listed as married on that document and I should be listed as his surviving spouse. This is the last official record of his life. It breaks my heart to think that this record would omit the most important fact of his life – our marriage.

Now at the steps of the Supreme Court, with the nation watching, we fight for Jim and John, for Edie and Thea, for all the brave couples, families, widows and widowers who have dared to tell their love stories and fight for the rest of us.

Win the freedom to marry in all 50 states »