The End Game is Here for Marriage Equality 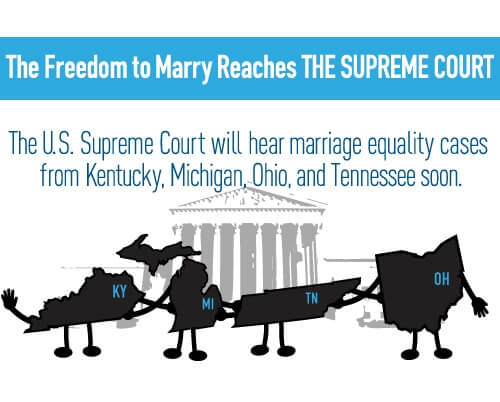 This is it – the end game in the longstanding campaign to win the freedom to marry for same-sex couples nationwide is upon us. The U.S. Supreme Court has just announced it will hear freedom-to-marry cases in all four states in the Sixth Circuit- Ohio, Kentucky, Tennessee and Michigan. We're thrilled to be co-counsel in the Kentucky and Ohio cases.

With today's SCOTUS announcement we are entering what we hope will be the last phase of a journey towards greater dignity and equality for lesbian, gay, and bisexual people that started decades ago and has accelerated at a truly astounding rate over the last year and a half. A win before the high court would be a watershed moment for the LGBT rights movement.

It's clear from a few simple facts that the country is ready for the freedom to marry nationwide:

Adding the remaining 29 percent of the population to the marriage column, while momentous for LGBT equality, would not impose sweeping new change on the country. If South Carolina, Utah, Florida, and Oklahoma are all marriage states, then surely Texas and South Dakota can handle it, too.

It's also evident why marriage is so important. Marriage makes clear that both the state and society value and protect a relationship. Same-sex couples have been making the commitment at the heart of marriage for decades, but they have been treated as legal strangers by state after state and told that their relationships are less worthy.

Plus, showing the country all the same-sex couples who want to marry –and who do marry – has helped people understand that gay people's relationships are built around love, often are long-term, and increasingly involve raising children who thrive. All of those realities, which gay people find unremarkable, help the rest of America overcome the anti-gay stereotypes that they grew up with.

Finally, it's clear how we've gotten to this moment of such promise – through decades of concerted effort by LGBT people and allies all across America. The ACLU is proud to have been part of getting us here. We brought the first lawsuit in the country seeking the freedom to marry for same-sex couples in 1970. Over the years since then, we have worked in courts, legislatures, and in ballot campaigns to win marriage equality all across the country. We represented Edie Windsor in her landmark case taking down the core of the Defense of Marriage Act in 2013 and have filed 17 marriage cases since then, covering every region of the country.

What's not clear – yet – is just how the end game, well, ends. We'll know that come summer, but we do already know several things: That if we win, the country can handle it. That if we lose, we will still change the remaining anti-gay laws by going back to the ballot. And that we can never stop working to change the culture in America so that it understands and embraces LGBT people in all of our wonderful diversity.

Marriage will help us do that, so we welcome the end game – bring it!