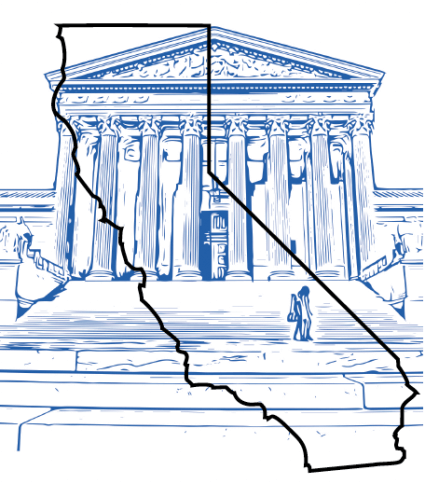 “The [U.S. Supreme] Court’s precedents about bodily autonomy, sexual and familial relations, and procreation are all interwoven—all part of the fabric of constitutional law, and because that is so, of our lives.”

So reads the dissenting opinion in Dobbs v. Jackson Women’s Health Organization, the case under which the U.S. Supreme Court, on June 24, 2022, struck down the constitutional right to abortion established under Roe v. Wade. It is the only moment in which the term “bodily autonomy” appears. But it is resonant.

While a contested concept under the law, bodily autonomy remains a core principle within the Reproductive Justice movement, founded by feminists of color in the early 1990s. They base their cause in “the human right to maintain personal bodily autonomy, have children, not have children, and parent the children we have in safe and sustainable communities.”

The Reproductive Justice framework, adopted by the ACLU of Northern California, recognizes that this right has historically been denied to marginalized groups through state-sanctioned control over, and violence against, the body.

The archive of ACLU News shows that California history is replete with the stories of marginalized people fighting attempts by the state to assert control over their bodies and wrest their most personal decisions away from them. A look at just a few of them illuminates many guiding principles of the Reproductive Justice movement—including that the fight for abortion rights comprises just one part of a long line of attempts by marginalized communities to secure their right to self-determination.

They also provide lessons for the work ahead as the ACLU responds state by state to protect, regain, and advance reproductive justice.

You can explore the archives, spanning over 75 years of California history, at www.aclunc.org/CHS. 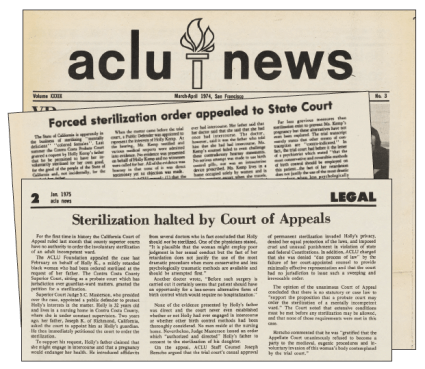 One of the most widespread violations against bodily autonomy in 20th-century American history occurred here in California. It was home to the largest eugenics movement in the nation, which lobbied for the forced sterilization of poor people, people of color, people with disabilities, and others deemed part of “defective” lineages, all in the name of “social progress.”

Forced sterilization represents the ultimate denial of bodily autonomy, violating the very integrity of a person’s body and stripping them of their authority to decide whether or not to have children. In California, for decades, the state wielded that authority in tens of thousands of cases, to devastating effect.

According to historian Alexandra Minna Stern, by the time California’s 1909 eugenics law (known as “The Asexualization Act”) was repealed by the state legislature in 1979, California had “sanctioned over 20,000 nonconsensual sterilizations on patients in state-run homes and hospitals, or one third of the more than 60,000 such procedures in the United States in the 20th century.”

In the 1970s, stories of nonconsensual sterilization, and the legacy of eugenics, began to emerge into California’s public consciousness. We see such stories begin to appear in ACLU News editions from that decade.

For instance, a 1974 issue tells the story of Holly Kemp, a 32-year-old Black woman with an intellectual disability whose father petitioned the state courts to have her forcibly sterilized. He contended that “any children would be a financial burden on the people of the State of California.” The Contra Costa Superior Court granted his request.

ACLU NorCal represented Ms. Kemp on appeal. Among the arguments presented were that she had received incompetent representation from her appointed counsel, who had failed to challenge troubling or contradictory statements. For instance, “[n]ot one of the twelve documents relied upon by the trial judge recommended sterilization,” according to ACLU News. The only doctor who made any recommendation had “specifically recommended against sterilization.” And another doctor, reflecting the racism and ableism that drove the eugenics movement, had described Ms. Kemp as a “mentally deficient colored female.”

In December 1974, Ms. Kemp prevailed in her case. The California Court of Appeal ruled, for the first time, that the Superior Court had no authority to order involuntary sterilization.

But the legacy of eugenics would continue into the following decade.

In this, we see that the insidious ideals underlying harmful laws and policies often endure long after those laws and policies are repealed. It takes persistence and bravery on the part of individuals like Ms. Kemp to challenge them, and many more years of coordinated advocacy to beat them back.

In the late 1970s and into the 1980s, the legacy of eugenics served as a backdrop for one of the most significant battles for abortion access in California.

To understand why, we must look back to the 1960s, when federal agencies began to distribute funds to states for sterilization procedures as part of President Johnson’s “War on Poverty” initiative. According to historian Stern, the focus on family planning for the poor marked a “shift in the criteria employed to sanction reproductive surgery.” So, rather than defend sterilization through the junk science of eugenics, the focus switched to an individual’s “parenting skills and welfare dependency.”

That focus, too, had sinister consequences. ACLU News reports that poor people receiving government aid were “continually pressured by welfare authorities to undergo sterilization in order to cut state costs.” The March-April 1974 edition notes that, in some instances, people “volunteered” to undergo sterilization “after being expressly threatened with termination of aid.”

In 1978, California’s legislature voted to end funding for abortions under Medi-Cal, the state’s medical aid program. The cruel irony, repeatedly referenced in ACLU News, was that the state would still pay for sterilization for the poor.

This sparked a protracted legal battle, spearheaded by ACLU NorCal and community partners, to protect Medi-Cal coverage of abortion. Over nine years, the coalition filed ten consecutive legal actions as the legislature introduced abortion coverage restrictions in every budget act. Every year, the coalition prevailed, and the courts struck down the funding cuts. Medi-Cal continues to cover abortion to this day.

However, to this day, people in California who live in poverty and in rural counties continue to face barriers to abortion care. This evokes a central tenet of the Reproductive Justice movement: for people whose existence has been relegated to the margins of society, the barriers to reproductive rights are even greater, and we must dedicate our work to breaking them down. 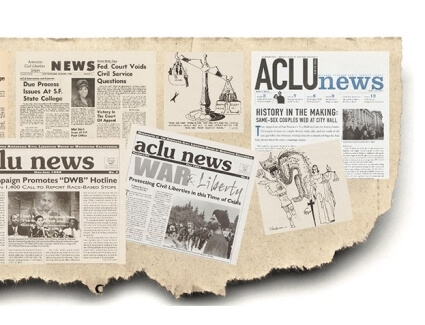 A historical archive is as significant for the stories that it includes, as for the stories that it has not told. The absence of certain voices shows us which viewpoints have been prioritized in our collective histories, and which experiences have been relegated to the margins, or erased altogether. The Reproductive Justice movement teaches us that, if we do not include the voices of people at the margins of the struggle, then we are not telling the most inclusive and accurate story of the battle for reproductive justice.

Nowhere in the archive has a story like Lucas’* been told.

In 2021, he moved to the U.S. from Mexico with his partner and one-year-old daughter. Shortly after arriving in Los Angeles, he found himself pregnant. A social worker helped him to enroll in Medi-Cal, and Lucas made an appointment to see a nearby provider for pregnancy care.

A few hours after making the appointment, a clinic staff member called him back and asked him questions about his appearance, and about what type of clothes he wore. When it became clear that Lucas is a transgender man, the staff member told him, “We don’t accept people like you.”

The next morning, Lucas and his partner went to the clinic to try and reinstate the appointment. Clinic staff again turned them away. “They told me that they didn’t specialize in trans people, that they only could help ‘normal women,’” Lucas recalled. “I explained that they didn’t need to specialize in anything, that I just wanted medical care for my pregnancy. I was on the verge of tears. I was so disappointed that I fell into a deep depression.”

The ACLU of Southern California, in partnership with TransLatin@ Coalition, is currently representing Lucas in fighting the discriminatory denial of care. This is because reproductive justice and bodily autonomy entail not only the right to abortion, but also the right to bear children and raise those children with dignity.

Narratives about reproductive healthcare have historically been framed as only a women’s issue, but these rights apply to transgender people, just as they do to cisgender women.

Lucas gave birth to a healthy baby earlier this year.

“I want people to be more aware that transgender people are going to choose to have children if they want, and that I won’t be the only one,” said Lucas. “And I want people in the transgender community to know that they can overcome any obstacle. They shouldn’t give up. The doors might keep closing, but there will always be a way forward.”

Sarah Hopkins is a communications strategist at ACLU NorCal.