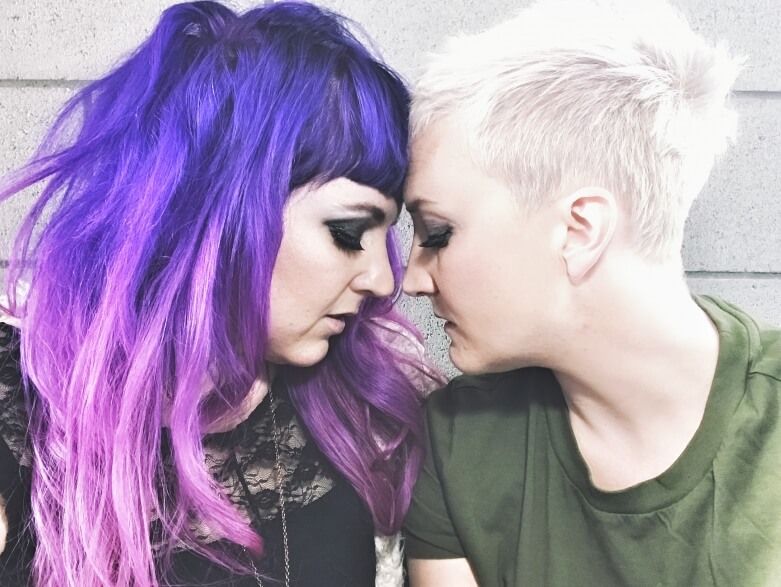 My wife and I have made music together for the past 8 years, in an independent band named Unsung Lilly. We are passionate about creating epic, empowering pop music.

As a same-sex couple, we have been heartened recently by the improved representation of LGBTQ people on television, and we are grateful that most people we meet are accepting of our relationship. It’s enough to make you think that maybe society has fully accepted that ‘love is love.’

Unfortunately, our recent experience with Facebook suggests otherwise. When Facebook’s platform refused to allow us to fully express ourselves as both artists and a same-sex couple, it brought back painful memories of discrimination against the LGBTQ community.

Like all musicians, COVID hit us hard. We lost all our income, and because we were in the United States on work visas, we were unable to claim unemployment benefits without risking our visas.

We were in a difficult spot, and we turned to our community on Facebook for help. We asked our fans to join our Patreon community and go behind the scenes of the creation of our new album, in the hopes that their support would keep us afloat in these unprecedented times.

We posted a video on Facebook, announcing our new album and encouraging fans to join our Patreon page. We made it a sponsored ad so we could reach as many of our fans as possible.

The ad, unfortunately, was rejected. While this happens sometimes, I couldn’t believe it when I saw the reason: Facebook had labeled our video as containing “adult sexually explicit content.”

Assuming there must have been a mistake, we sought multiple appeals and resubmitted the ad several times, but each time received the same rejection message.

We wracked our brains wondering what could be sexually explicit about our video…and then realized that it might be the image of us early in the video. It’s a romantic image of us with our foreheads touching. We use the image for all our profile photos across all platforms because we believe it’s a beautiful artistic shot of two people in love. You can watch the video here.

When we talked about what happened on our social pages, many of our friends and fans shared our outrage. Some people even came up with possible explanations for why the ad was rejected. These ideas included theories such as “Facebook doesn’t allow intimacy of any kind in their advertisements, it would have been the same with a hetero couple,” and “what about the nature of some of the dancing shown later in the video.”

We wanted to understand why our ad was rejected. So, we ran a test. We posted another ad with the exact same video and copy, but we changed the photo of us to a ‘nonromantic’ photo. The ad was approved.

Next, we tried the same video and copy but replaced the photo of us with a picture of a heterosexual couple in the same romantic pose.

Guess what? The ad with the heterosexual couple was approved too.

The ACLU helped us contact Facebook. The company claimed the ads were rejected ‘incorrectly’ and assured us that the rejection had nothing to do with the LGBTQ content, but rather the dancing in the video. They would not explain why the ad with the exact same dancing but with a heterosexual couple was accepted in our tests.

If Facebook is restricting LGBTQ content because Facebook’s systems consider our kind of love to be “adult” and “sexually explicit”, that means they are actively erasing the LGBTQ experience and silencing LGBTQ voices.

As members of the LGBTQ community, we know how important it is to see ourselves represented and reflected in the media. Visibility can save lives, particularly for transgender people, LGBTQ people of color, and youth.

Women are often over-sexualized, and female couples even more so. Two women in love, gently resting their foreheads together is romantic—not sexual. By rejecting images like this, Facebook is reinforcing the hyper-sexualization of women and female couples.

When we spoke on social media about our experience, other LGBTQ people shared similar stories of being censored by Facebook. These are not isolated incidents. In fact, we learned that Facebook has a history of censoring LGBTQ advertisers. And Facebook’s problems are not limited to the LGBTQ community, Black creators documenting police violence have recently seen their pages temporarily taken down completely. Facebook calls these “mistakes” but isn’t doing enough to stop them from happening again.

Facebook is a platform that claims to connect people, so why does their platform silence LGBTQ voices and prevent them from connecting with their communities? Facebook has a responsibility to represent everyone in a fair and just manner. That means addressing how the LGBTQ community can feel at home on Facebook when the platform appears to discriminate against members of our community for showing who we are.

Today we join the ACLU of Northern California in calling on Facebook to take the following steps: