The House that Ruth Built: ACLU of Northern CA Reflects on the Legacy of RBG 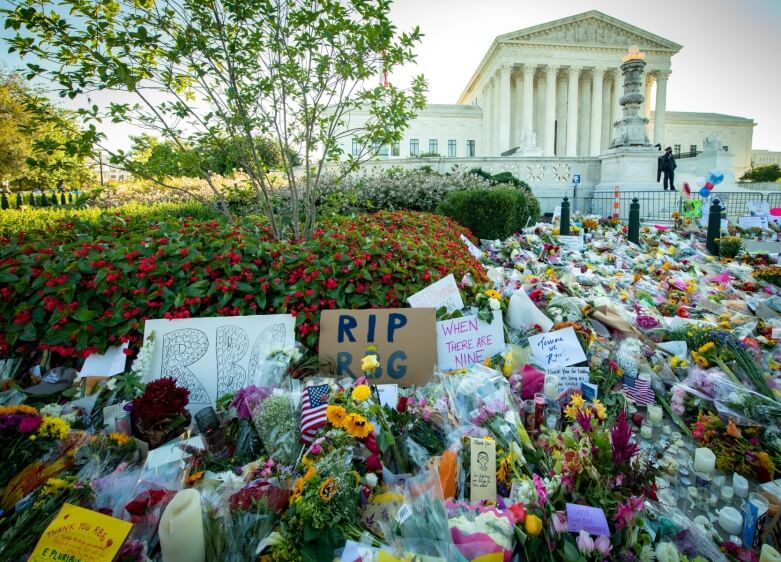 It’s easy to forget that not so long ago, it was considered radical to suggest that men and women should be treated as equals. People were pigeonholed into strict gender roles, regardless of their interests or talents.

A majority of white women were mostly care-givers and homemakers, and their white male spouses, breadwinners. Racism generated different pernicious gender role stereotypes for Black people and other people of color. Sex discrimination against all women was rampant and the courts allowed it to flourish.

Justice Ruth Bader Ginsburg was a trailblazing social justice warrior who made it her life’s work to tear down gender-biased laws, one court case at a time. But she didn’t just argue that women should be treated equally. She fought to get rid of predetermined gender roles altogether, to free people from the suffocating constraints imposed by them.

Ginsburg broke open doors of opportunity not just for women, but for everyone.  A number of the lawsuits she filed were on behalf of men who had been denied caregiving and other benefits (such as “widow” benefits) because of the narrow ideas, reflected in the law, of women’s and men’s social roles—what we now think of as gender stereotyping.

During the 1970s, as head of the ACLU Women’s Rights Project, Ginsburg fought hundreds of important legal battles against gender discrimination, many of them before the Supreme Court. It was she who convinced the courts that the 14th Amendment guarantee of equal protection should apply to gender as well as race, building on the pioneering work of Pauli Murray, a Black civil rights attorney.

This was the house that Ruth built. One that laid the foundation for so much of our work here at the ACLU of Northern California.

It’s because of Ginsburg’s pioneering legal advocacy that we have any protections for workers who are parents, such as family leave. That means eligible workers can receive a portion of their salary while they take care of seriously ill family members or welcome the arrival of a new child. In a recent major legislative victory, California’s family leave program was strengthened to ensure that employees can take this leave without fear of losing their jobs.

Ginsburg’s work was also necessary for our advocacy for accommodations for pregnancy and breastfeeding in the workplace, as well as in schools.

“It’s not just about getting the same job or the same healthcare as a man, but about being able to have work and healthcare that accommodate our actual needs in pregnancy, parenting, and other caregiving,” said Elizabeth Gill, a Senior Staff Attorney with the ACLU of Northern California and the National ACLU’s LGBTQ & HIV Project.

Ginsburg’s life’s work also provided the legal precedents for fighting against another form of gender stereotyping: discrimination against LGBTQ people.

“As a gender and reproductive justice advocate, I’ve drawn tremendous inspiration from RBG’s commitment to fighting for the right of individuals to do what they want with their bodies, free from coercion or control by other people and from the state,” said Arneta Rogers, a Reproductive Justice & Gender Equity Attorney. “It’s a central tenet that guides our work and practice on behalf of women, queer and trans people, communities of color, and low-income people who face the greatest barriers to being able to exercise this right.”

While we join the millions mourning our beloved RBG, at the ACLU of Northern California we feel a particular connection to her, since she was once on the staff of the National ACLU. Her passing has also affected many of us in personal ways. We want to take this opportunity to share some of our staff’s reflections on her legacy.

“I took particular interest in the fact that legal titans can be of small stature since I am 5 feet tall with no heels,” Agarwal said. “More recently, as I have struggled balancing the rigors of my profession and the demands of parenting two small children, I have taken comfort in RBG’s perspective. She saw her own balancing act as an asset. Each part of being a mother and a lawyer, she said, ‘provides respite from the other’ that gives one a sense of balance and proportion.”

Ginsburg also fought to free men from the constraints of their perceived gender roles so they could participate more fully in the lives of their children.

“RBG broke down barriers and stereotypes associated with gender, and the impact of that benefits us all,” said Abdi Soltani, Executive Director of the ACLU of Northern California. “When my children were born, I was able to take parental leave – not just under the law and according to my employer’s policies, but also within evolving norms of culture. In a previous generation (and in a different country at that time), my dad did not have that opportunity.”

Ginsburg’s grit and determination during her long battle with cancer further inspired us.

“She fought cancer five times, but we would constantly hear stories of how she rarely, virtually never, missed a day on the bench,” said Communications Administrative Assistant Rachel Weaver. “Her constant uphill battle reminded me of my own grandfather and the countless health challenges he faced, but like RBG he was persistent.”

RBG became a popular icon later in her career, as countless men and women applauded not only her perseverance in the face of so much adversity, but also her style and chutzpah.

“I admired her assortment of Supreme Court robe collars, some of which were comparable to the Maasai women of Kenya and Ndebele women of South Africa, whose beaded, colorful, and intricate collars represent a shared creativity and power,” said Communications Director Candice Francis. “I embraced RBG because she knew how to calibrate her words so that they landed with full effect. ‘I dissent’ was all she said after Bush v. Gore was decided, ditching the word ‘respectfully.’ In today’s vernacular we would call that ‘throwing shade.’”

Justice Ginsburg was the first Jewish woman to sit on the Supreme Court. Rebekah Pinter, our Human Resources Generalist, who is also Jewish, said she found Ginsburg’s presence reassuring and empowering in the midst of rising anti-Semitism.

“RBG gave a beautiful speech in 2004 at the U.S Holocaust Memorial Museum where she spoke about the work that we cannot turn away from,” Pinter said. “I will miss her voice. But it would be a disservice to her to step away from the work. This moment needs all of our heads, hearts and hands. We have justice to pursue!”

Phyllida Burlingame is Legal-Policy Co-Director (Policy) at the ACLU of Northern California.

Tammerlin Drummond is a Communications Strategist at the ACLU of Northern California.