The Humanity of Dorsey Nunn 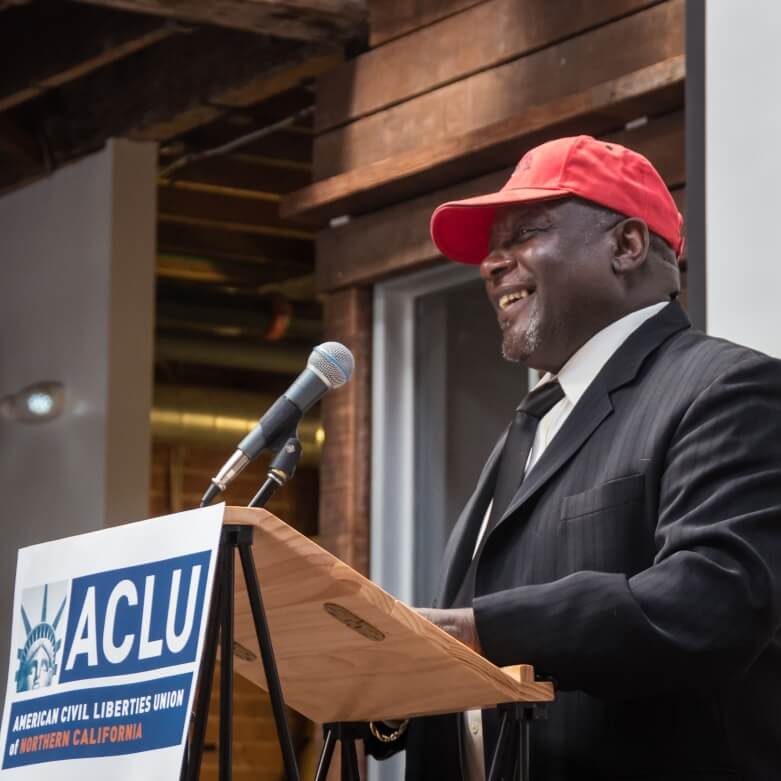 The following is an excerpt of Dorsey Nunn's speech accepting the Chief Justice Earl Warren Civil Liberties Award at the ACLU of Northern California's annual Bill of Rights Day celebration and party.

I want to give expressions of gratitude to the ACLU for giving me this award.

Every time I’m referred to as an offender, I flinch.

Now suppose I would go around introducing you, “This is so-and-so, the liar.”

Suppose I would do that to you. Then expect that you’re going to get a good business deal. Then expect to get a decent partner who believes you every time you come home late.

Because if I don't have the right to vote, I don’t participate on juries, I don’t get to run for office, I don’t have the basic rights that come with citizenship, I don't know if I'm a returning citizen. Why not call me a returning astronaut? Or a returning doctor?

So when I’m checking off that box that asks, “Have you ever been convicted?” I know it's something structurally being asked of me. It’s not necessarily being checked off by other people.

In 1975, I decided to return from San Quentin Prison to my community as an asset instead of a liability.

I'm really honored that my grandkids came with me today, because maybe their presence helps others see me attached to a family and as a man. People were unable to see slaves as people or parents. The same thing may be true for prisoners.

Expanding voting rights for all

I appreciate all the work we did expanding the right to vote – I’ve been involved with the ACLU on at least four cases fighting for the right to vote. But every time I'd tiptoe around what the real issue was for me.

I wish I could say it was an easy thing to do. And half of my friends don't get to come. At a certain point we started building something together, and the first thing we said we wanted to do was speak in our own voice. It's fundamental that we have a voice and a say-so for the things that we want to accomplish and want to do.

Sen. Cory Booker introduced a bill to actually Ban the Box federally. (That checkbox on job applications, “have you been convicted of a felony.”) And a lot of the national civil rights organizations signed on to it, even though we were at the table with them. The formerly incarcerated people elected not to sign on to it because what they were signing on to didn't have teeth in the legislation.

For the first time, I recognized that it was in our disagreements where we put in the work that counted. Ruthie Epstein, an ACLU lobbyist in Washington, D.C. stood up against the White House and said the decision wasn't theirs. That the decision was with formerly incarcerated people and the ACLU was standing in alliance with us.

So I'm extremely grateful for this award. I'm even more grateful for a continuous relationship with the ACLU.

People who aren’t your friends generally don't listen to you that long when you're in disagreement. They generally collapse and they fade away.

Frederick Douglass had something difficult to say.  So do I.

For everybody here that's the head of an organization, I need to ask you what your employment practices are. Do you have any formerly incarcerated people working for you? Because if you don't, then how do we expect to get to equality if you don't develop fellowship programs, particularly for us who have had limited education and a difficult time getting a job?

Once, I was able to save up a hundred dollars to get on the pre-TSA checklist, but I'm permanently banned.

So nobody at the airport is thinking I could be having a traumatic experience when people are touching me, shaking me down like I was in prison?

When I tried to pay my way past that experience, my money was no good.

After 9/11, how many of us become un-American? I think that we're making too many people not Americans. And we need to think about: how did your neighbor next door become not American based on 9/11? I may not be an American – not based on how I’m treated regularly by society.

Finally, when you say All of Us or None – that poem comes from the memorial case of one of my oldest friends, Nate Herrington. So when you hear us marching around, some of us died to wear his name.

Dorsey Nunn is the Executive Director of Legal Services for Prisoners with Children and the co-founder of All of Us or None, a grassroots organization that fights for the rights of formerly- and currently-incarcerated people and their families.