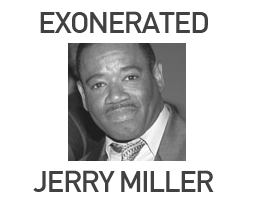 Jerry Miller, a former Army cook, spent nearly 25 years in prison for a crime he did not commit.  In 1981, at the age of 22, Miller was tried and convicted for the brutal rape of woman in downtown Chicago. His conviction was based on what is now understood to be mistaken eyewitness identification.  Twenty five years later, DNA testing on semen from the rape proved that Miller did not commit the crime.

Jerry Miller is now 48 years old. He spent more than half of his life behind bars, imprisoned for a brutal crime he had nothing to do with.  He has the distinction of being the 200th person freed by the New York based Innocence Project as a result of post-conviction DNA testing.

Research indicates that stories like Miller's may be more common than we think. These 200 exonerations may only be the tip of the iceberg.  Some measures of wrongful convictions estimate that 1% of the current 2,000,000 people in prison are innocent. This capacity for error shows that there are fundamental flaws within the criminal justice system that cannot be tolerated.

Jerry Miller walked out of prison after 25 years, becoming the 200th person exonerated as a result of post-conviction DNA testing by the Innocence Project. But now what will happen to him?

Unfortunately for Jerry and other exonerees, rebuilding a life after exoneration can be a challenge.  Most often, the state releases them with no monetary compensation and little more than an apology.

According to the Christian Science Monitor ("What Do States Owe the Exonerated?"), fifty-five percent of exonerees have received no compensation from the state for the time they spent unjustly imprisoned. Additionally, only 21 states, and the District of Columbia, have standardized compensation laws. In 29 states exonerees have no legal guarantee of receiving any compensation for the time they spent in prison or to help them rebuild their lives. In California, exonerees are eligible to receive up to $100 per day spent unjustly imprisoned. However, exonerees often face several legal and bureaucratic challenges in applying for these funds, and it is often years before they see a penny of compensation.

Exonerees face numerous challenges when they are freed. Many of them have lost family and friends during the years they spent wrongfully incarcerated, and have depleted any savings on legal fees. As a result they have little or no money and few social connections to help them reestablish their place in society. Furthermore, exonerees face major obstacles when searching for employment. Because they have spent years of their lives imprisoned, exonerees often lack the technical skills and experience necessary to be competitive in today’s job market. Astonishingly, most states refuse to expunge the criminal records of exonerees, and employers often decline jobs to exonerees because of their prior convictions, even once the circumstances are explained.

Click here to read more about the the Commission's recent reports that address remedies for wrongful convictions.

For more information and to find out how you can help, visit: