Marriage, California and You 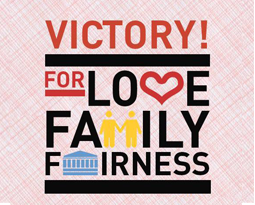 As everyone has now heard, the U.S. Supreme Court issued two historic decisions today for LGBT Equality – striking down the federal Defense of Marriage Act (DOMA) as unconstitutional and returning marriage to California, by dismissing the appeal in the Hollingsworth v. Perry (Prop 8) case for lack of standing. What does this mean? Essentially what we've been saying all along – that the folks who oppose the freedom to marry can't show that they are harmed by our marriages in any way. In fact, when gay and lesbian couples are allowed to marry families are helpedand no one is harmed.

Brief history: the plaintiffs in the Prop 8 case (two same-sex couples) sued the California officials in federal court for enforcing Prop 8 and therefore denying them marriage licenses. After a trial (in which the Prop 8 proponents as intervenors were allowed to make arguments in defense of Prop 8), Judge Walker issued a decision finding Prop 8 unconstitutional. None of the state defendants chose to appeal.

The question the Court answered today was whether the Prop 8 proponents, on their own, had suffered sufficient harm to be able to appeal Judge Walker's decision, a requirement in federal court. The answer was a resounding "No." Chief Justice Roberts, writing for the Court, concluded that the Prop 8 proponents had no "direct stake" in the outcome of the case; that no matter how "zealous" their advocacy, they could not show that marriage for same-sex couples affected them in any "personal and individual way."

Because the Court concluded that the Prop 8 proponents shouldn't have been allowed to get to the Court in the first place, the Court vacated the decision of the Ninth Circuit, which means that Judge Walker's decision will now stand as the final word on Prop 8. Although the Court did not in address the merits of marriage for same-sex couples, this ruling is a huge victory. California's Governor and Attorney Genera have already come out and said that as soon as the decision goes into effect – approximately a month from now – same-sex couples will once again we able to marry around the state.

The ACLU has been working on getting marriage for same-sex couples in California for decades – we were one of the groups that won marriage in our California courts; we fought hard to defeat Prop 8; and we have supported the Prop 8 case in amicus briefs at every stage. Although we wish California could have stayed the second state to recognize the freedom to marry, we are still proud today that California is the 13th state (plus the District of Columbia). Because of today's victory in California, a full 30% of people in this country will soon live in a freedom to marry state.

We now look forward to returning California to the status of one of the most progressive states for LGBT people in the country, and to realizing the full potential of our good state laws for all Californians. We're in the Central Valley and Inland Empire making sure LGBT youth are protected from discrimination, harassment, and biased instruction, and we're supporting a bill in the Legislature (AB 1266) that would clarify that transgender students have the right to use the sex-segregated facility that accords with their gender identity. The ACLU's work continues for full equality for LGBT people.

Elizabeth Gill a staff attorney with the ACLU of Northern California.