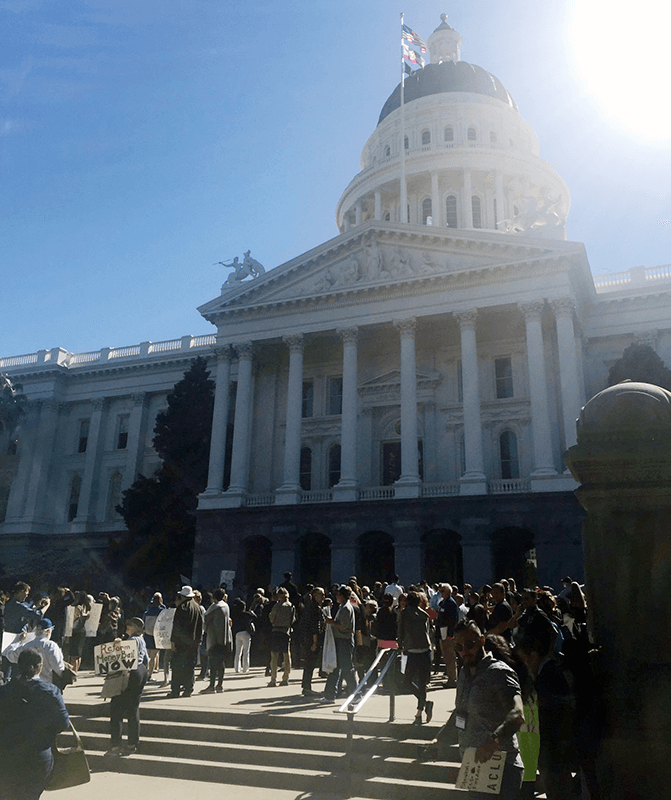 This Mental Health Month, and every other month of the year, advocates are calling on California leaders to put an end to this and instead prioritize services to promote communities’ health and wellbeing.

That’s why advocates will be gathering at the California Capitol this Wednesday, May 24, 2017 at 9:30 a.m. for Mental Health Matters Day, a free event to amplify the voices of those living with mental health conditions and call on policymakers to support initiatives to improve the lives of impacted Californians. This year, reforming money bail is included as a top priority.
Learn more »

What does bail reform have to do with mental health?

People living with mental health conditions are grossly overrepresented in our criminal justice system in large part because of our money bail system. Typically, when someone is accused of a crime, people have to pay money up front to be released from jail while they await trial. It is an outdated, inefficient, and deeply unfair system that keeps jails full of people who have not been convicted and inflicts disproportionate harm on low-income communities and communities of color. Money bail also disparately impacts people living with mental health conditions, contributing to high rates of incarceration for this population.

Even short jail stays can lead to interruption in treatment and loss of employment and/or housing. Jail is also a traumatic environment, especially for those with mental health conditions. Most will receive little or no mental healthcare, and for many, incarceration will make their condition worse. Many will be subject to physical and/or sexual abuse. And in California, 80 percent of all jail deaths occur during pretrial detention, with suicide making up a quarter of these. Locking people up while their case is pending, often because they are unable to pay money bail, can be a matter of life or death.

Because people with mental health conditions are more likely to be detained pretrial, they are often caught in a system-perpetuated loop of justice-involvement. Each additional stay in pretrial detention can worsen mental health status and increase the risk of recidivism.

California needs to do a better job of connecting people with the services they need as soon as possible, instead of forcing people to buy their freedom or sit in jail awaiting their court date. These services cost less than incarceration and provide better outcomes, including lowering the likelihood people might return to jail in the future.

The California Money Bail Reform Act, AB 42 and SB 10, introduced by Assemblymember Bonta and Senator Hertzberg, would reduce California’s reliance on money bail and move us towards a system where people are directed to the services they need – not unnecessary and potentially harmful jail time. These bills are based on effective solutions implemented in other parts of the country that provide more equitable treatment of individuals while promoting the wellbeing and safety of all communities. AB 42 and SB 10 represent the change California needs for a fairer justice system; a system where someone’s freedom does not depend on their bank account balance, association, or mental health status.
Learn more »

Kellen Russoniello is a Staff Attorney with the ACLU of California.