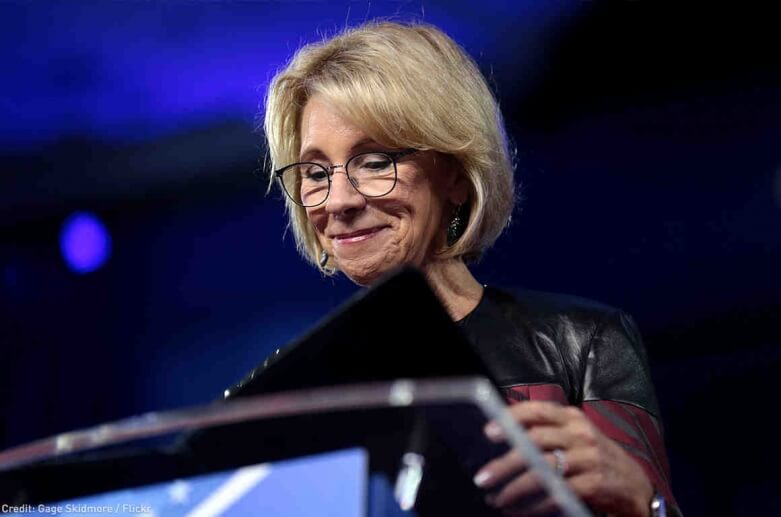 Education Secretary Betsy DeVos recently referred to opponents of vouchers as “flat Earthers” who have “chilled creativity” in the education system. While jarring, her comments will not come as a surprise to those who followed her confirmation. It was clear then, and remains so now, that Secretary DeVos is a dogged opponent of public education. She has dedicated years and a considerable fortune into working to attack public schools.

Secretary DeVos is entitled to her opinion, but not her own facts. Study after study has shown that voucher programs do not result in improved academic achievement. In fact, students who participate in the programs actually fare worse than their peers.

Voucher programs drain public schools of desperately needed resources and divert them to private and religious schools. Taxpayer dollars are then, often times, used to fund the religious education of students. In addition, students who attend private and religious schools through vouchers are deprived of critical civil rights protections that would otherwise be afforded to them in the public system, including students with disabilities.

In fact, students with disabilities are often systematically excluded from voucher programs. For example, a report from the U.S. Department of Education (the agency DeVos now heads) on the voucher program in Washington, D.C., found that the main reason why students didn’t use a voucher offered to them was that they were unable to find a participating school with appropriate services for their learning or physical disability or other special needs.

Despite all of this, the Trump administration budget proposal that was unveiled on Tuesday includes a request for a new $250 million dollar voucher program. This request comes at the same time as the administration is proposing jaw-dropping cuts in education funding.

Additionally, the Trump/DeVos budget proposal includes $1 billion in “portable” grant funding under Title I, meaning that the money follows individual children rather than being dedicated to high-poverty districts and schools. This allows states to redirect funds away from low-income schools towards schools with a large percentage of wealthier students.

The law says that separate but equal is never equal and recognizes the need to ensure state compliance with federal civil rights laws and to create equal opportunity for low-income students. There is an essential role for the federal government to play in working to eliminate discriminatory barriers, including the discrimination, segregation, and criminalization of students of color at schools. Adding insult to significant injury, Secretary DeVos either fails to recognize this need or is indifferent to it. Neither option is acceptable.

While there has been very little “swamp draining” since the start of the Trump administration, this budget proposal and similar efforts coming from the Department of Education make clear that the intention of Secretary DeVos is to drain as many resources as possible away from our public schools and the students who need them the most.