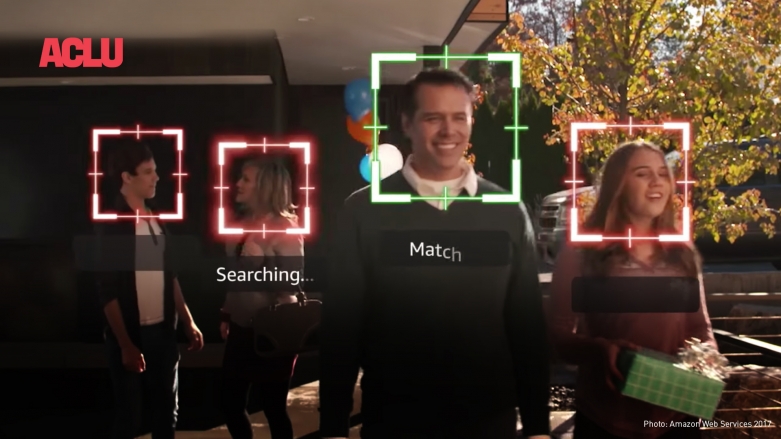 On Monday afternoon, civil rights, religious, and community organizations are taking their demand that Amazon stop providing face surveillance technology to governments, including police departments, to the company’s headquarters in Seattle. The groups will deliver over 150,000 petition signatures, a coalition letter signed by nearly 70 organizations representing communities nationwide, and a letter from Amazon shareholders.

Add your name to the petition today >>>

Monday's action is a part of a nationwide campaign to stop the spread of face surveillance technology in government before it is unleashed in towns, cities, and states across the country.

By making this dangerous technology cheaply and easily available, Amazon is uniquely positioned to spread face surveillance throughout government agencies, and it has been working behind the scenes to do so for years. Documents obtained by the ACLU reveal Amazon is aggressively marketing its Rekognition face surveillance tool to law enforcement in the United States, and even helping agencies deploy it.

Amazon’s size and power — and its nearly ubiquitous Amazon Web Services cloud system — make it easy for the company to offer its face surveillance software as a service for very little money, lowering the bar for even small-town police departments to track people going about their daily lives. App developers can also build easy-to-use face surveillance software for police using Rekognition.

Among other capabilities, the technology provides governments the ability to rewind backwards in time to see where we’ve been, who we’ve been with, and what we’ve been doing.

So far, Amazon doesn’t seem to be getting the message. The company recently defended its push to provide mass surveillance to governments by saying its customers must follow the law, and that it is not aware of “reported law enforcement abuse.” Here’s what Amazon is really saying to the public: So long as we don't know what governments are actually doing with Amazon products, it's fine to use them for mass surveillance and to target communities of color, immigrants, and protesters. And because Amazon doesn’t say how it will monitor for abuse, it is predictable that governments will violate rights by using Rekognition to track people and crowds. In fact, these are the very use cases that Amazon promotes.

Immigrants’ rights, racial justice, and civil liberties advocates nationwide are demanding that Amazon stop making face surveillance technology available to the government. They are guided by a long history of surveillance technologies being used against vulnerable communities, including protest groups like Black Lives Matter, immigrants, and religious minorities.

Face surveillance dramatically expands government power to track those groups and chill First Amendment-protected activity like engaging in protest or practicing religion. Rather than roll this technology out wholesale without public accountability, Amazon should listen to the voices of those impacted communities.

In Boston, coalition partner Student Immigrant Movement (SIM) is organizing with other organizations and Boston residents to bring community control over the Boston Police Department through the #AllEyesonBPD campaign. Valeria Do Vale, the lead coordinator of SIM, sees the local anti-surveillance efforts and the demand on Amazon as central to SIM’s work to protect immigrant communities in Massachusetts and nationwide.

“We got involved with the #AllEyesonBPD campaign for the same reason we signed on to the Amazon demands: Immigrant communities are extremely vulnerable to police surveillance, and we cannot allow any company to make it easier for local law enforcement to track and catalog people’s movements,” Do Vale said.

“Even in sanctuary cities like Boston, we’ve seen that local police share information with ICE behind closed doors — and that information ends up getting our people deported,” Do Vale continued. “For immigrants and our families, surveillance systems like this can mean the difference between freedom and deportation. That’s why we are demanding that Amazon stop selling this tool to government agencies: The stakes are too high.”

Oakland, California, recently adopted a strong surveillance technology ordinance that requires public debate and strict oversight by elected leaders whenever city agencies seek to acquire or use such technologies. Oakland is also considering a measure that would prohibit city agencies from doing business with ICE contractors.

“We are fighting on all fronts to protect the personal information of Oaklanders from federal agencies such as ICE,” says Brian Hofer, chair of the Oakland Privacy Advisory Commission and core member of Oakland Privacy, a signatory to the Amazon letter. “By helping governments deploy dangerous mass surveillance, Amazon is choosing to put diverse communities like ours at risk.”

And in California’s Santa Clara County, home to nearly 2 million people, local elected leaders acting under their own surveillance oversight ordinance voted in January 2017 to impose a moratorium on the use of face surveillance with officer body cameras. This followed a robust local debate. Zahra Billoo, executive director of the Council on American-Islamic Relations in the San Francisco Bay Area, considers Amazon’s face surveillance as a threat to public safety:

CAIR-SFBA works in communities that live under fear of and actual surveillance. Guilt and innocence matter less to law enforcement today than vague descriptions, ethnic identities, and activism. Rekognition amplifies these concerns by increasing access to and use of surveillance systems, under the guise of public safety while instead empowering the police departments who use it with increased access and authority.

Seattle has long had a strong, active, and diverse coalition supporting public transparency around surveillance technologies. Among other victories, this coalition recently won passage of the Seattle Surveillance Ordinance, one of the strongest ordinances of its kind. Groups in the area representing domestic violence victims, immigrants, diverse faith communities, labor, and various ethnic communities all signed onto the call for Amazon to stop selling face surveillance technology to governments.

“Muslim communities already feel under attack under the current federal administration,” said Jasmin Samy of coalition partner Council on American-Islamic Relations-Washington. “Surveillance technologies have been used against our communities in the past — for example, in New York City, automated license plate readers were used to track vehicles coming to and from mosques. Face surveillance in the hands of government will only accelerate that trend, making this kind of chilling effect on our faith more pervasive."

The United States incarcerates more people per capita than any nation on earth, by far. Our criminal legal system is beset by racial discrimination and disparities at every stage of the system, from stop and frisk to arrest, all the way through prosecution, incarceration, probation, and parole. This bias is pervasive in the mug shot databases that can serve as the foundation for face surveillance systems.

And across the country — even in cities that limit their cooperation with federal immigration authorities — police departments are putting immigrants at risk by sharing information with ICE. At law enforcement “fusion centers” nationwide, state and local police work closely with the FBI, which has routinely faced criticism for targeting Muslims, its general hostility to the Islamic faith, and its conflation of dissent with terrorism, most recently by identifying Black Lives Matter activism as “Black Identity Extremism.”

Historically, police departments have unleashed new surveillance technologies without waiting for community input or even laws to govern their use. This is intolerable with a technology like Rekognition, which gives law enforcement an authoritarian form of control to wield in the dark.

We cannot blindly stumble into an artificial intelligence-powered surveillance state overseen by corporations interested in expanding their profit margins and police departments committed to exercising limitless power. True public safety — especially for people of color, Muslims, immigrants, and dissidents — requires that we stop the spread of face surveillance before it’s too late.

IF YOU HAVEN’T SIGNED THE PETITION TO AMAZON, IT’S NOT TOO LATE. WE ONLY WIN IF WE FIGHT >>>

Kade Crockford is the director of the ACLU of Massachusetts Technology for Liberty Project. This blog post was originally published on ACLU.org.