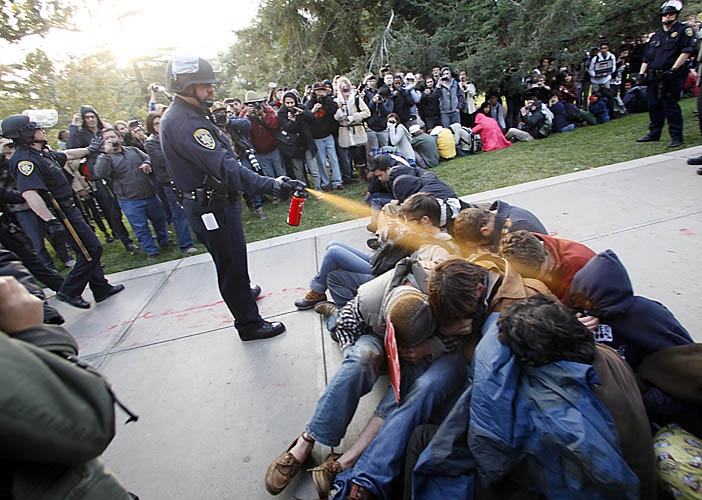 In spite of college campuses being the quintessential First Amendment “marketplace of ideas,” we have seen in recent years official efforts to stifle and chill student protestors’ right to free expression.

In one of the most egregious examples etched clearly in the minds of activists across the country, UC Davis police viciously pepper-sprayed and arrested nonviolent student protestors participating in the Occupy Movement for taking part in a peaceful assembly on their campus quad in November 2011.

At the time, Occupy protests were taking place at college campuses all across the state and the country, and the UC Davis police’s actions had a chilling effect throughout the state’s universities and colleges.

The ACLU of Northern California filed a federal civil rights lawsuit on behalf of the seventeen UC Davis students and two alumni who were brutally pepper-sprayed and arrested that day, seeking damages for their injuries as well as new protest and demonstration policies for the Davis campus. The lawsuit succeeded on both counts.

The process of developing completely new UC Davis policies involved months of direct negotiations with the campus police chief, as well as public forums and discussions on campus that involved university officials, students, faculty, and outside advocacy groups, including the ACLUNC. It culminated in August 2014 with the announcement that the university had adopted a new Freedom of Expression policy that incorporated the substantial changes in the UCD Police Policy Manual.

On paper at least, these new policies are extraordinarily speech-protective, and can serve as a model for other campuses. Among the most significant changes are:

These policy changes are only as useful as they are implemented, and the first step towards implementation is informing members of the campus community of these new policies as a tool and resource in support of their right to speak and demonstrate freely on campus, along with ACLU’s Know Your Rights guide to free speech and demonstrations. We encourage members of the UC Davis community to take advantage of this official recognition of the campus as a public forum for the expression of a broad and diverse range of ideas and viewpoints, regardless of their being unpopular or dissenting views.

If you are concerned that your freedom of expression rights are being violated, don’t hesitate to contact our legal intake line at 415-621-2488 or get help online.

Laila Fahimuddin is an organizer with the ACLU of Northern California.