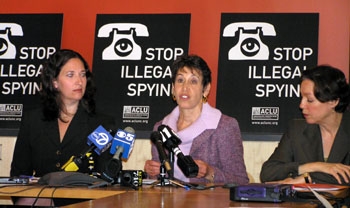 The ACLU has sued telecommunications giants AT&T and Verizon to stop them from continuing to provide the National Security Agency (NSA) with the personal phone records of millions of California customers.

Articles in USA Today and elsewhere revealed that the telephone companies have been providing the NSA with customers’ private records since September 11, 2001. Records given to the NSA include phone numbers for both incoming and outgoing calls, as well as the time, date, and duration of each call.

This information was turned over without customers’ knowledge or consent, and without any court order, warrant, or other proper legal process.

The ACLU is asking the court to do the following:

Nationwide, 20 other ACLU affiliates have filed complaints with local Public Utility Commissions, state attorneys general, and other officials demanding investigations into whether local telecommunications companies allowed the NSA to spy on their customers.

Although Verizon has denied the allegations, its denials have been equivocal.  AT&T has said that it can neither confirm nor deny the charges that it has turned over telephone records to the NSA.  Several members of Congress have confirmed that AT&T and MCI, which Verizon acquired in January, have provided calling records to the NSA.

The State of Surveillance: Government Monitoring of Political Activity in Northern and Central California