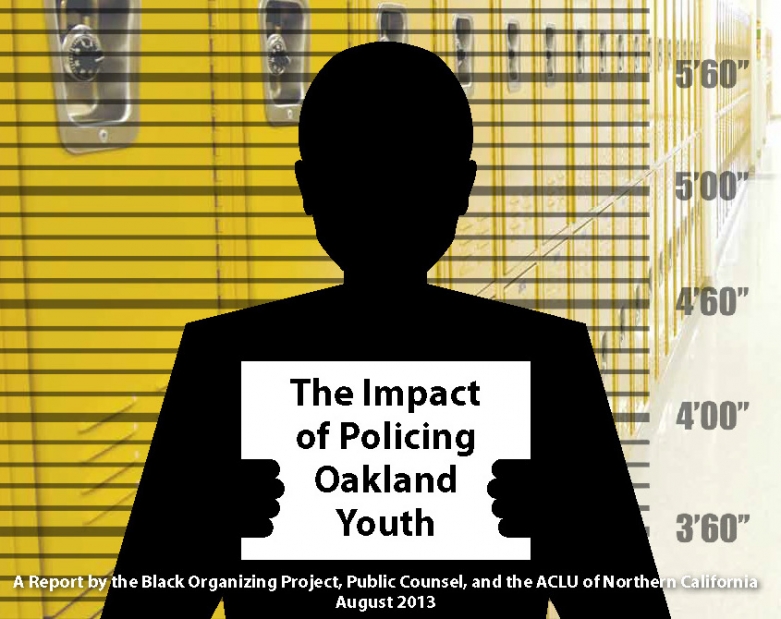 Oakland police are arresting school-age African American youth at shockingly high rates, contributing to a burgeoning education crisis for students of color, according to a new report released today by the Black Organizing Project, ACLU of Northern California, and Public Counsel. The report, "From Report Card to Criminal Record: The Impact of Policing Oakland Youth," reveals disturbing trends about police interaction with Oakland's youth of color and especially with African-American boys.

According to data obtained by the groups:

"You can draw a straight line for too many of Oakland's black students from report card to criminal record," said Jacquelyn Byers, director of the Black Organizing Project. "Arrests and law enforcement contacts are driving students away from school and toward the criminal justice system, and police need to be part of the solution to our city's education crisis."

The report calls on Oakland leaders to promote policing alternatives such as positive behavior support that will help create safe, nurturing schools; make OUSD and OSPD accountable to the public through the new OSPD Complaint Policy approved by the board of education last year and create data systems that clearly and completely track police interactions with Oakland children; and limit the role of police to emergency response.

“Oakland’s overreliance on policing is driving black students away from school and contributing to the crisis in our community,” said Laura Faer, statewide education rights director for Public Counsel. “When we use alternatives that work, such as restorative justice and positive behavior support, suspensions decrease, student achievement increases and the need for police decreases too. The time to change this story is now.”

The Black Organizing Project, a Black, community-led, grassroots organization working for social and racial justice in Oakland, will report to the Oakland Unified School District (OUSD) Board of Directors tonight at the regularly scheduled school board meeting beginning at 6 p.m. Speakers will include OUSD parents, students impacted by over-policing in Oakland and community advocates for Oakland youth.

Download "From Report Card to Criminal Record: The Impact of Policing Oakland Youth" »

Misha Cornelius is the Communications Coordinator at the Black Organizing Project.