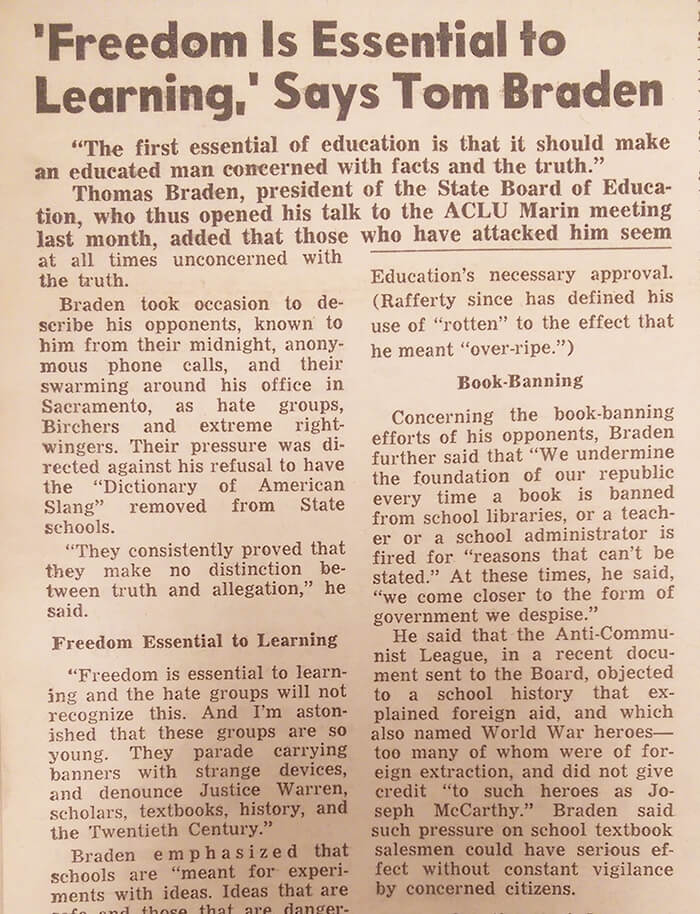 Fifty-four years ago, the Anti-Communist League tried to ban books and curriculum from school libraries that they deemed “un-American.” As the featured speaker at an ACLU meeting, Tom Braden, president of the California State Board of Education, reacted in horror and defiance to blatant attempts to stifle free speech:

“The first essential of education is that it should make an educated man concerned with facts and the truth. . . . They [the Anti-Communist league and the extreme right] consistently proved that they make no distinction between truth and allegation. . . . Freedom is essential to learning and the hate groups will not recognize this.”

Braden’s comments came in the “red-baiting” era, a disturbing trend in California and U.S. politics in which the mere accusation of communism was enough to denounce and reject a person, group, or idea. Red-baiting allowed anti-communists to censure and dismiss opponents without having to address the claims or arguments they put forward. It was enough to merely label someone as anti-American to silence them.

Such tactics are all too alive today, rekindled through the call to “Make America Great Again.”

During the last four weeks of the 2016 election cycle, I was placed at a county Republican headquarters as part of a fellowship. While there, I witnessed firsthand how then candidate Donald Trump’s open contempt for the free press was mirrored and picked up on the ground by his campaign.

I saw how news or information that did not fit Trump’s agenda, whether from the media, think tanks, or the government, was derided as establishment propaganda and deemed unpatriotic. I saw how open falsehoods and racism, from labeling Mexicans as rapists, calling Obama the founder of ISIS, and claiming that inner-city crime is at record levels (to just touch on a few) were touted to justify building walls, rejecting refugees, and demanding law and order instead of police accountability.

And now, nine months later, I see the same disregard for facts and truth take form through the policies that President Trump is championing and trying to implement. The lies that once buoyed abstract campaign promises are now mobilized to dismiss science, disenfranchise voters, and ban immigrants and refugees based on religious affiliation. Instead of being rooted in reasoned debate, empirical analysis, and open deliberation, the justification for these policies weaponizes American identity to exclude certain identities and beliefs.

Trump uses patriotism in the same way the House Un-American Activities Committee did half a century ago – to delegitimize and silence entire groups of people.

He does so through rhetoric. When he calls the media the “enemy of the American people,” he’s essentially red-baiting, laying claim to what speech is patriotic and what isn’t, in order to censure and shutdown public debate. And he (as well as many state legislatures) do so through proposed legislation – using xenophobia and baseless, repeatedly disproven assertions of mass voter fraud to try to enact restrictions that will disproportionally disenfranchise underserved populations and people of color.

I believe these tactics allow Trump and those who push his repressive political agenda to not have to contend with the logic or arguments of what they condemn. Instead, legitimate grievances are twisted and manipulated, racialized, and turned into weapons of fear, all under the specious guise of American loyalty and patriotism.

The ACLU stood against the government and the anti-communist fervor because we believe freedom to be essential to learning and democracy. With freedom of speech and the right to vote comes the freedom to question, to be represented, and to challenge the political system. It is the freedom to reason, to seek the truth, and to not be blinded by ideology or fear. And it is these freedoms that we must cherish and protect. Dissent is patriotic.

Brady Hirsch is a Communications Associate with the ACLU of Northern California.