Reflecting on the 50th Anniversary of the March on Washington and Dr. King's 17,000 Page FBI File 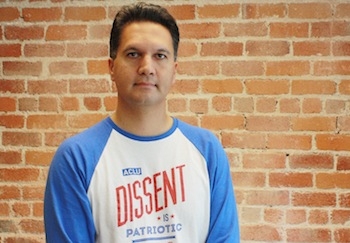 It's been fifty years since the historic March on Washington for Jobs and Freedom, and 150 years after the Emancipation Proclamation. There are still many steps in this country's long march from slavery toward equality and racial justice.

As we reflect on the legacy of the March on Washington, we also should remember that Dr. King didn't just have a dream, he also had a 17,000 page FBI file. Before Dr. King became the universally embraced hero that he is today, he was vilified by much of the American public and many elected officials, and was the target of surveillance by the government itself from 1958 until his death. Many other men and women who were the organizers of that march and of the civil rights movement generally were also the subject of surveillance by the federal government.

I see marches – and in particular the March on Washington – as the manifestation of the First Amendment.

What is a greater embodiment of the freedom of association than to gather together for a common cause?

What is a greater embodiment of the freedom of speech than the leaflets march organizers passed in neighborhoods across America, the signs and placards the marchers carried on that summer day, and of course the speeches themselves given on the steps of the Lincoln Memorial?

What is a greater embodiment of the freedom of the press – for march organizers to make civil rights a national story or for the press to cover the march or the activities of Freedom Summer in Mississippi the next summer?

And what is a greater embodiment of the right to petition government than to demand the passage of laws to protect civil rights, the right to vote, and provide for economic opportunity.

Inherent to the ability to exercise the First Amendment right is the idea that we the people must be able to organize ourselves and make demands on government. For those rights to be meaningful, it means we need to be able to exercise them independently of government, free from surveillance, harassment and intimidation. And for the rights to be meaningful, they must apply to those whose voices are controversial and challenge the practices of government.

Many people are asking, what would Dr. King speak out about today? I am certainly interested in that question, but I am also interested in a different one: Would the government be aiming its sophisticated surveillance tools on Dr. King and his fellow march organizers? Given our current technological reality of email and other forms of online communication, we communicate in ways that lend themselves easily to pervasive government monitoring. Recent disclosures in the news by Edward Snowden and others reveal a system of dragnet, warrantless government surveillance greater in scope and power, and subject to far less oversight, than has previously been known.

Imagine how much harder it would have been for civil rights workers to organize if J. Edgar Hoover had been able not just to wiretap a few phones, but to monitor every one of their communications. Or if Bull Connor could comprehensively track the movements of the Southern Christian Leadership Conference and Student Nonviolent Coordinating Committee as they went from one secret planning meeting to the next, all without warrant.

For the First Amendment to be meaningful, it means that we as people can exchange ideas freely, communicate them, and organize without improper surveillance or interference from government. As we celebrate the legacy of the March on Washington, let's recommit ourselves to the goals of racial justice, the promise of the First Amendment, and the privacy rights that are crucial to all social justice efforts. The full scope of Dr. King's FBI files won't be released until 2027. It may yet take a generation or two to get full disclosure on our current surveillance state. But meanwhile, we keep marching.