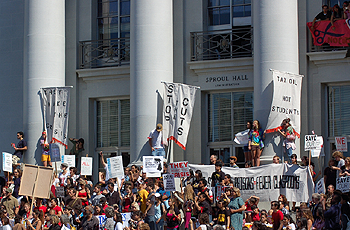 Yesterday, the Education Department's Office of Civil Rights dismissed three complaints that had been filed against the University of California, on the grounds that the complaints were based on constitutionally protected speech. The complaints had alleged that the activities of students critical of Israel's policies had created a hostile environment for Jewish students at the Berkeley, Santa Cruz and Irvine campuses. The American Civil Liberties Union of Northern California became involved because the complaint raised two important, and sometimes conflicting, rights: the right of students to attend university free from a pervasive hostile environment based on their race or religion, and the right of students to speak out strongly on campus about controversial political issues.

The ACLU-NC determined that these complaints were based on the constitutionally protected speech activities of students who were expressing their strong opposition to the policies of the state of Israel, speech that lies at the heart of the First Amendment. In correspondence with the Office of Civil Rights of the Department of Education, the ACLU asserted that the government cannot abridge the expression of political viewpoints, even if controversial and even if some students find the speech upsetting or offensive, especially at a public university which should be a true market place of ideas.

First Amendment protections are most important when speakers take controversial or unpopular positions that might arouse strong feelings, passions and hostility. There are no sacred cows when it comes to the First Amendment's protections for political messages or viewpoints.

The Office of Civil Rights dismissed all three complaints on the grounds that the "mere expression of views, words, symbols or thought that a student finds personally offensive" is not sufficient to violate federal civil rights laws. This important decision sends a message to universities and colleges around the country: that the campus must continue to serve its traditional role as a place where student activists can speak out strongly on controversial issues without facing discipline or arrest.