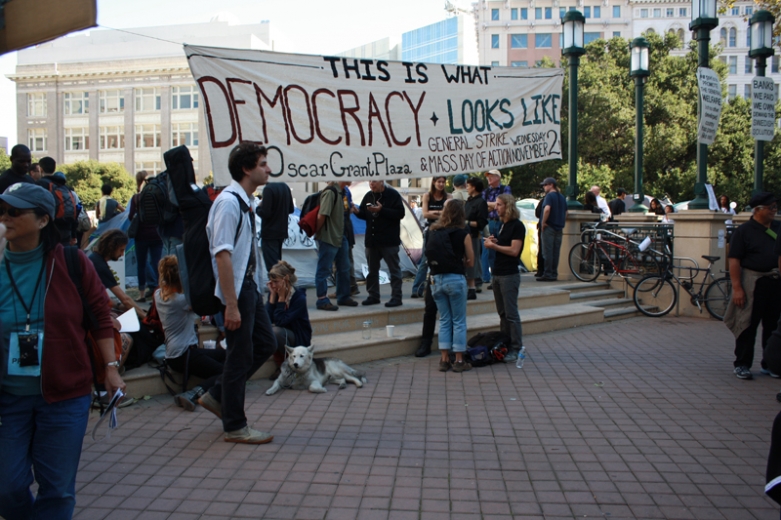 The day after an enormous peaceful demonstration, and the first general strike this country has seen since the 1940s, some of the focus has turned to bonfires and tear gas. But as we continue looking into what happened during late-night clashes between demonstrators and the police, let's not forget the voices of the thousands upon thousands of people who peacefully came together and marched through the streets of Oakland. That's the First Amendment in action.

From morning to night, people gathered and made their views heard in response to Occupy Oakland's call for a general strike and a march to shut down the Port of Oakland. Police presence was minimal throughout the day. In fact, the police were rarely even seen in downtown Oakland and along the march route. Instead, we saw people from all walks of life, coming together to stand up for their beliefs and to advocate for social and political change. People chanted, discussed politics, and played music. There were school children, workers, families, and retirees. And there was mutual respect for this multitude of people and their views. This is the very essence of our constitutional democracy. This is the essence of the First Amendment.

Of course, we still have concerns about what happened later that night during clashes between demonstrators and police, and we continue to investigate and demand that the police provide us with information about what they did. But yesterday's main takeaway is that the First Amendment works. As many as 10,000 people can speak out, without any need for tear gas, or flash grenades, or lines of police in riot gear. This is how our democracy and our right to free speech should work, and yesterday showed that this is how it can work.

Michael T. Risher is a staff attorney with the ACLU of Northern California.