Why Can't I Use the Boys' Bathroom at School? 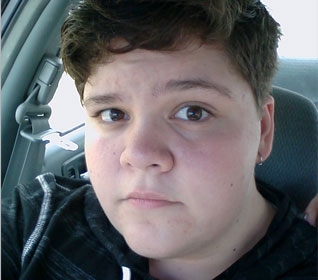 In the summer of my freshman year I got the courage to tell my mother something that I had known for a long time: I'm a boy. She had nothing but love and support for me.

By the time school started, I was ready to go back as my true self – Gavin Elliot Grimm.

I am a boy

At the beginning of the school year, I used the nurse's bathroom. I was afraid of potential harassment and wanted to take things slowly. I soon found out that my fears were not only unfounded, but going to the nurse's bathroom was causing me substantial anxiety and unnecessary inconvenience.

Because many of my classes are located quite far from the nurse's office, trekking back and forth took a good amount of time away from classroom instruction. But what's more, the experience was humiliating. It was a glaring reminder of my differences, one that caused me significant discomfort every time I had to use the restroom.

After approaching my school with these concerns, my principal afforded me the rights of every other boy at Gloucester High School. I was allowed to use the boys' room. Events proceeded without incident. I used the bathroom and left, just like any other student. Not once did an altercation occur in the restrooms.

However, on November 10, my family was informed that my school board would be voting on whether or not to limit the use of male restrooms to those students who correspond with the male sex biologically the following day. No one had informed us of this beforehand. We scrambled to get ready for the meeting the following night, and were relieved to have the vote pushed back to December.

Unfortunately, on December 9, despite all the voices in support of me, my school board voted on a discriminatory policy that restricts use of male and female facilities to those of a corresponding biological sex. That night, I was promised access to unisex restrooms starting the following day. They were not actually opened until several days later. The school board may think they solved the problem, but being offered a unisex bathroom still singles me out from other students since I'm the only one required to use it.

I am boy, and it is important to me to live life like other boys do, including using the boys' bathroom. I am disappointed that the school board decided to ignore my best interest, including others in the same situation, and chose to adopt a policy that is discriminatory and spreads fear and misinformation. This needs to stop.

My family contacted the ACLU and is working with them to file a complaint with the Department of Justice in order to make Gloucester High School safer and more inclusive to transgender youth while hopefully encouraging other local schools to do the same.

Gavin Grimm is currently fighting with the ACLU for transgender rights at his high school in Massachusetts.