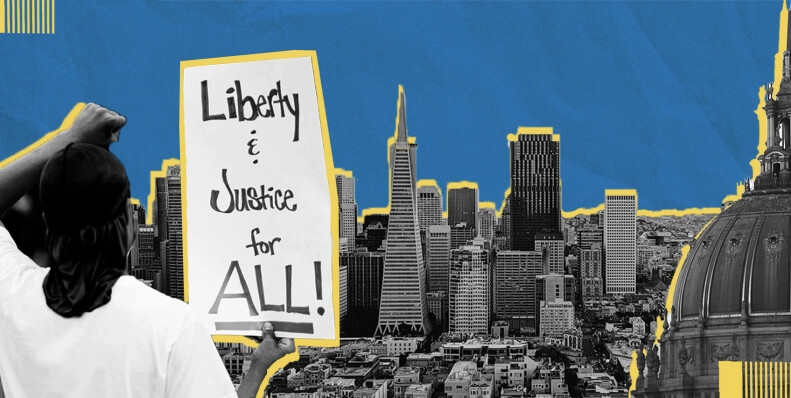 The ACLU of Northern California advocates for public safety policies that are consistent with the values of civil liberties and civil rights. We expect the San Francisco district attorney to pursue reform, reduce incarceration, hold police accountable when they break the law, and root out racial bias in the legal system.

However, District Attorney Brooke Jenkins has reversed or weakened many of the reforms advocates credit with creating a more equitable criminal justice system in San Francisco.

Below, we explain why Jenkins’ policies are harmful.

Under California law, cash bail provides an incentive for people to show up for court proceedings. One of the primary flaws of the cash bail system is that it relies solely on wealth to determine whether someone is detained while they await resolution of their case.

If they can’t afford bail, people who have not been convicted of a crime may languish in county jail while more affluent people facing the same charges are released. Studies have found that people who are detained pretrial are more likely to be convicted and receive longer sentences.

Jenkins’ policy allows prosecutors to seek cash bail in some situations “to protect public safety” where there may be little risk of physical violence to anyone, such as misdemeanor cases involving shoplifting or possessing drug paraphernalia.

DA JENKINS' POLICY: Prosecute 16- and 17-year-olds as adults in “heinous” cases such as homicide.
BOTTOM LINE: Ignores science of brain development and is more likely to be used against Black and Brown youth.

Because the brain continues developing until the mid- to late 20s, adolescents are immature, impulsive, and vulnerable to peer pressure. But they outgrow these traits over time and have a profound capacity to change.

Adult prisons are no place for vulnerable teens, who are at heightened risk of physical violence and emotional trauma. Such harrowing experiences inhibit a young person’s development and may increase recidivism. It’s worth noting that youth who are charged in the juvenile system can remain incarcerated until age 25.

DA JENKINS' POLICY: Charge people cited five times for using drugs in public or possessing drug paraphernalia and send them to drug court for compulsory substance use treatment.
BOTTOM LINE: Criminalizes addiction, which does not reduce substance use.

Decades of public health research has taught us that criminalizing addiction does not work and that drug courts are not an effective way to connect people with treatment.

After more than 50 years of fighting the failed War on Drugs, we know we can’t arrest our way out of a public health crisis.

Studies have shown that interactions with the criminal legal system exacerbate the underlying medical and mental health problems fueling substance use disorders. Resuming drug use after a period of coerced treatment or incarceration increases the risk of overdose given a person’s reduced tolerance to a particular substance. Individuals are 129 times more likely to die in the first two weeks after incarceration due to opioid overdose than the general population.

These consequences fall most harshly on low-income Black, Brown, and Indigenous people who are surveilled, arrested, and prosecuted for controlled substance use more frequently than their white, wealthier counterparts.

Increasing sentences for drug-related activity does not deter substance use or reduce the availability of drugs; it only consigns more people to our dangerously overcrowded jails, removes individuals from their families and communities, squanders scarce public resources and worsens the overdose crisis.

We fear this policy will sweep up people who are suffering from substance use disorders themselves and human trafficking victims who have been forced into selling drugs, while failing to provide adequate social supports or economic opportunities for individuals selling for subsistence reasons.

San Francisco must invest in overdose prevention programs and permanent supportive housing. The city also should distribute the opioid overdose antidote naloxone to people who are most likely to witness an overdose, including substance users, their friends, and family.

An Overdose Death is not Murder: Why Drug-Induced Homicide Laws are Counterproductive and Inhumane
Drug Policy Alliance (2017)